Lamborghini has revealed its latest model, but you won’t need to win the lottery in order to take the controls of the Lamborghini Lambo V12 Vision Gran Turismo. That’s because, as the name suggests, it’s set to debut in Gran Turismo Sport rather than on the road or a real-world track.

It means the automaker can be liberated from such considerations as practicality – not that a Lamborghini is ever especially concerted with such a principle – together with emissions standards, crash-testing, and all of the other downers that car companies are expected to think about when they launch a new model. As a result, the Lambo V12 Vision is one of the most distinctive vehicles from the automaker’s design team in a while. 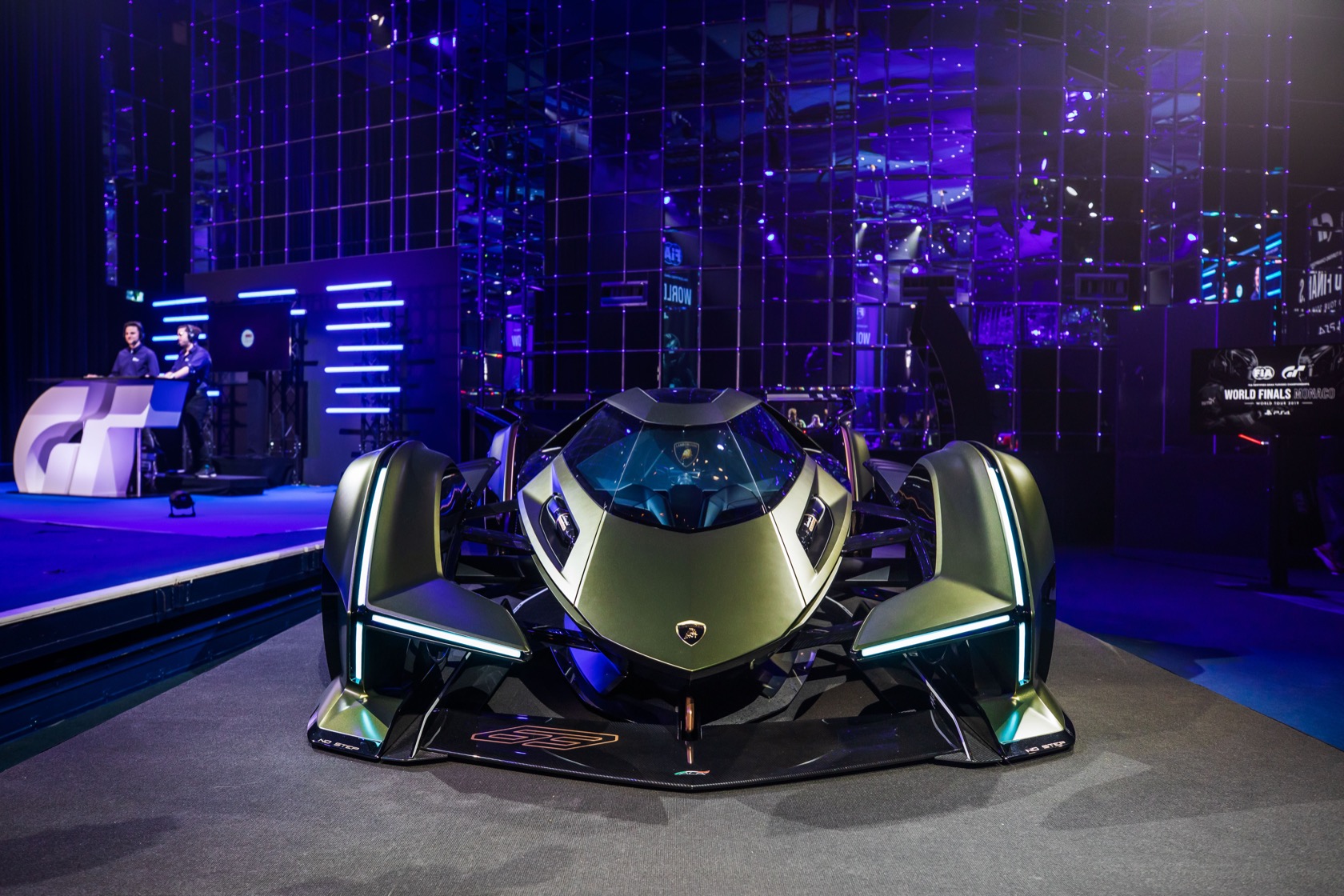 The single-seater is the handiwork of Lamborghini Centro Stile in Sant’Agata Bolognese, the company’s Italian design studio. Existing and classic themes from the Lamborghini history books are clearly evident, like the focus on a single center line to guide the car’s silhouette. However extreme aerodynamics play just as significant a part. 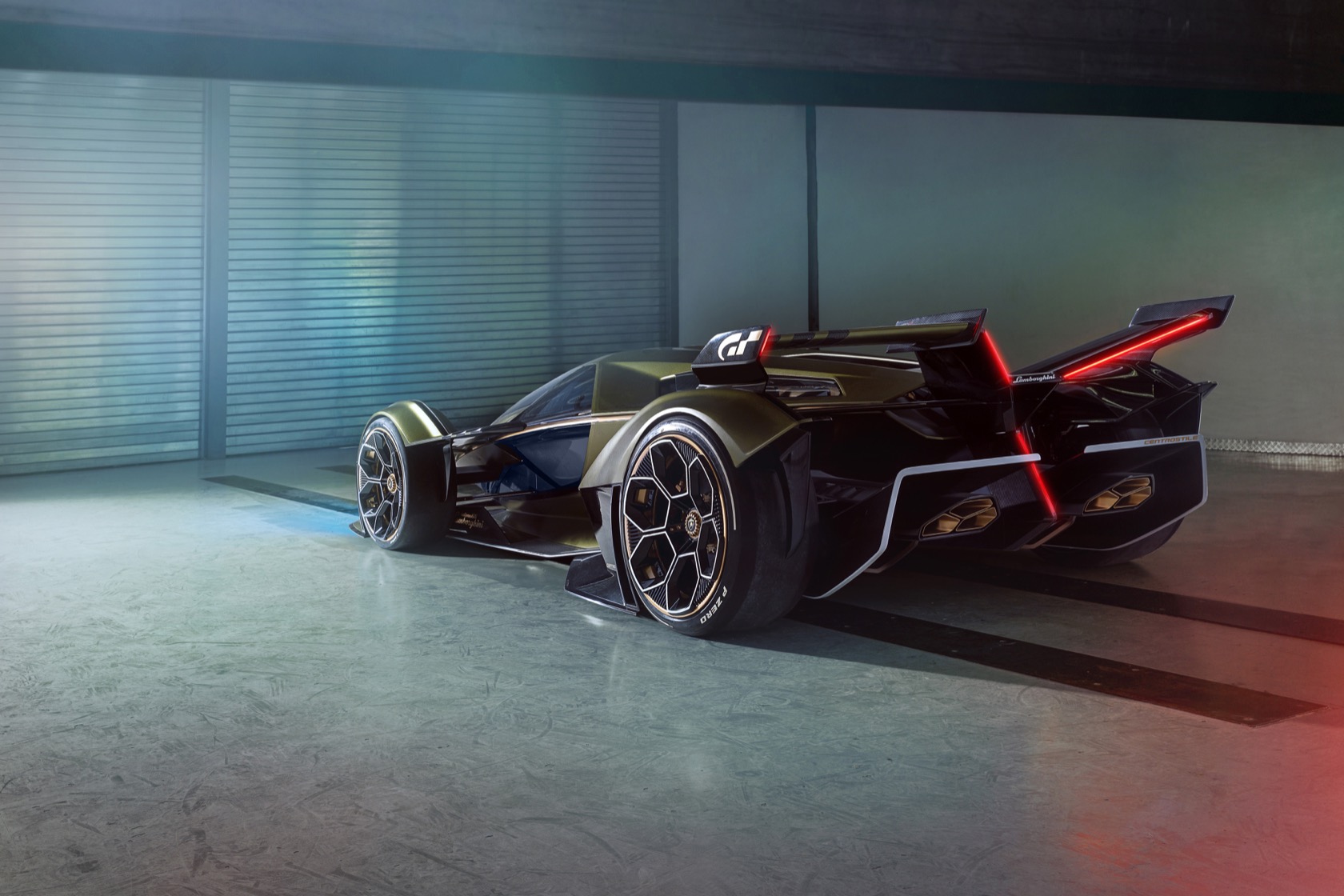 The main body is isolated from the fenders, while there’s a vast rear wing for downforce. It also integrates the Y-taillight design, and there are Y-signature front and rear clusters too, as on Lamborghini production vehicles. The automaker says that the hexagon-inspired side window theme is a nod back to the classic 1968 Lamborghini Marzal. A thoroughly modern Lamborghini Sián FKP 37 drivetrain – a hybrid V12 with 819 horsepower – is under the bodywork.

Inside, the driver finds all their controls mounted on the racing-style steering wheel. Obviously back in the real world it will be a more humdrum game controller doing the heavy-lifting, but Lamborghini’s vision is a yoke-like wheel with various buttons, knobs, and embedded displays. 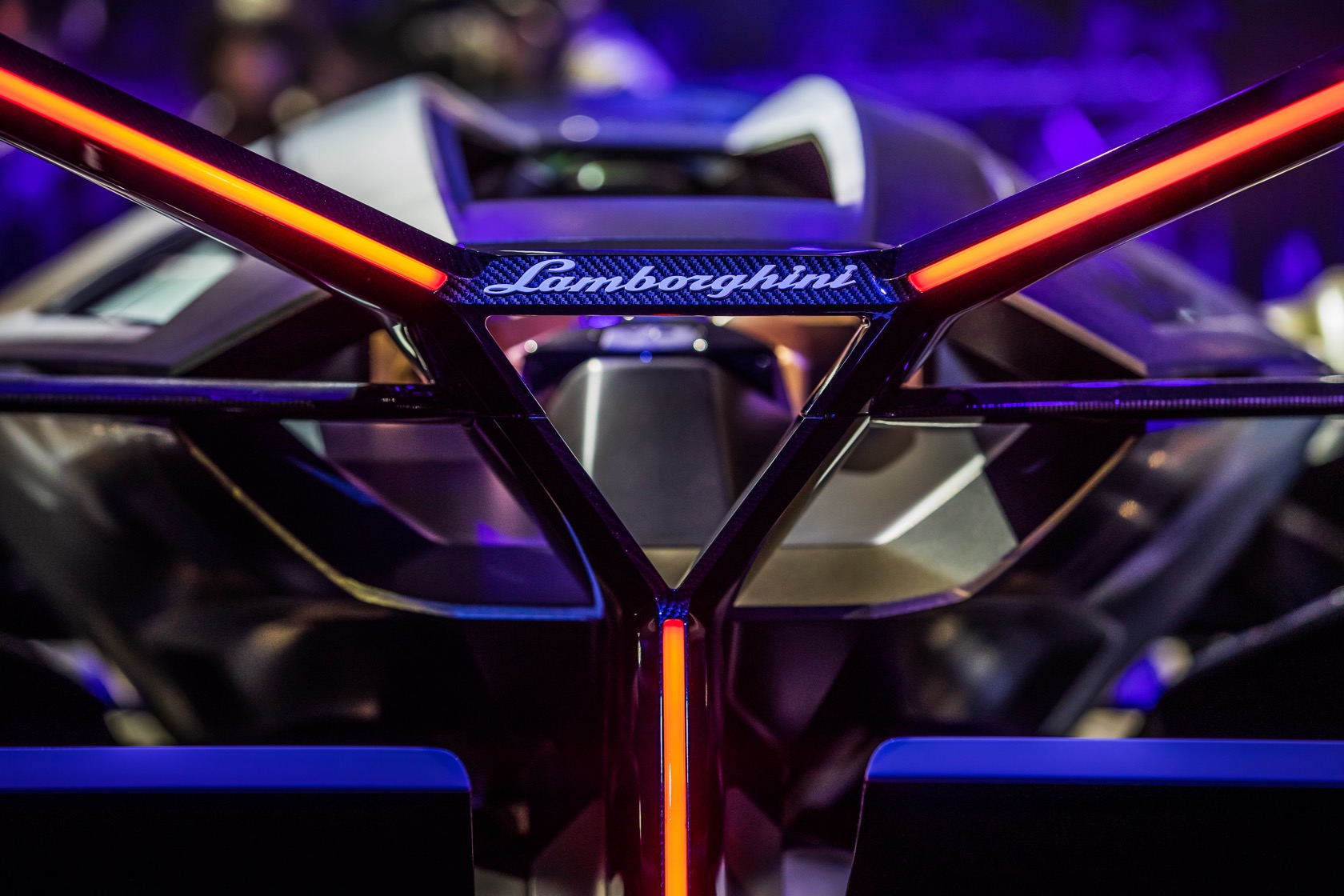 Rather than traditional instrumentation, Lamborghini envisages the Lambo V12 Vision Gran Turismo driver using a virtual display. All the graphics and metrics would be projected in front, over the top of the track itself, allowing them to never look away from their racing line. 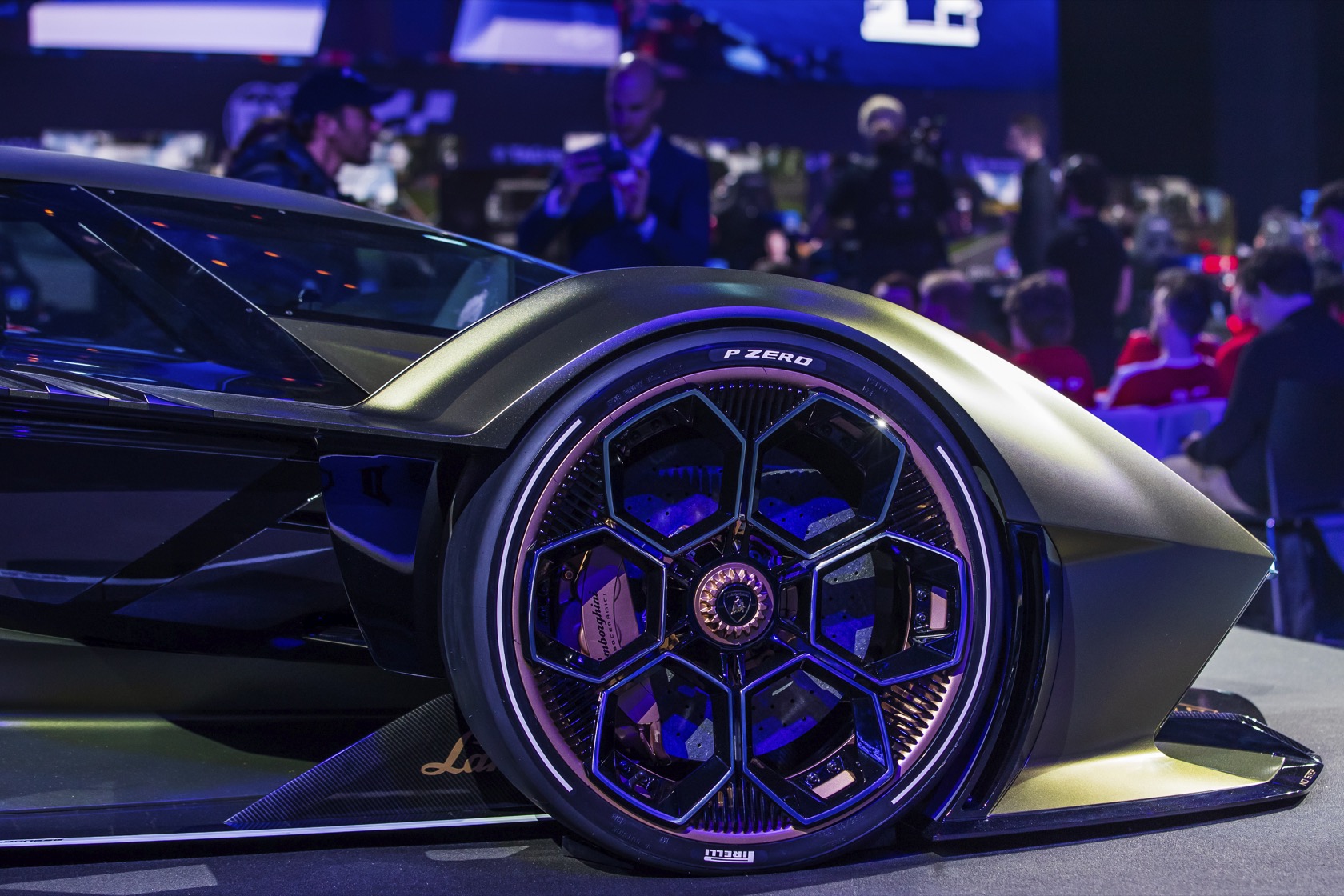 Something else that’s right in front of the car is the route of entry. Rather than anything so mundane as climbing into the racer via side doors, Lamborghini says that the driver will clamber in at the front like a jet fighter pilot. Hopefully one that is feeling flexible. 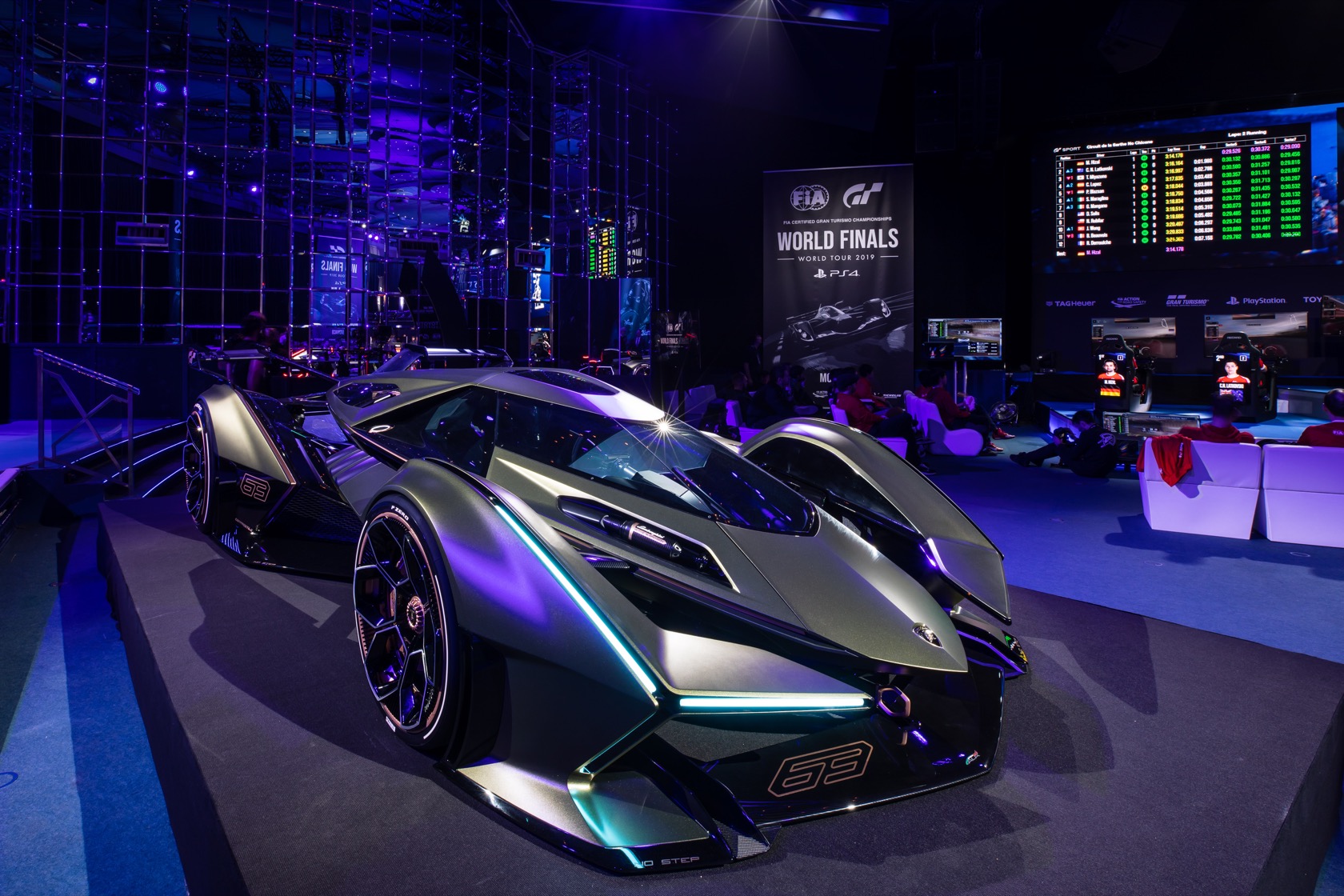 For Lamborghini, it’s an opportunity to try out some new design ideas, free of the need to think about cost balances or practicality. It’s not the first automaker to succumb to the temptation in recent months, either. Last month, Jaguar showed off its seductive new all-electric supercar, the Jaguar Vision GT Coupé, which is also headed to Gran Turismo

The Lamborghini Lambo V12 Vision Gran Turismo will arrive in the game from Spring 2020, the automaker says. Sadly for those of us hoping to take a ride in real life, it doesn’t look like that’s ever going to happen.