Backup devices are generally at the “less glamorous” end of the gadget scale, but ironically some of the most important. Not having the very latest smartphone or gaming device may be frustrating, but not as much as discovering the hard-drive in your computer has crashed and taken with it all your files, multimedia and other content. LaCie is hoping its CloudBox will prevent some of those headaches, a local/cloud double-act that pairs a simple network drive with a companion web backup service. Setup is, so the promise goes, simple; problem is, you pay for that convenience. Is the CloudBox heaven-sent or an unwelcome stormfront? Check out the full SlashGear review after the cut.

Generally speaking, there’s local backup and remote backup. Local, as the word suggests, is on-site: anything from burning a DVD of important files and keeping it in your desk drawer, to a USB (or eSATA, or FireWire, or some other connection) hard-drive you plug in directly, or a network-attached storage (NAS) device that serves one or more computers on your local wired or wireless network. Remote backup could be as simple as leaving a copy of your home DVD or HDD files at work or with a friend, or – more commonly now – online in some sort of “cloud” repository.

Redundancy is another key part of backup: basically, how resilient the backup system itself is to hardware failure (and other issues, like theft or damage). Burning two DVDs rather than one is redundancy, but more common is using a so-called array of drives (either directly-connected or NAS) that each carry a copy of your data. If one drive dies, the data is safe on the second (or third, or fourth, etc.) and can be repopulated on the new drive you slot in to replace it.

Increasingly popular is a hybrid of local and remote backup, and that’s where the LaCie CloudBox comes in. It consists of both a local NAS drive and a companion online cloud store, automatically copying anything placed onto the drive up into the cloud. 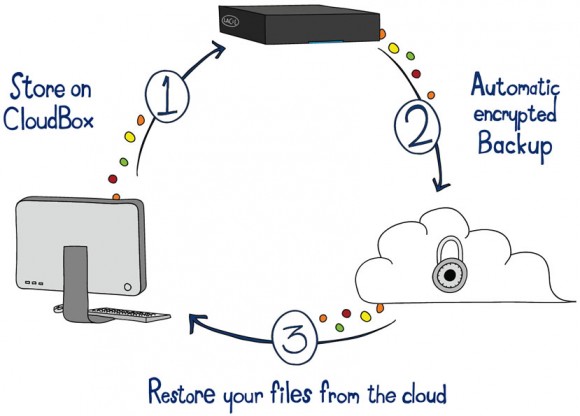 LaCie’s favorite designer, Neil Poulton, does the honors with the CloudBox, though the external drive itself is probably more a case of what was left out than what’s been included. A compact 4.6 x 4.6 x 1.5 inch black plastic box, the only real elements of interest are the recessed status LED in a notch under the leading edge (which flickers blue with varying degrees of frequency while active, and red when frustrated) along with a gigabit ethernet port, power input and button on the back, the latter the only physical control and used to turn the CloudBox on or off. 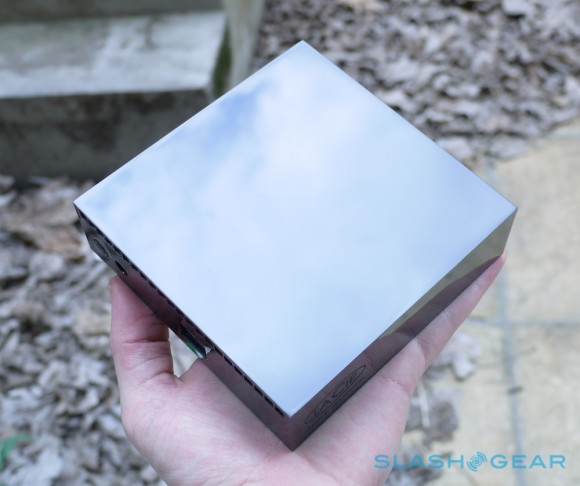 Inside is a 100GB 2.5-inch hard-drive, non-user-accessible. That sounds small and, indeed, it is. Even the most humble of netbooks of recent years have offered more storage, and with some desktop-replacement laptops packing 1TB+ the CloudBox seems hopelessly naive at first glance.

LaCie’s intention, though, is seemingly to force a sense of perspective on the would-be user. Local storage can be capacious and swift; cloud storage is generally more expensive and, being limited by the narrow-bore upload pipe of most home internet connections, time-consuming to shuttle files up to ‘net-based safety. There’s no choice as to which files get replicated online: everything placed onto the local drive is copied to the cloud. Sure, you could dump all of your video files onto the CloudBox, but it’s really more for vital documents: your email backup, your tax returns and all those Word files you’d be distraught to lose; your final year project or your latest work report. 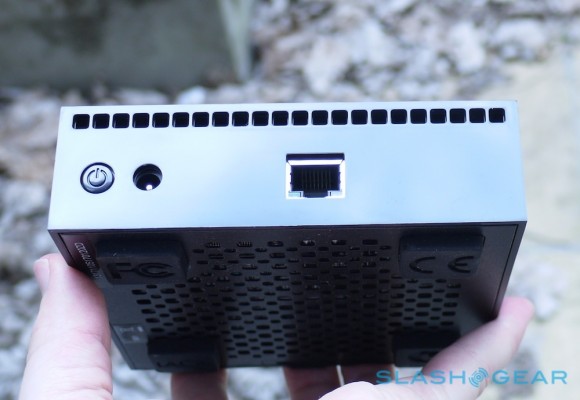 Noise levels from the box, even when the hard-drive is active, are very low. There’s no warning on heat levels, beyond the on-device logs, though the CloudBox will email you notifications when space is running low.

As you’d hope from a product with simplicity as its watchword, setup of the CloudBox is straightforward. Physically, it’s a case of plugging it into a spare ethernet port on your router with the bundled cable, plugging in the power supply and then waiting for the light to steady on blue.

A bundled CD offers LaCie’s Network Assistant tool, basically a CloudBox-seeker which lives in the system tray of your PC or Mac and works as a shortcut to the browser-based setup page. More adept users will bypass it altogether and surf to either http://cloudbox or its IP address (assigned and revealed by your router). First up there’s the Setup Wizard, used to establish an administrator username and password as well as punch in the contract number for the complimentary 12-month subscription to the cloud storage service. 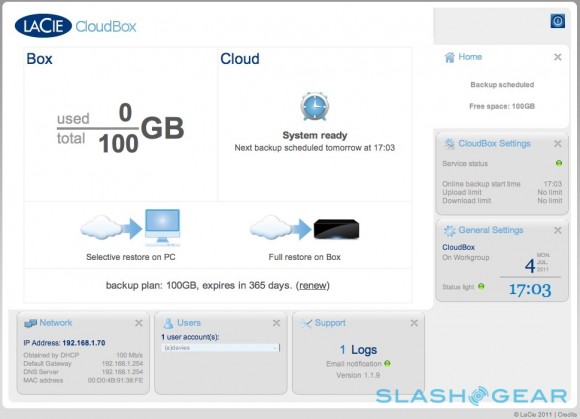 From that point on, anything more complex is optional. You can simply begin dropping files onto the CloudBox – mounting it as a network drive in your OS of choice makes this easier – and relax in the knowledge that they’re being funneled up into the cloud shortly after. By pairing local and remote storage, your computer needn’t be on while the time-consuming upload process takes place: the CloudBox itself handles all that. We whipped out the power cable during the initial upload, then turned the NAS back on and it automatically picked up where it had left off. Obviously, had we taken an axe to the local drive before it had finished uploading, our data would be in so many unrecoverable slices, but simple power failures needn’t be a headache.

There are plenty more settings to be tinkered with in the LaCie CloudBox dashboard, however, including a simple counter showing how many out of the 100GB have been done, and when the most recent cloud upload took place. Some network information, details on user accounts – you can set up multiple users, each having access to their own files but nobody else’s, and optionally with a set quota of the total storage that they can use – together with log records, a countdown to when your cloud backup plan expires and the option to manually set upload and download speed limits so as not to saturate your broadband connection are also easily accessed. 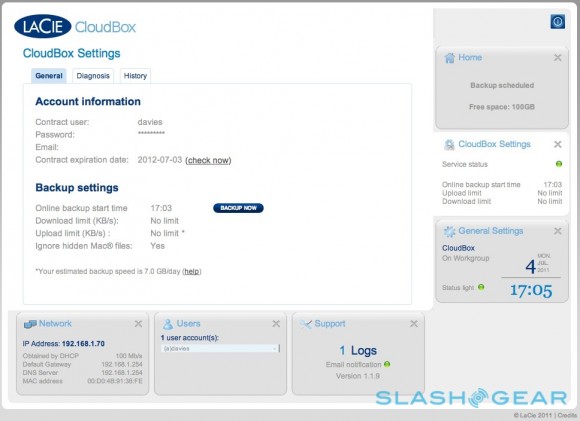 Then there are the restore buttons, either to selectively restore certain files from the cloud to your computer, or to fully restore everything in the cloud to the CloudBox. The latter is useful if the hard-drive in the local NAS dies, and you want to repopulate its replacement (your user settings are also restored). The cloud storage keeps the last ten complete backups, so you can step back through previous versions of files: handy if you discover a file was recently corrupted and that the most recent backup has preserved that corrupted file.

What you can’t do, however, is log into the cloud store and access files remotely. Unlike most cloud-based backup systems, LaCie makes no provision for grabbing files while on the move, either using a browser-based interface or a smartphone app of some sort. The cloud, instead, is resolutely intended as another layer of redundancy; 128-bit AES encryption is applied as standard by the CloudBox itself – before the files ever leave your home or office network – and only your username and password can unlock them.

At $199 (in the US; £179.90 in the UK) for 100GB, the CloudBox is hardly the cheapest external drive we’ve ever seen. For the same amount, or less, you could have a 2TB+ NAS with drive redundancy, though obviously you’d then lack the cloud element of the LaCie option. It’s worth bearing in mind that many NAS drives support online backup too, though you’ll have to set up – and pay for – a cloud backup account; it’s all less straightforward than the CloudBox makes things. 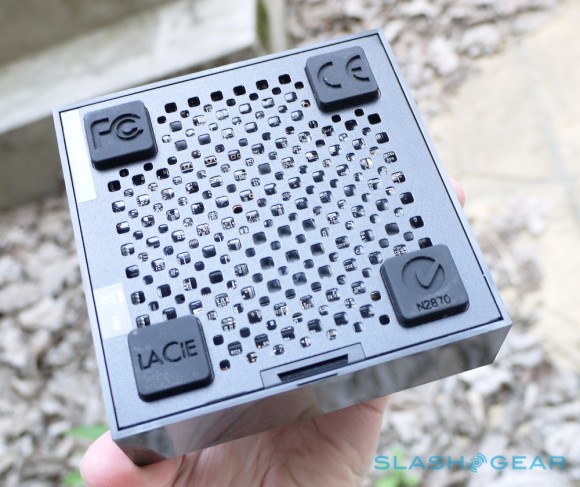 That, then, is what you’re really paying for: simplicity. The CloudBox forces a conscious decision about which files are really important, locks them up with AES encryption automatically, and mirrors up to ten versions online, all after a few minutes setup. A further 12 months of cloud rental is priced at €99 in Europe.

Most users with any amount of network proficiency would probably be able to piece together a cheaper, more flexible local/cloud backup system than the CloudBox. That’s not to say LaCie’s drive misses the mark, however. Whereas a regular NAS might be a weekend’s frustration for basic users – arguably the most likely to avoid backing-up altogether – the CloudBox’s convenience makes it a plug & play option in which the “plug” aspect doesn’t demand a degree in computer science to complete. You could reasonably mail your tech-naive family or friends a CloudBox and expect them to have their essential files secured with minor effort.

What is true is that the CloudBox will most likely only work as one part of a backup solution. 100GB is insufficient for most individual users to fully backup their entire digital lives; share that out with several people, as LaCie makes easy, and that’s an even smaller proportion of each hard-drive covered. Dollar for gigabyte, it’s a wasteful way of preserving all but the rarest of digital music and video collections. A workable system might include the CloudBox for securing documents, precious digital photo originals and email backups, while cheaper external drives (either directly connected or networked) handle space-hungry multimedia. Yes, there’s an extra element of risk, but then that’s the implicit balance you find with any backup strategy.