Kyocera Proteus aims to be a bendable, wearable smartphone

When it comes to flexible displays, Samsung and LG have taken much of the spotlight, employing those latest techniques for a variety of its products, from curved TVs to smartphones. However, that doesn’t mean that other technology companies are taking a backseat. Kyocera, more known in the mobile world for its tough, rugged, and unbending smartphones, is taking a stab at it too. At this year’s CEATEC, it revealed its Kyocera Proteus beta designs. Named after the shape-shifting sea god, you can very well guess what this smartphone wants to become.

A deformable smartphone or tablet has long been a dream and it has benefits beyond simply being a fancy and eccentric piece of electronics. A bendable smartphone would be less prone to break or crack, for example. A tablet that can be folded can also, perhaps, be repurposed as a phone in some forms. Kyocera, who reminded the world that it also has a stake in smartphone displays with the announcement of the Sapphire Shield, is showing the public its own vision for this type of device. Of course, we’re still far away from that ideal product, but Kyocera’s design brings in some new ideas that are admittedly quite interesting and practical as well.

The Kyocera Proteus is described to take three forms. The first is the most familiar one, a flat and solid smartphone to be held in your hand. The second form takes on a bracelet-like shape, turning the smartphone into a smartwatch. A very wide smartwatch. Remember those “wrist slap rulers”? Something like that, but hopefully without the slapping part. The underside of the Proteus is envisioned to have sensors that would match the capabilities of smartwatches today, like heart rate monitors. The third form is an extension of the second, what Kyocera dubs as “clip style”, meaning the Proteus can be wrapped around circular bars or rails, like a bicycle handle bar. The exact use case for this is perhaps, up to the user’s imagination. 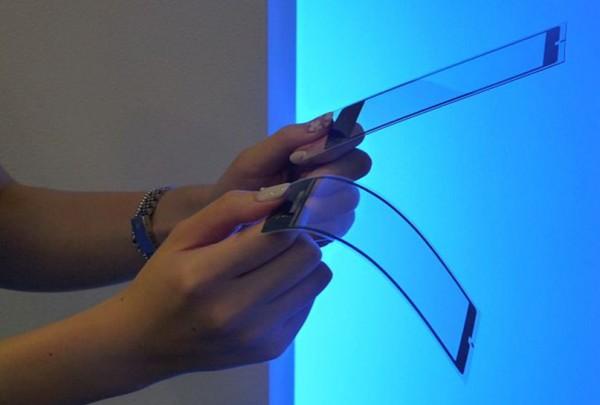 Of course, at this stage even the Kyocera Proteus isn’t a finished product, and the company admits that there are still a few hurdles to be passed before it reaches that, a list that should be familiar to anyone following developments in this technology. The first is the display, because flexible smartphones of course need flexible displays. That said, this might actually be the easiest one to solve, and some already even have answers. Batteries are a bit trickier to fix, as it requires a delicate balancing act between power and shape. Aside from flexible batteries, other options included segmented batteries or piezoelectric generators that use kinetic energy to power the device. Kyocera also seems to be interested in tactile haptic feedback, in particular, keypads with shape memory that flatten out when not in use.

Some of these problems already have solutions in one form or another, but nothing yet that can be combined into a single consumer product. It will probably take a while before something like the Kyocera Proteus becomes more than just a pipe dream, but it is still a dream worth holding on to.