The Kodak Pixpro SP360 Action Camera works with the ability to capture photos and video with a spherical lens. The data you capture with this lens can be viewed in a number of ways, the most interesting of these being an immersive virtual reality environment, with half of an orb available to you to capture the world around you. Just like this device’s most well-known competitor, the GoPro camera, the Kodak Pixpro SP360 is also prepared to go hardcore with a variety of caps, covers, and cases.

The Kodak Pixpro SP360 is a leader in the move to immersive camera equipment. It’s not the best all-’round camera on the market, and it’s not the first camera to have a spherical lens, but it is a really well put together piece of machinery, as well as a sign of great things to come from Kodak Pixpro. 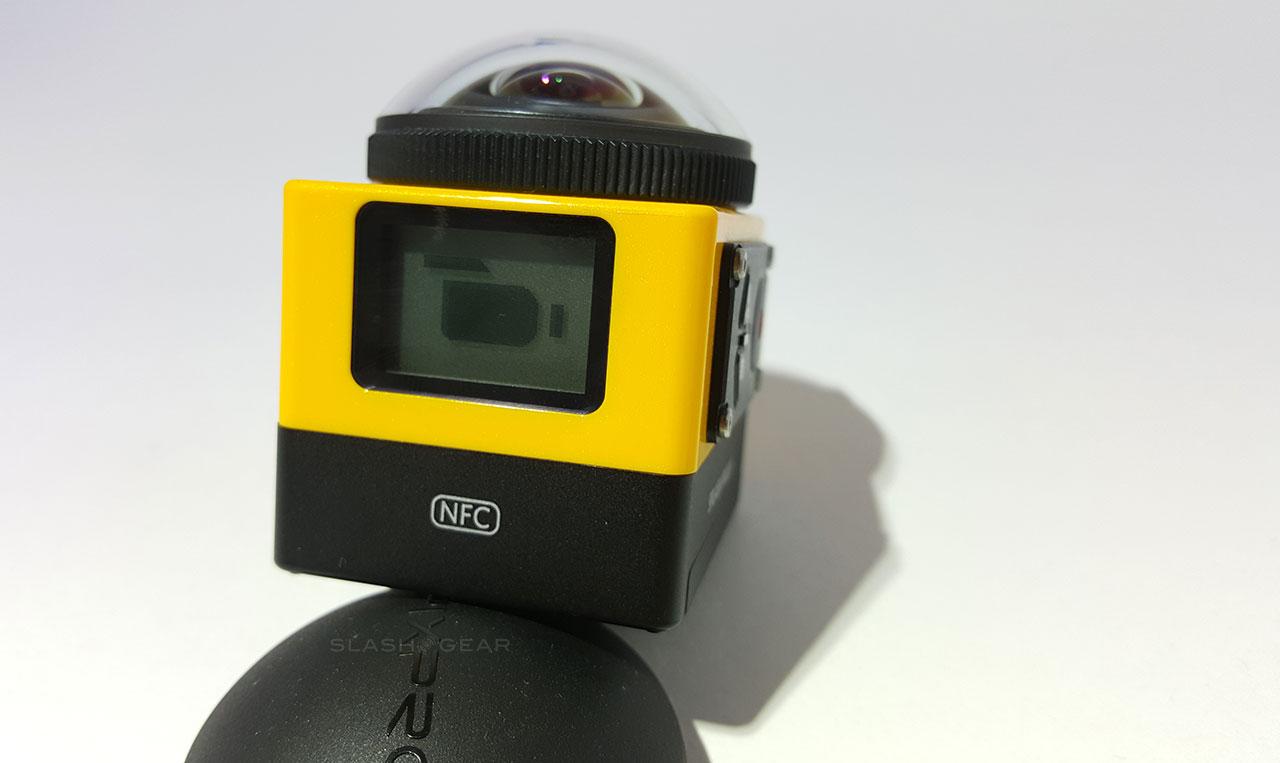 What’s really great about this camera is not its perfection of the art, but its straight up DECENT photos and its development crew’s willingness to keep up with the times.

Case in point: YouTube 360-view video. Just a few weeks after Google announced this new formatting for videos, the crew at Pixpro released a (beta) addition to their desktop software that allowed the user to output 360-formatted videos ready to roll with YouTube’s new system.

As far as we’re aware, they were the FIRST group to do this – to integrate YouTube’s formatting directly in to their software instead of relying on YouTube’s separate formatting software to do it for them.

The first video you see here is an example of what a video from the SP360 looked like with “Global” extraction and YouTube’s 360-formatting tool.*

*It looks strange because it’s pulling the equivalent of half a sphere around the entire spherical view – stretched! NOTE here that the Pixpro development team have been quick to work with YouTube’s formatting system to integrate it in with their own software.

The next video shows some auto-formatting by the Pixpro SP360’s desktop software made to work with YouTube’s new 360-degree vision.

This video is basically the same as the one you’re going to see below, but this time you’re getting the intended effect.

Incidentally, this can also make you feel rather small. The strange effect you’re feeling may be that you’re seeing from the eyes of a very small creature standing on top of a box at a crowded tech event.

Below you’re seeing GDC 2015 once again. This video was captured with the camera sitting flat, pointed upward. Again, this video was uploaded “flat”, as it were, so there’s not a lot different here other than a fish-eye sort of view.

Both videos above and below were uploaded to YouTube flat. This was without YouTube’s special 360-degree formatting.

Above you’ll see me hand-holding the camera, pointing it forward and straight on, walking through crowds without the aid of a separate viewing screen to see what I’m capturing.

Notice also here that you’re really getting a view from a bit lower in the camera than you might otherwise be used to. The lens spreads your view around in a half-sphere, but you can see that the edges don’t create a perfect circle.

The following is a variety of ways you’re able to extract an image from a photo taken with the SP360 using the device’s desktop software. 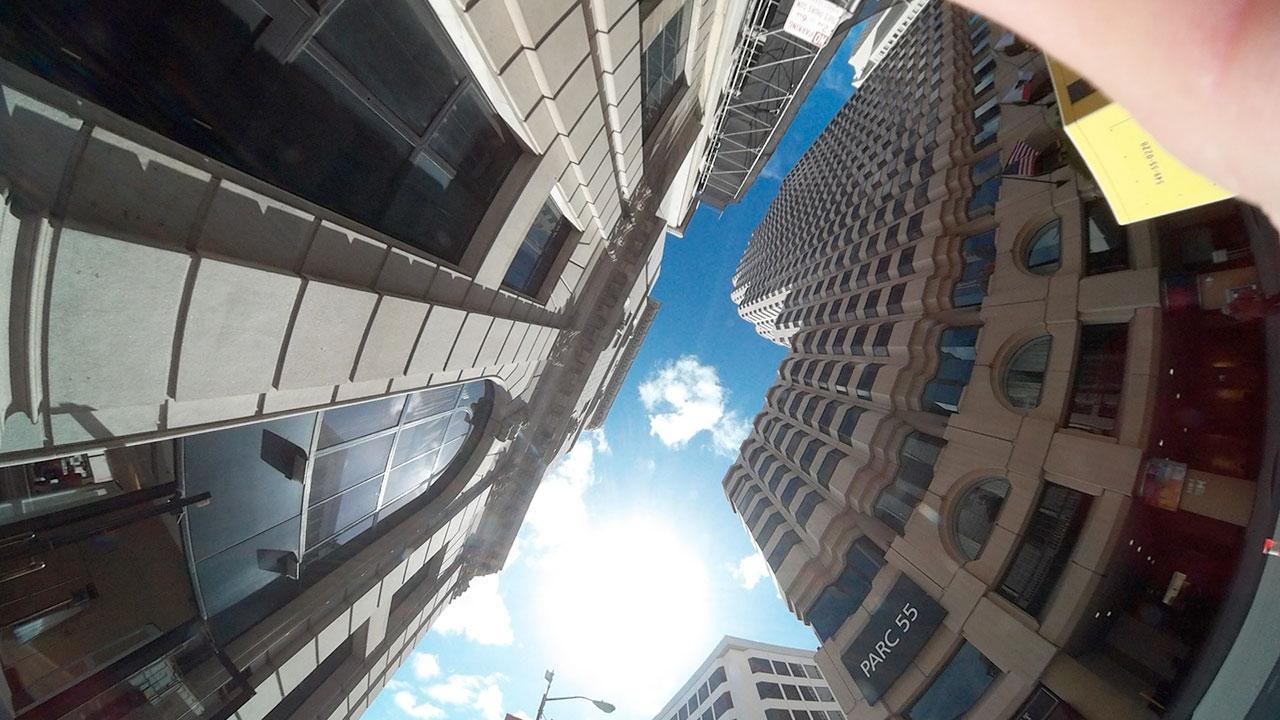 Above you’ll find 16:9 Front, while below you’ll find 4:3 Front. Some of these formats, you’ll find, produce very similar results. 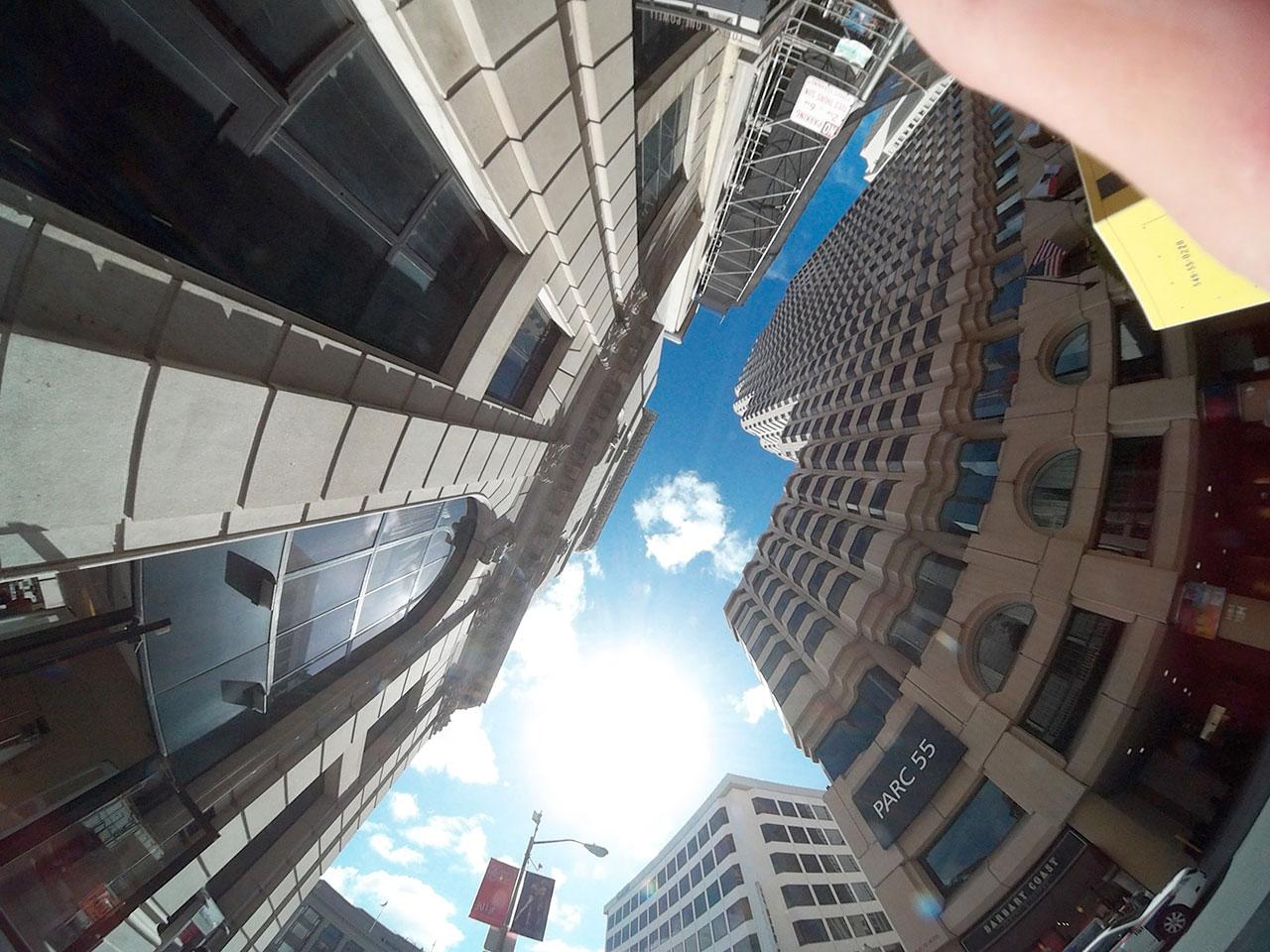 Next is a method for extraction just called “Extraction” by the software. It creates a bit of a bubble, as the original image was captured, inside a rectangular container. 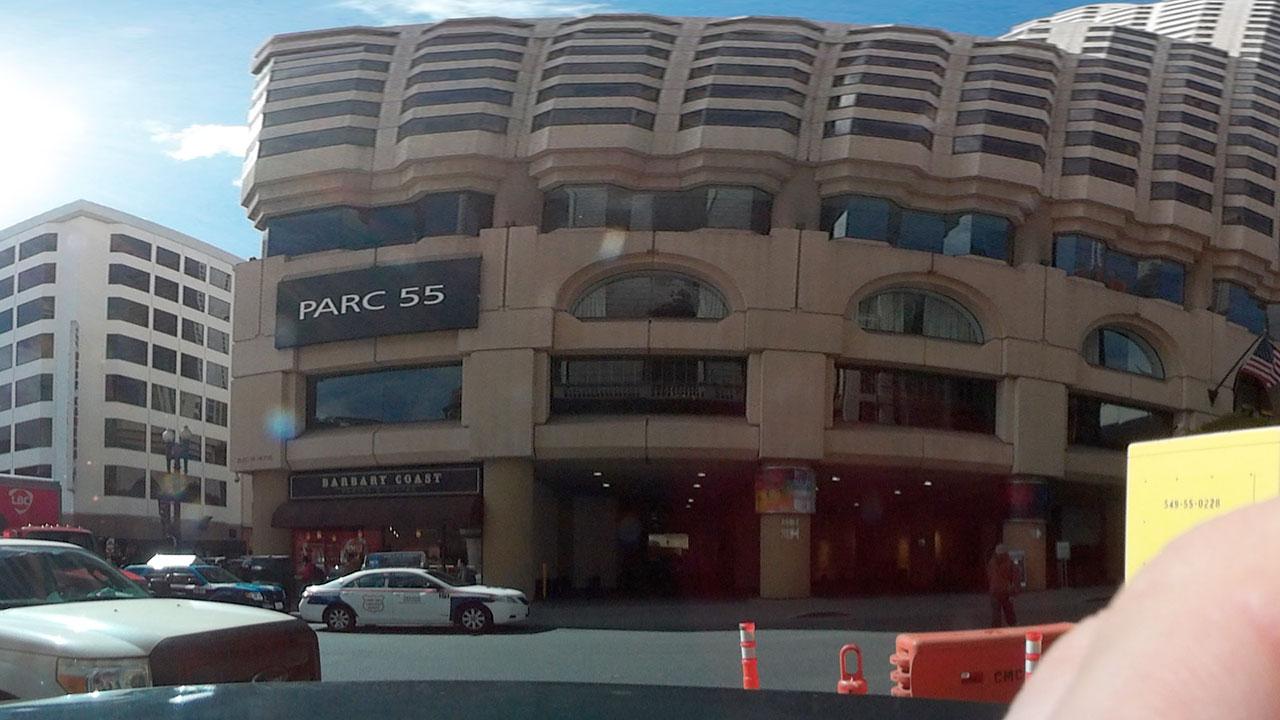 The orb you’ll see below is transferred from the camera with a method called “Global”.

This is as close to the actual original captured view as you’re going to get – circular capture, circular output. 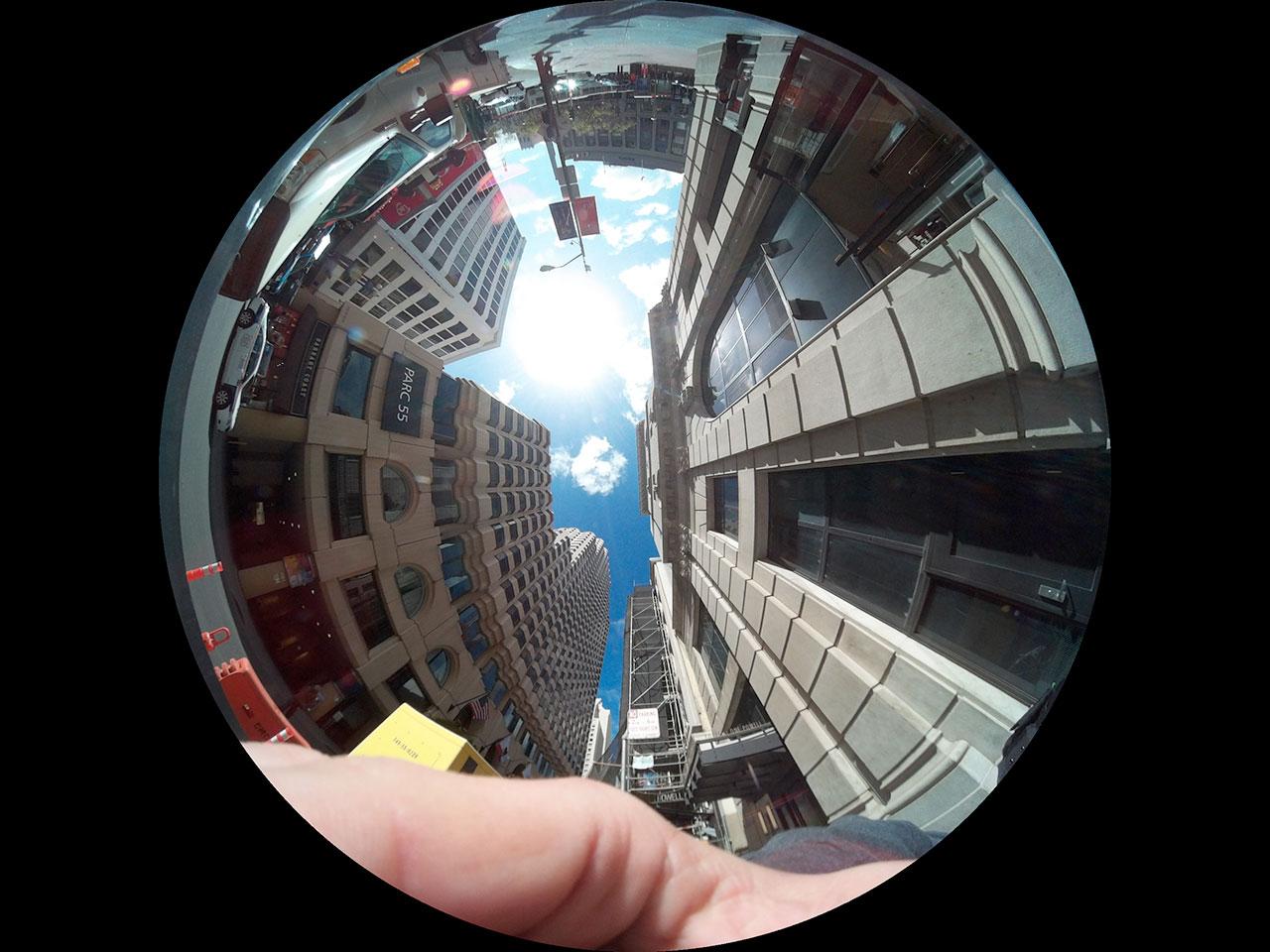 “Magic Flat” is the next method for capture. This method would produce MUCH better results if the camera sensor were up to the task. Unfortunately, until generation 2, we’re working with a camera setup that’s a bit more basic than, say, your average high-end smartphone. 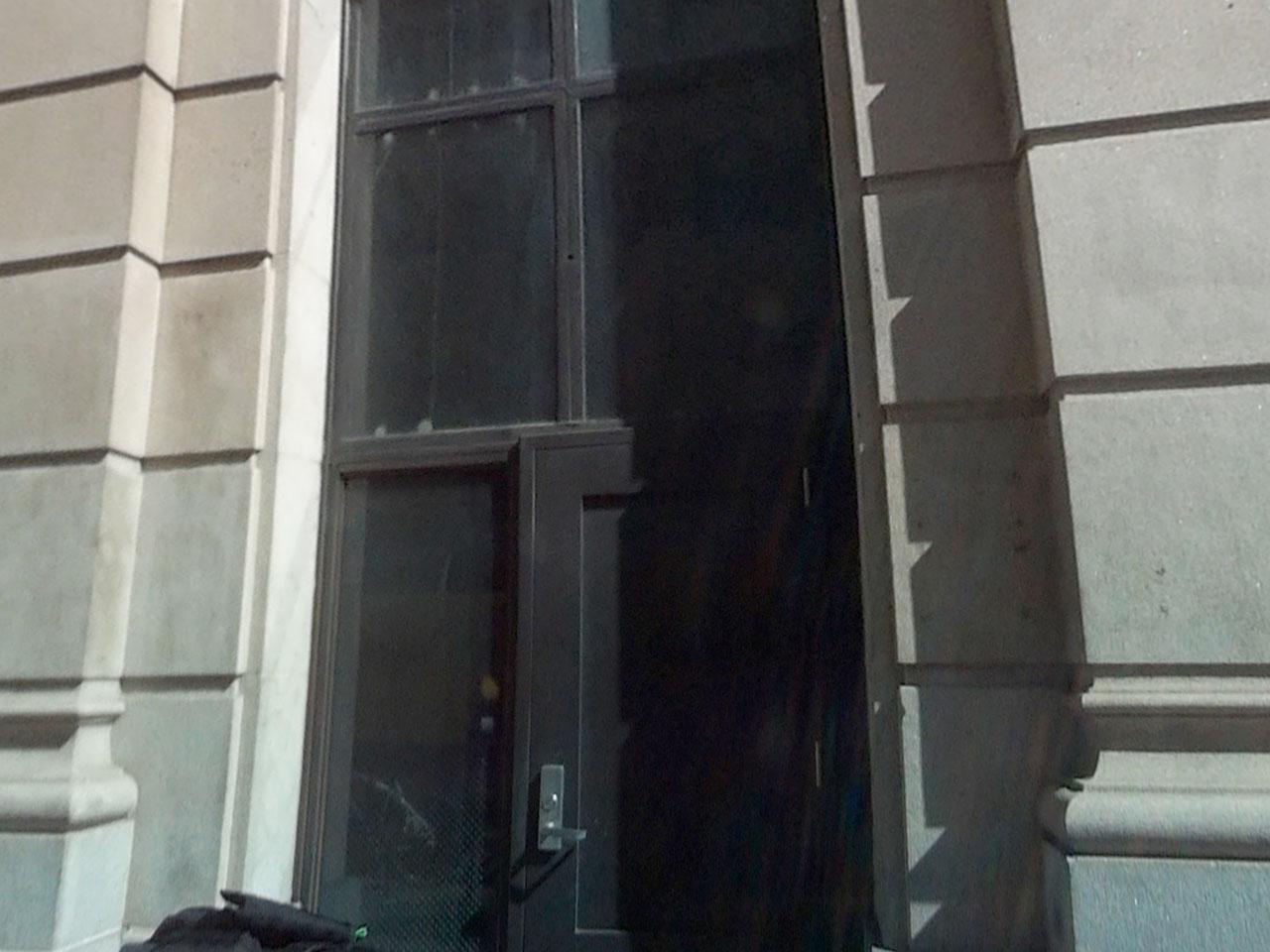 The “quad” method lets you capture four segments of the sphere at once, creating a lovely little grid of images while you’re at it. 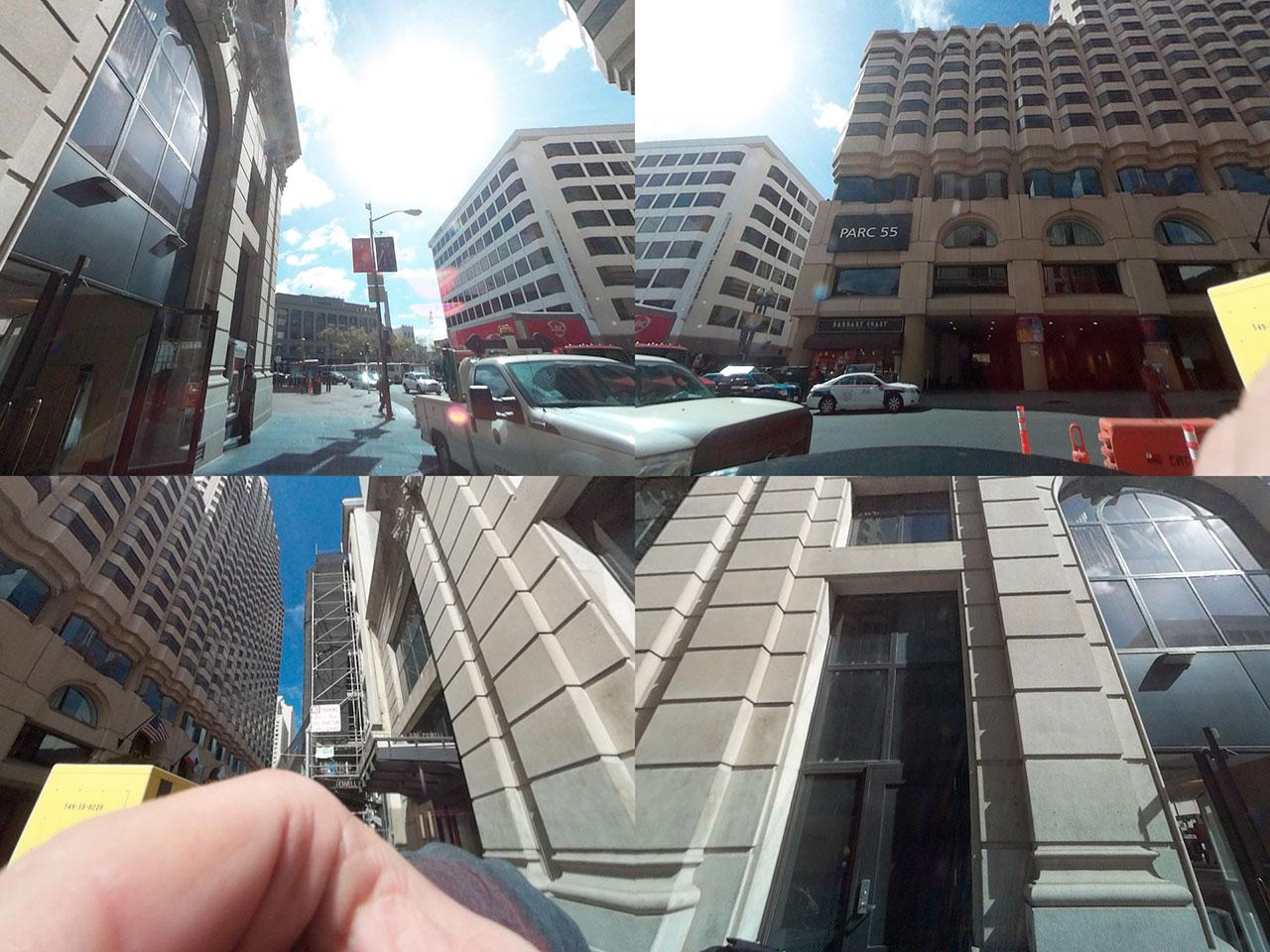 The segmented view allows you to capture the two halves of a tube sort of a view. This is similar to the panorama view, but here you get a slightly more standard height and width for your Facebooking pleasure. 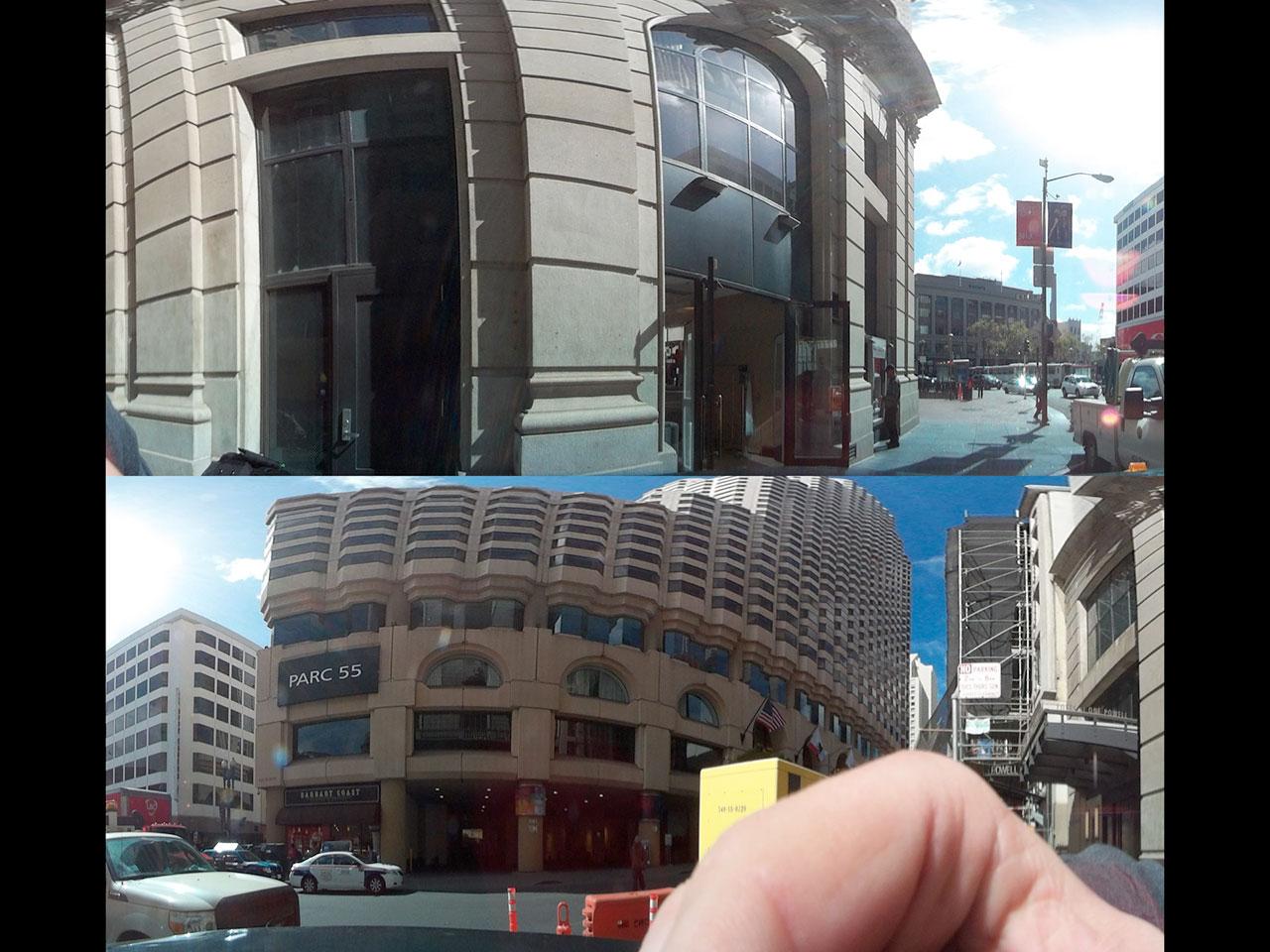 “Throw Out” is a method that’s very similar to the segmented capture you see above. Two different methods, very, very similar output. 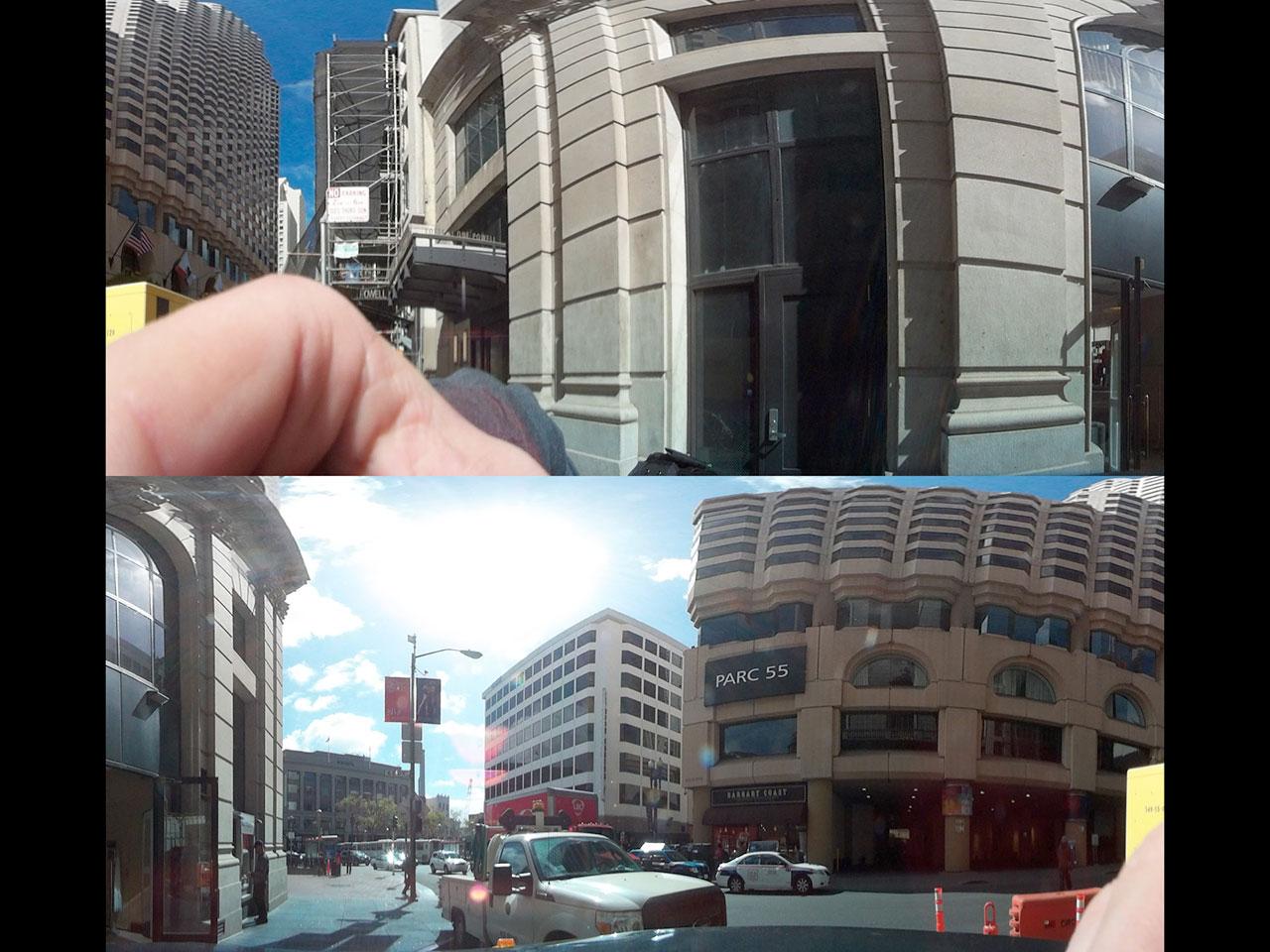 The next image is long – it’s a “Panorama” output, one that’ll look a lot better if you click and view at full size. 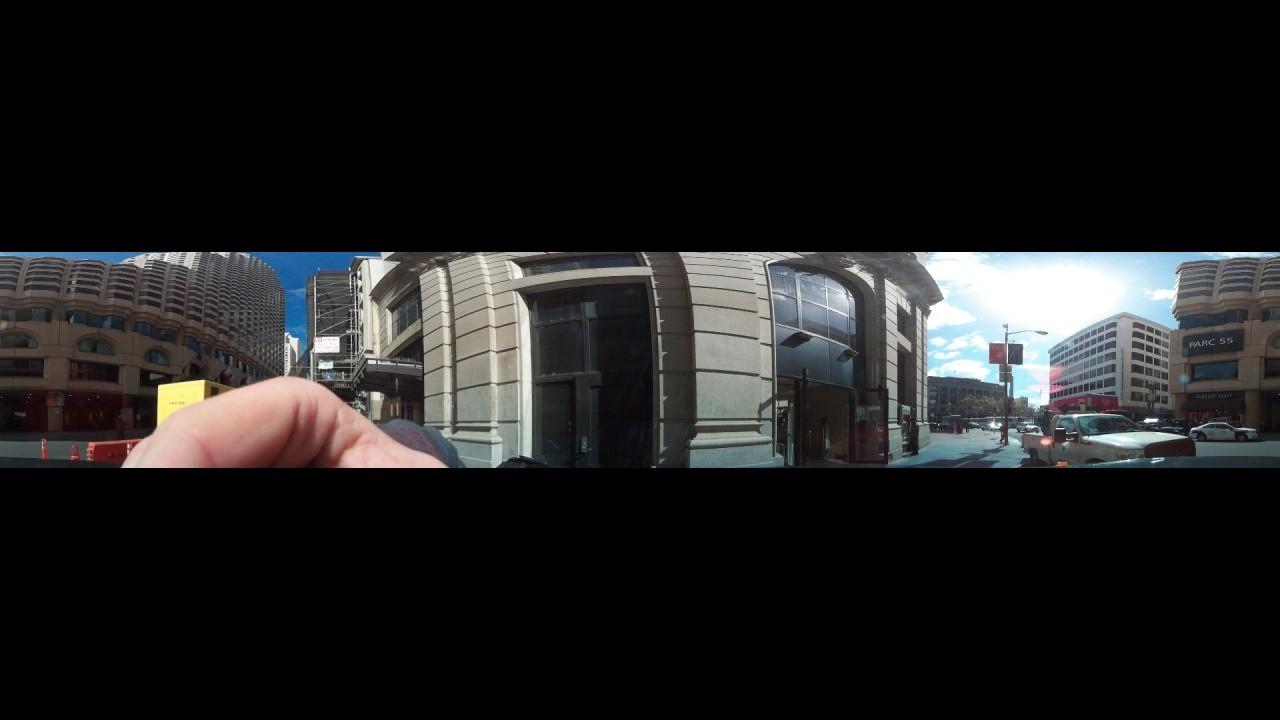 The next two methods for processing the image you’ve captured with the SP360 are strange. They’re really, super strange.

So strange I can’t imagine what you could possibly want to do with them. But there they are – like glorious “what if” situations only an artist could love. 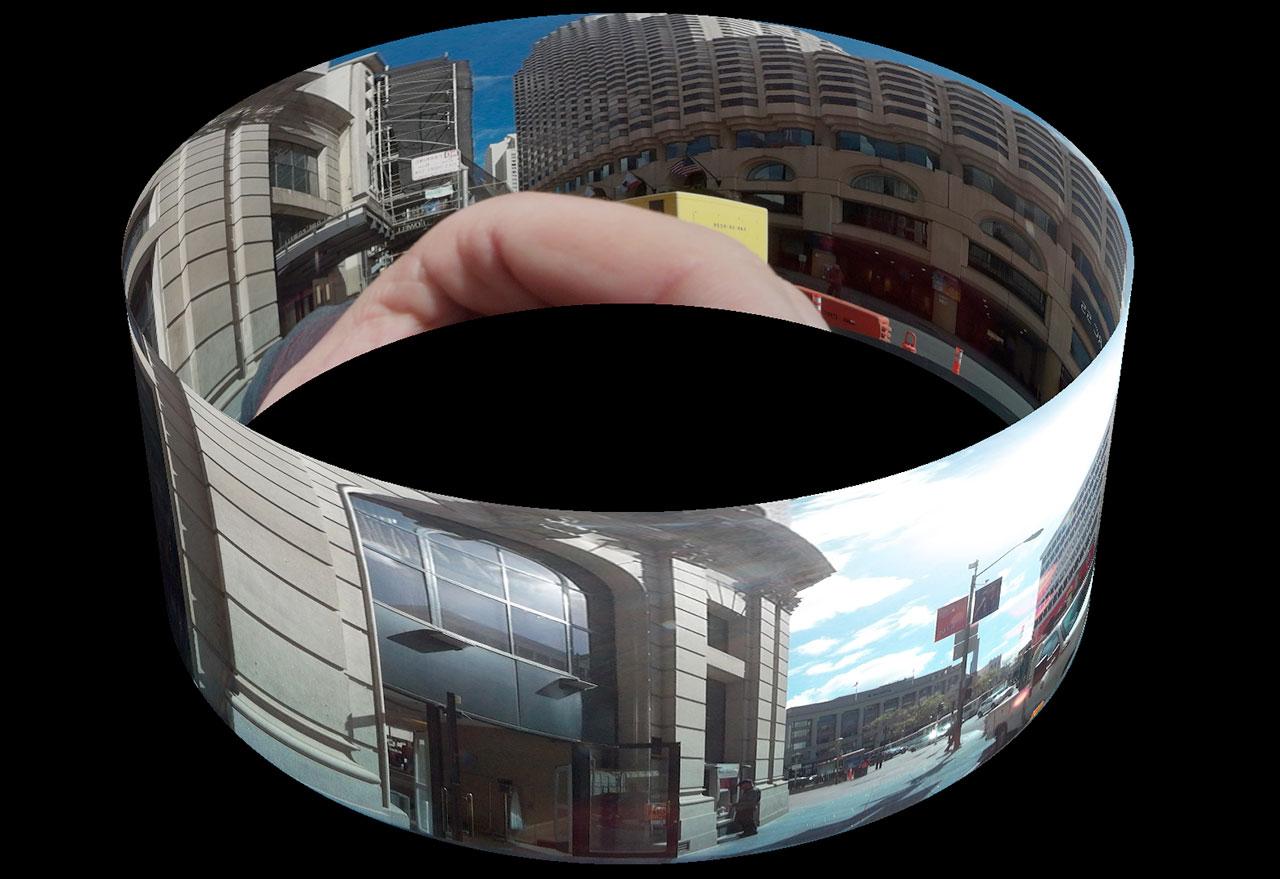 Above you’ll find “Ring”, and below you’ll find “Dome.” What a couple of strange ducks. Strange bits of output, to be sure. 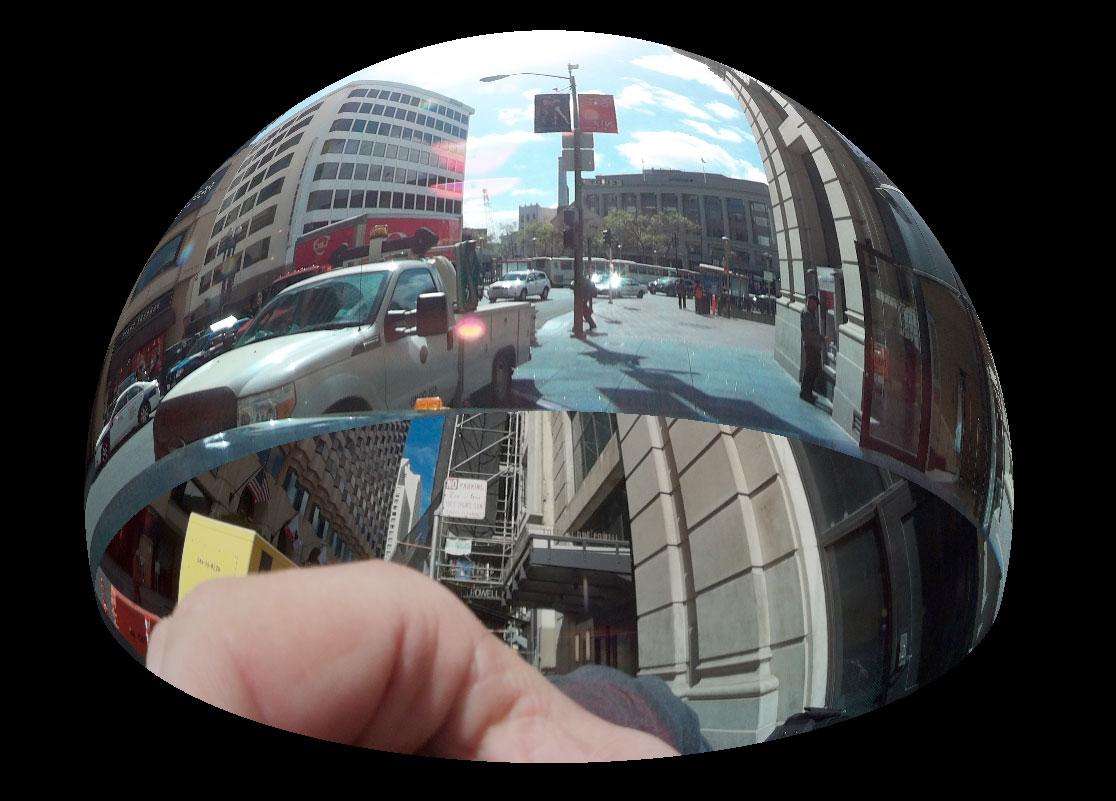 The images above are in place to give you an idea of the formatting offered with Kodak Pixpro’s desktop software tools. You can choose to import and edit however you like, of course.

One thing you’re going to have to get used to when you have a camera like this is the much, much wider field of view. While a standard camera allows you to be to the side, taking a photo from a 90-degree angle, this camera will unforgivingly include you in said photo.

Have a peek here at a few extreme selfies. 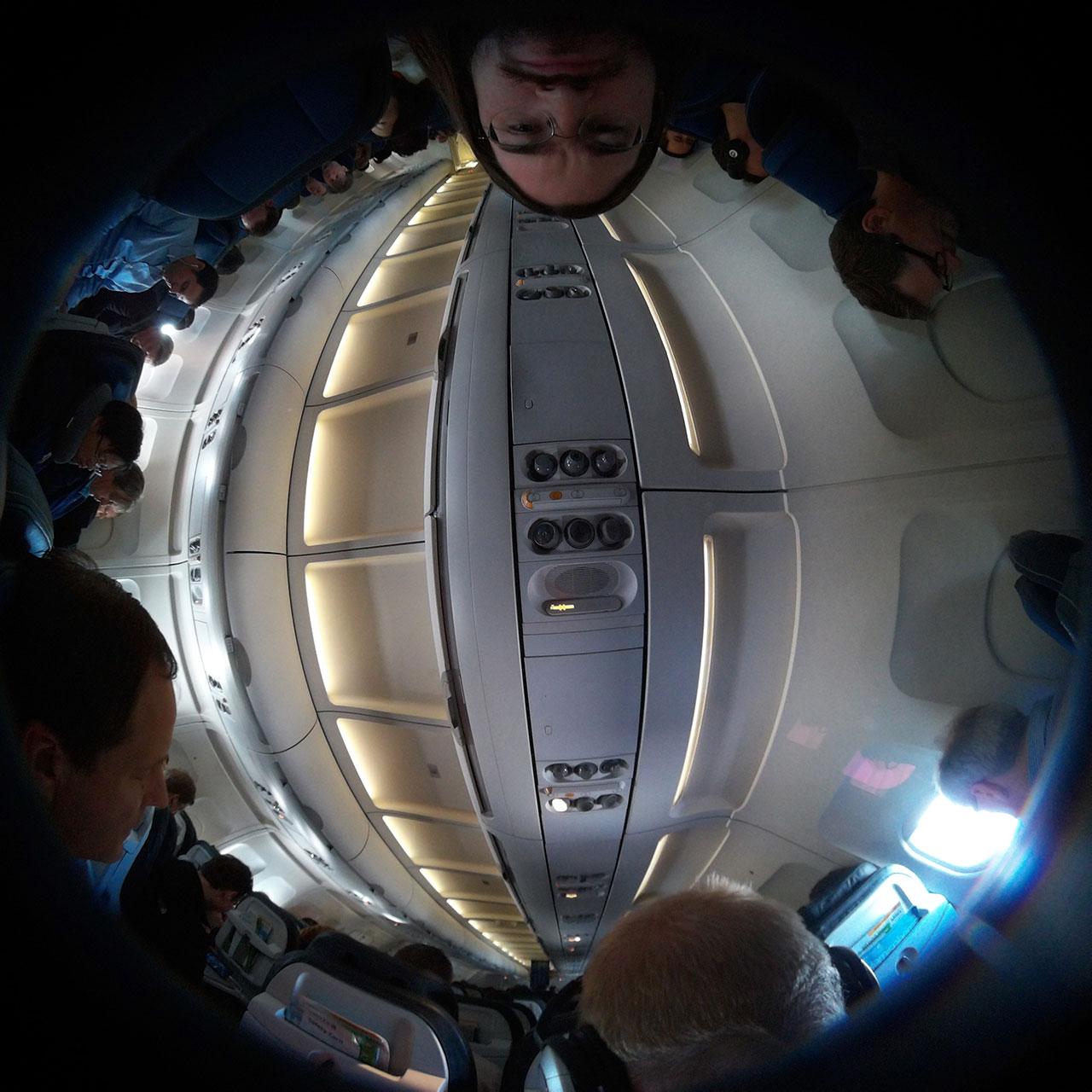 You can take one on a plane. 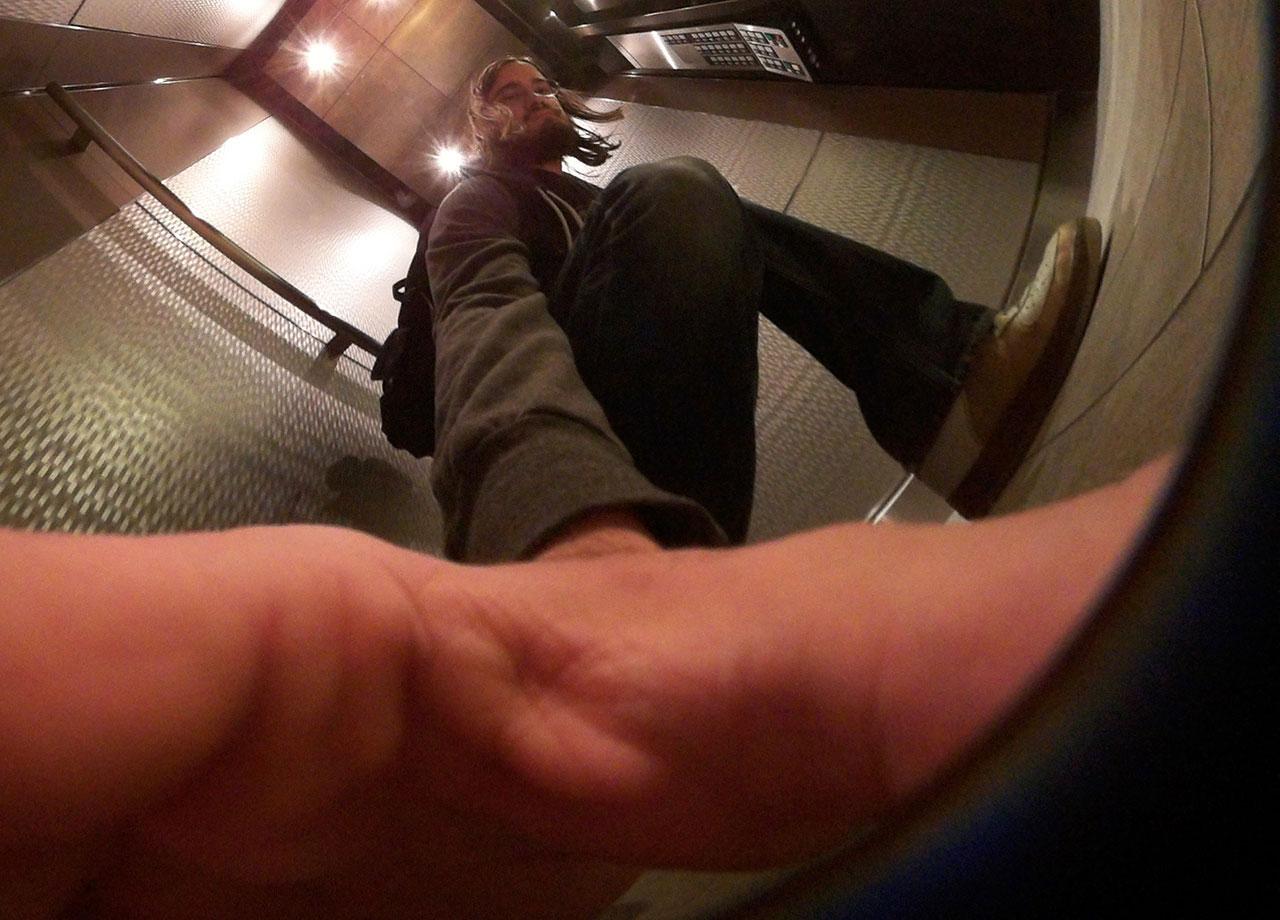 Or on your way up on the elevator. 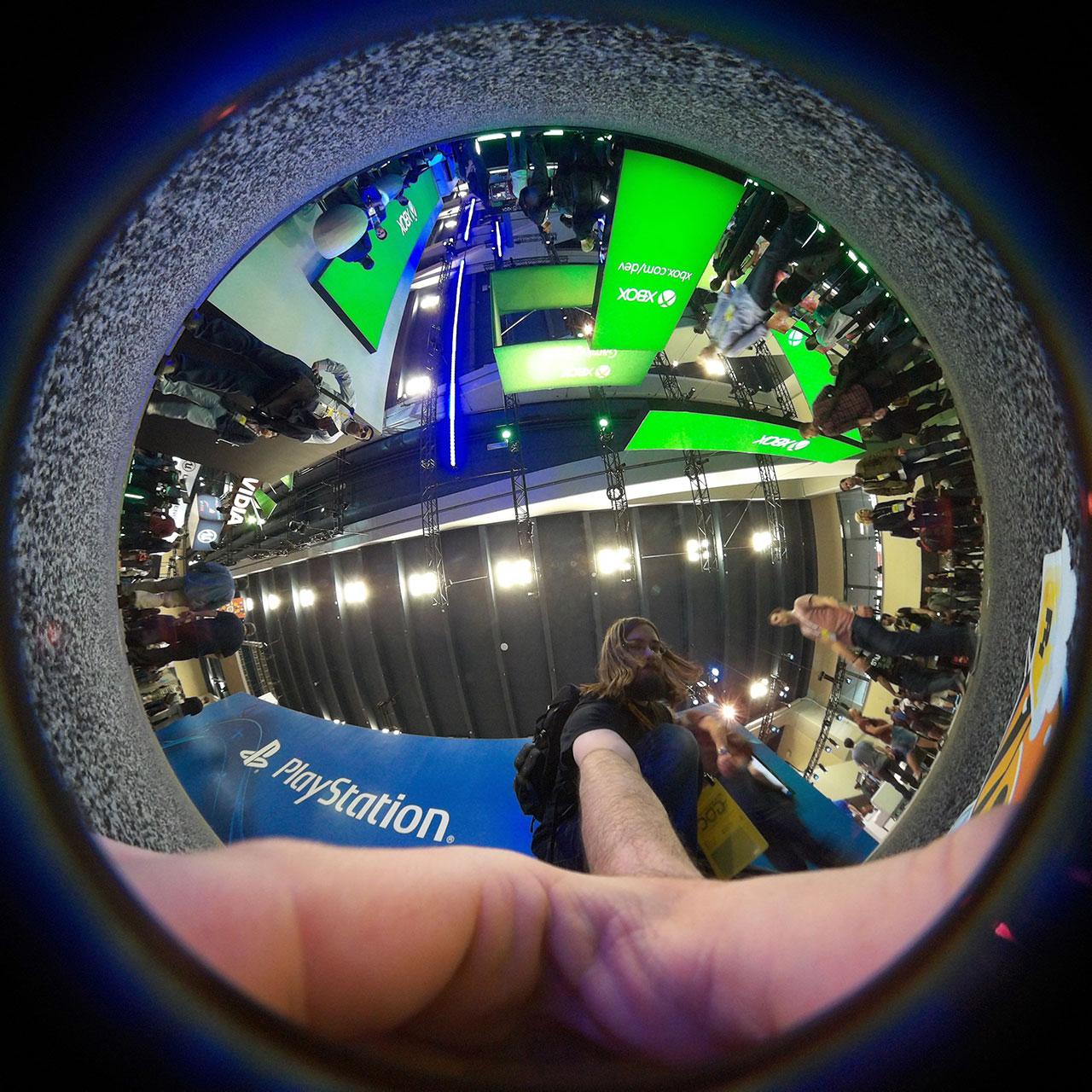 Or at your favorite gaming convention. 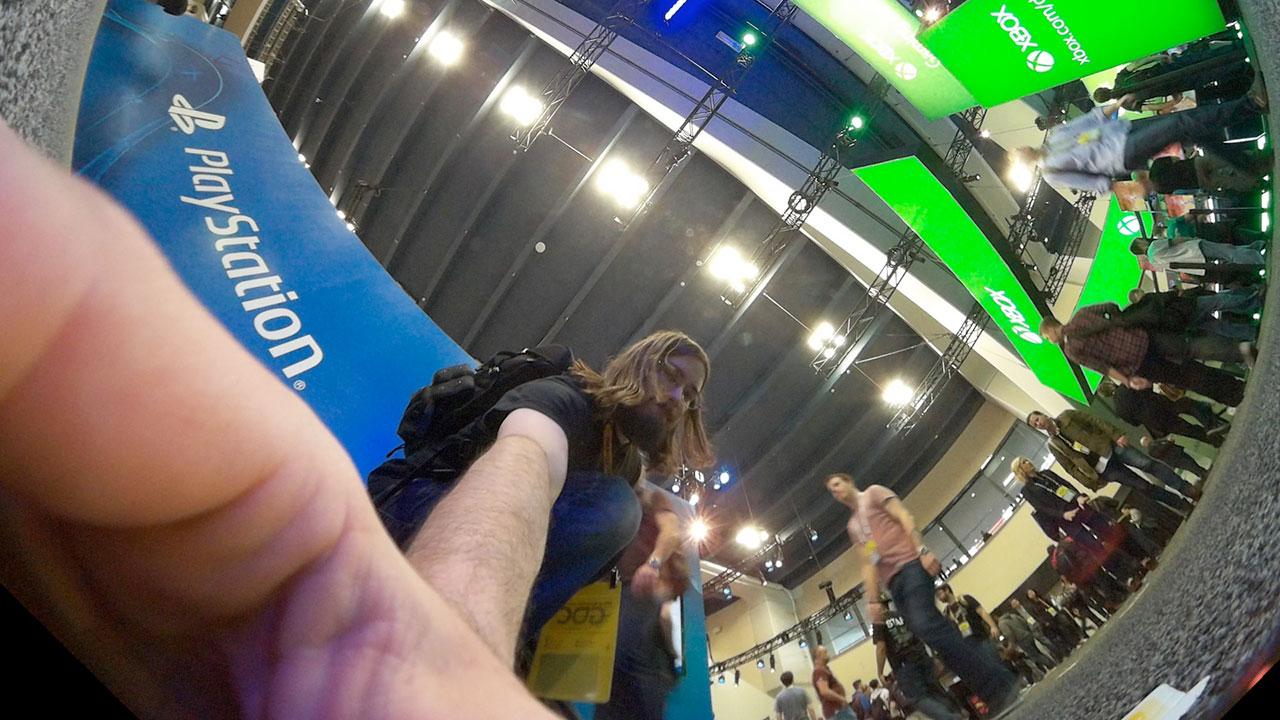 In more than one format!

You can also get up relatively close and personal with objects with this camera as well. While photos of this ladybug any closer than this image didn’t turn out, close enough works out pretty well. 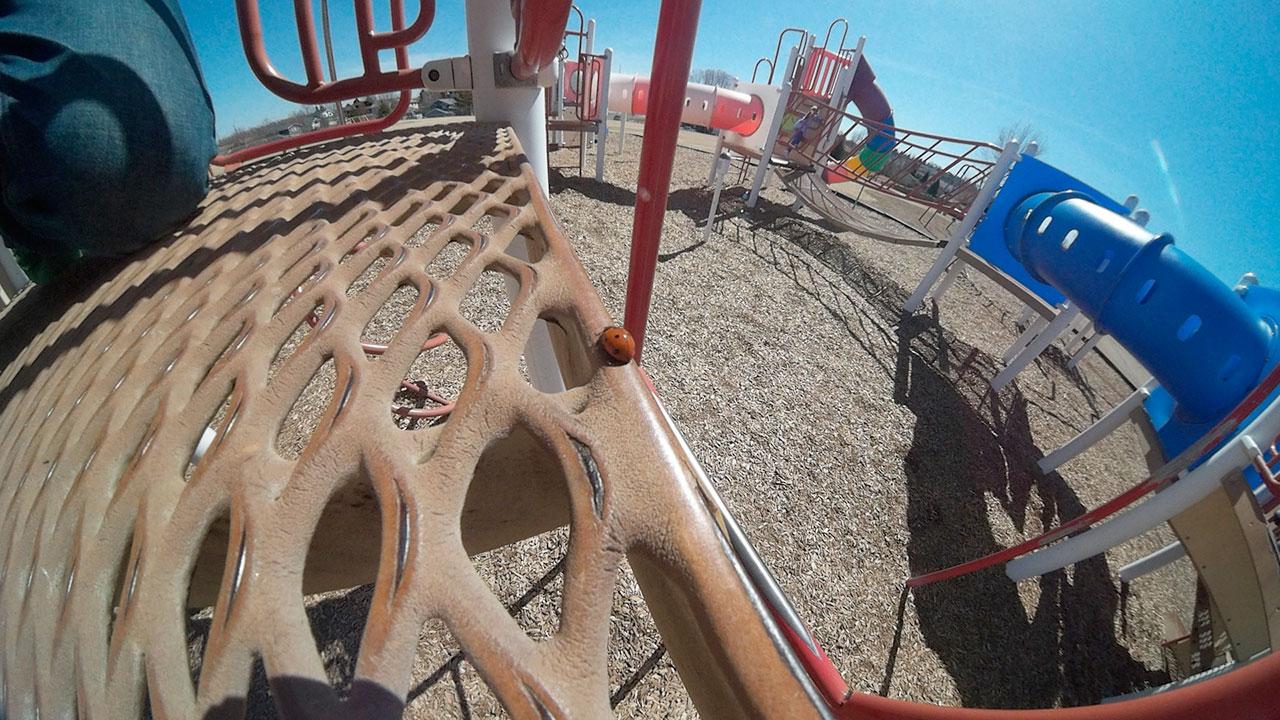 Don’t expect to use this camera to collect any award-winning National Geographic shots right off the bat. Instead, you’ll need to experiment with the new format and take lots and lots of shots. 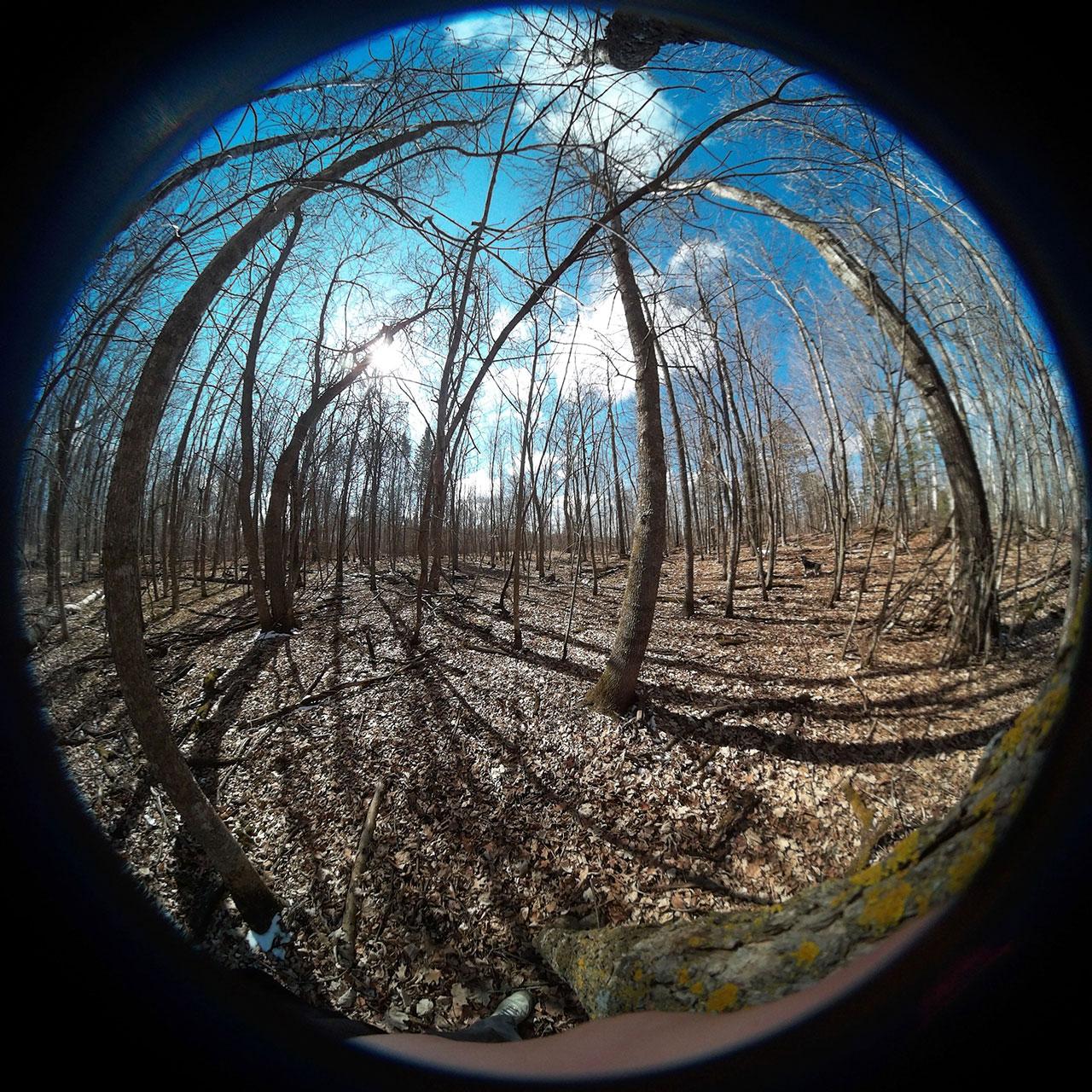 And don’t be surprised if once you start down this path, you begin to become attracted to circular subject matter. 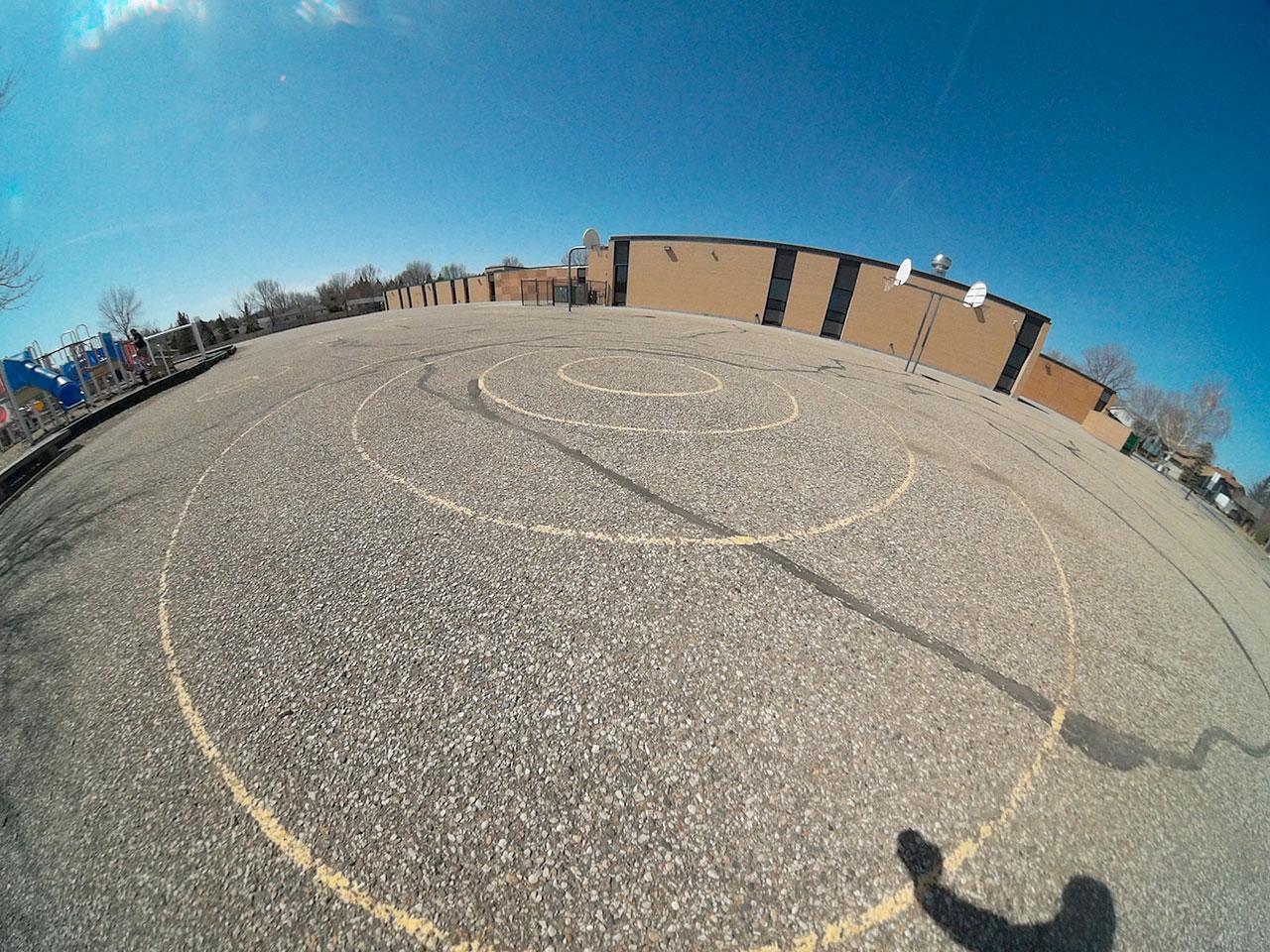 You can connect to this device with a micro-USB cord (recommended) to move data from it to your desktop computer. You can also use the microSD card slot to store, then move data, if you like. You’ll want to pick your own microSD card up one way or the other – you’re going to be capturing some big files. 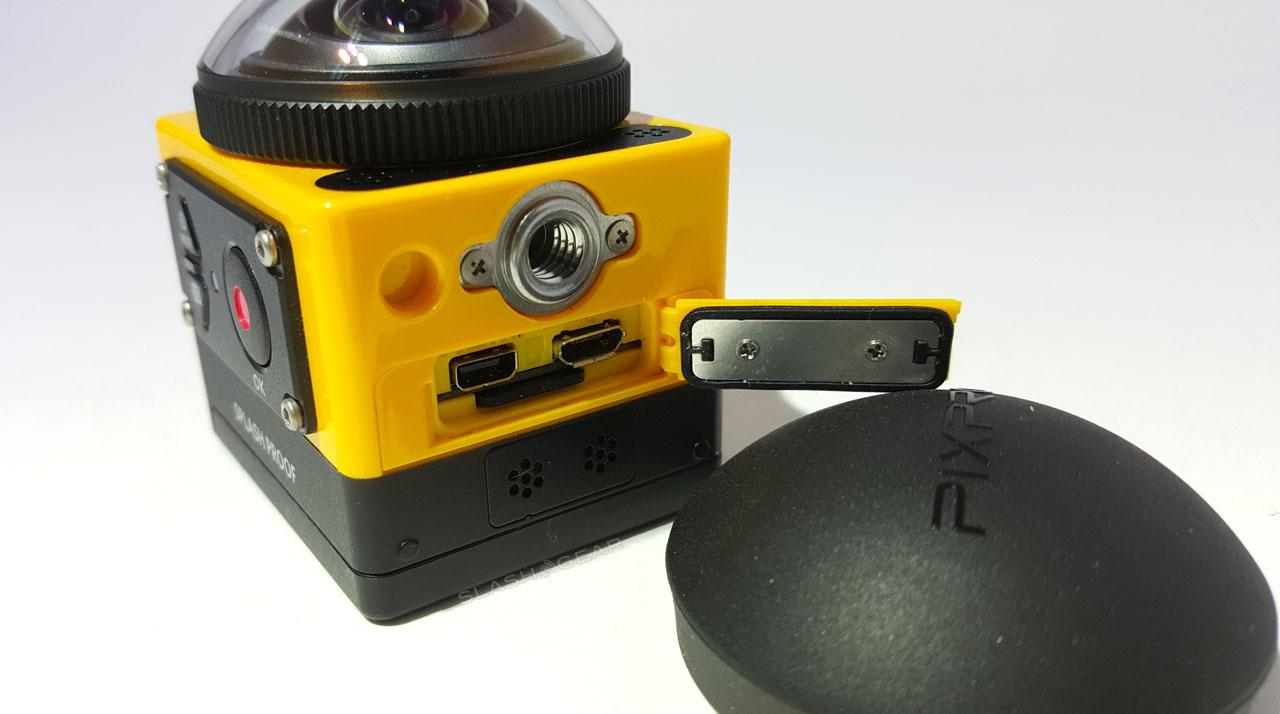 There’s also a micro-HDMI port for viewing media straight from the machine. These ports and the microSD card slot are hidden under a water-tight door on the side of the machine.

The Kodak PIXPRO SP360 dome action camera can be used with an iPhone, iPad, or Android device as Bluetooth-connected remote viewscreen and controller. You can also use the buttons on the side of the device to control captures. 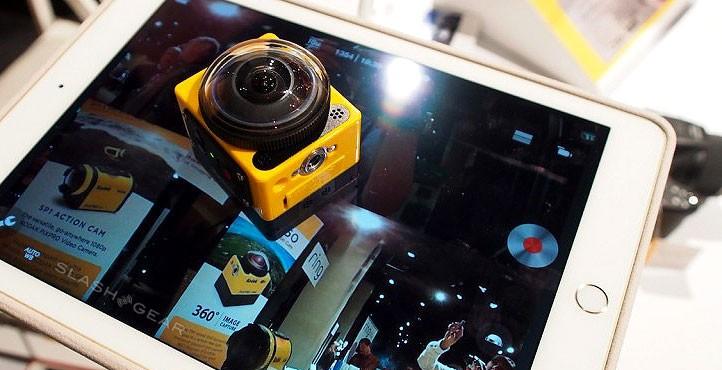 Either way, this machine creates an awesome new experience for photographers and videographers. Even as a first-wave device, this camera presents a professional combination of great hardware and top-notch software support. 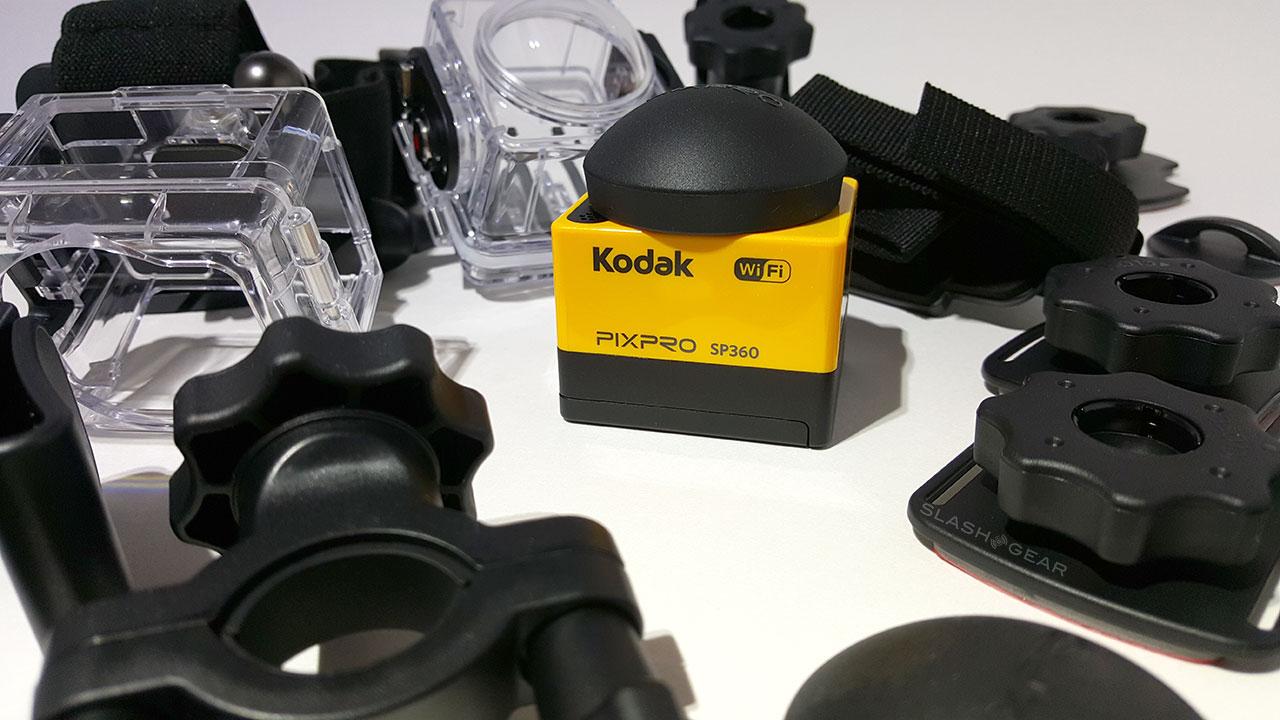 This camera starts at $349 USD and the Kodak Pixpro crew have created a wide variety of accessories that are able to create a full-on hardcore experience for you right out the gate.

Unlike some similar action camera crews that set up shop and shut down in less than a year, we’re expecting this Kodak Pixpro team to remain true to its customers well through the future with software and hardware support.