Kindle, DRM & the case for an ebook Marketplace

Shortly before Christmas, Freescale sent me an Amazon Kindle to take a look at. On the surface, I should be the perfect audience for ebooks. I’ve never really invested in all that much digital music – I don’t own an iPod or another manufacturers’ PMP and I’ve only ever bought a few tracks online (and never with DRM) – instead using Spotify, the streaming music service, initially free and subsequently as a premium subscriber (which kills the ads and gives better quality audio), but I do love reading. I’d much rather read a book when travelling than listen to music, and it’s books that distract me from tech before I go to sleep each night. I’m also pretty obsessive about keeping my books in pristine condition: I’m one of those bizarre people who don’t like to crack the spine, and as such end up peering into a carefully spread gap.

So, voracious reader and obsessive-compulsive about book damage: ebooks, with instant Kindle download and no pesky spine to worry about, should be the ideal solution, right? As you probably guessed was coming, things haven’t quite worked out that way.

Part of the problem is the limitation of one ebook vendor. If I’m going to give in to an urge for trashy fiction then yes, a penny copy of a used (and often battered) Amazon Marketplace novel sates that need; however Marketplace is also good for finding brand-new (or as-new) titles retailing for half the cover price. Right now, though, there’s no easy way for me to buy the ebooks that someone else has finished with, there’s no Buy It Used option underneath the official Amazon offering. Similarly, I can’t decide to take a chance on a new author (and no, samples aren’t quite the same thing) with the reassurance – like I’d have from a physical book – that I could always resell it afterwards (and, thanks to my obsessive reading methods, legitimately advertise it as-new to boot).

As has been argued with music and video content, once you go digital there are copyright issues that didn’t exist so readily in the physical domain. It’s an even bigger gulf between books and ebooks: if you wanted to sneakily digitize your physical copy, you basically had to strip the binding and scan every page – then run OCR if you want search functionality. Yes, some students did it with their textbooks (more, it seems, to avoid having to carry the heavy original than for illicit sharing), but on balance it wasn’t really worth the effort for most fiction. Amazon – and others – are having to half hand-hold, half berate publishers who (as shown by last year’s news that some big names would be purposefully delaying ebook releases in an attempt to preserve hardback sales) don’t know whether to embrace or kick against the new technology. To do so they’re generally resorting to DRM which limits the number of ereaders content can be simultaneously read on, and the number of “owners” who can access it.

Ironically, that DRM would probably make it easier for Amazon to set up a used ebook Marketplace; after all, they control what devices you can read your purchased content on, how many times you can authorize it (if, say, you buy a second Kindle, or decide to use the desktop or iPhone Kindle apps) and even, as we saw in 2009 when digital copies of 1984 were remotely deleted, whether customers can have it on their ereader at all. It might take a little work to automate the DRM management – right now readers are directed to contact customer services if they run out of ebook authorization “attempts”, which presumably means it’s done on a manual, case-by-case basis – but with no more obvious overheads than their current third-party Marketplace (and Amazon taking a cut from every sale, naturally) it’s hard to see it as anything other than a win. And, since it’s so much easier for Amazon to keep track of what titles are selling and that they’re authentic copies – they’re most likely shuttling through Whispernet – maybe they could sweeten the deal with the anxious publishers by promising them a slice of the pie too, something right now they don’t get from physical second-hand book sales. 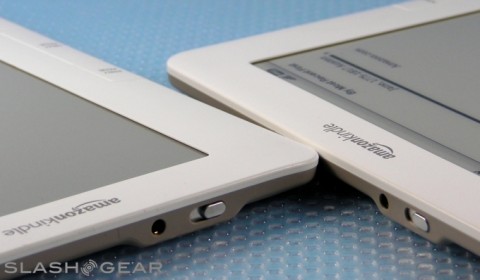 In fact, “second hand” ebooks make far more sense than the used music market ever did, since readers are more likely to want a novel once then have no more pressing use for it, while music content is more likely to be returned to time after time. If we have to have DRM – and there are high-profile authors like Cory Doctorow who insist we don’t – then let’s have the obvious upside for the consumer, too: I’ll feel happier about rights-management if it means fewer pirated copies of titles that might push down the second-hand value of ebooks I’ve bought. As far as I can see, that’s DRM working in my favor as well as that of the original rights-holders.

CES 2010 saw ereaders – along with tablets, which are likely to boast similar ebook handling – proliferate, and there’s plenty more hardware and software advances to come in the next twelve months. Pixel Qi and Qualcomm’s mirasol displays are just two of the low-power, video capable options hoping to grab some of E Ink’s e-paper market, with each firm promising shipping products sometime this year. There’s talk that Amazon are already eying mirasol for the next-gen Kindle, while tablets and netbooks with Pixel Qi screens would – with heavy use of the monochromatic mode – be able to further close the battery gap between the longevity of a dedicated ereader and what current-gen netbooks can manage.

In contrast with the hardware horizon, then, the ebook software market looks surprisingly immature. That could be partly down to the main players trying, for the most part, to use the buy-it-keep-it music DRM model for a segment it doesn’t quite match up to. Whatever the reason, it may take a shift in the attitude toward ownership rights – as distinct from copyright rights – before ebooks convince mainstream readers to put down their paperbacks.

While Freescale obviously sent me the Kindle to promote the fact that it’s their chipset inside (I only knew it was Amazon’s device when I opened the package – all they’d initially asked was whether they could send me an ereader from one of their hardware partners to look at), they didn’t ask me to review it, promote it or generally look upon Freescale (or Amazon) any more positively. Any ebooks I’ve bought have been at my own expense.