JVC’s Procision GC-PX100 camcorder got somewhat lost in the CES rush back in January, but the company hopes its slow-motion loving pro-shooter will get more attention now that it’s shipping. Packing a 12.8-megapixel sensor capable of 1080/60p video at 36Mbps, the GC-PX100 can capture Full HD footage at between 120fps and 600fps for silky-smooth slowed down sports or action shots, in addition to pulling nine frames of stills from video.

Up front is an f1.2 lens and a 10x optical zoom, while the 1/2.3-inch CMOS sensor has BSI and optical image stabilization. 60fps still burst shooting is possible, along with time-lapse photos, and the Procision camera can be set to flick between three zoom levels – full wide, full tele, and a user-assignable mid-point – for easier frame composition. 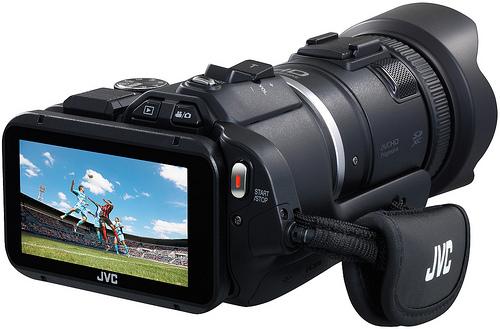 Inside, there’s WiFi for remotely reviewing or transferring content on a smartphone or tablet, and JVC has a sports-centric app – JVC CAM Coach – for iOS and Android which allows notations for form and other commentary. The 3-inch 460k pixel LCD can tilt for easier viewing, and JVC throws in a monitor hood; a color viewfinder is an option.

Storage is courtesy of an SDXC/SDHC/SD memory card, with the PX100 capable of storing over 10hrs of 1080/60p AVCHD footage on a 128GB card. Ports include mini HDMI out, AV/headphone out, USB 2.0, and a microphone input, and there’s an accessory shoe as well as a powered socket for the viewfinder. The GC-PX100 is available now, priced at $999.95.