Looking forward to the upcoming Jurassic Park 4 movie, aptly named Jurassic World? The folks at Entertainment Weekly have gotten ahold of the first pictures to surface from the set, and while no dinosaurs are present, we do get a glimpse of some dino-based damage.

Unfortunately, only three pictures have surfaced, and the most exciting of the bunch is the smashed up truck door seen above. You can check out the other two — a director’s chair on set and a camera/actor shot combo — in the gallery below.

Said Director Colin Trevorrow, “Yesterday I was under a construction crane with Chris Pratt, covered with dirt, eyeballing the exact height of the dinosaur trying to kill him. We both cracked up laughing. Sometimes you just have to stop and let the joy take over.”

While waiting for more images from the uber-secret set to surface, check out the concept art for an alleged past version of a script for the series’ fourth installment. Industrial Light and Magic denied the images, and the rumored storyline is beyond ridiculous, but the renders and artwork are fascinating nonetheless. 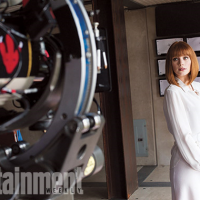 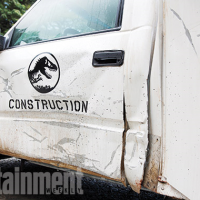 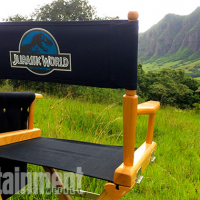