Fusion Garage’s Chandra Rathakrishnan did say he wanted to show off the new JooJoo webslate (formerly known as the CrunchPad and already mired in controversy) to as many people as possible in their webcast yesterday, and it seems CNET were first in the queue.  They’re impressed by the hardware, certainly – the 1,366 x 768 12.1-inch capacitive touchscreen is described as “gorgeous”, the form-factor “slim and pleasing to hold” – but they reckon the $499 price tag will end up strangling any chance of sales success. 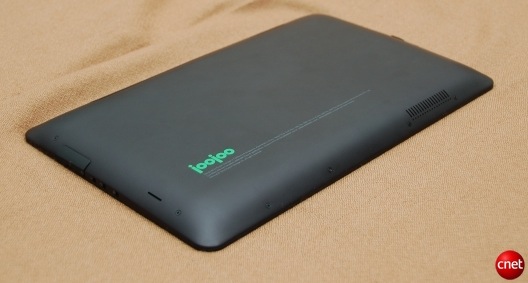 Since you boot straight into the browser, navigation pretty much consists of forward/backward movement, multitouch, bookmarks and simple text entry.  The JooJoo uses gestures – two-finger swipes for forward/backward, another like “turning down a page corner” for bookmarks – rather than on-screen buttons, but the on-screen QWERTY keyboard is apparently “positioned poorly”.  Still, you’ll be able to use a USB or Bluetooth keyboard with the slate.

The much-discussed 720p HD video support ended up a non-starter too, though CNET are blaming the limitations of the WiFi network they attempted it on for that rather than the hardware itself; Fusion Garage won’t reveal what CPU the JooJoo uses.  Since there’s only 4GB SSD of onboard memory, you’ll be limited to streaming content, so performance at that is pretty important.  In the end, CNET reckon the JooJoo is great “if you have money to burn”, but reckon most people will be better served by a similarly-priced (but far more powerful) laptop.