A new V8 Jeep Wrangler has been revealed, at least in concept form, teasing lashings of performance both on and off the road. The announcement of the new V8 Wrangler Concept comes – almost certainly intentionally – on the same day that the new Ford Bronco is due to be officially revealed, and may well persuade a few would-be Bronco buyers to keep their wallets in their pockets, at least for the moment.

It’s fair to say that, like the new Bronco, a Wrangler V8 is something off-roader fans have long been asking for. Currently, the 2020 Wrangler tops out at a 3.6-liter V6 gas engine which brings 285 horsepower to the party. Jeep enthusiasts, though, wanted more.

The result is the Jeep Wrangler Rubicon 392 Concept. As the name suggests, it brings 392 cubic inches of displacement to the party, courtesy of a 6.4-liter V8. It adds up to 450 horsepower and 450 lb-ft of torque. 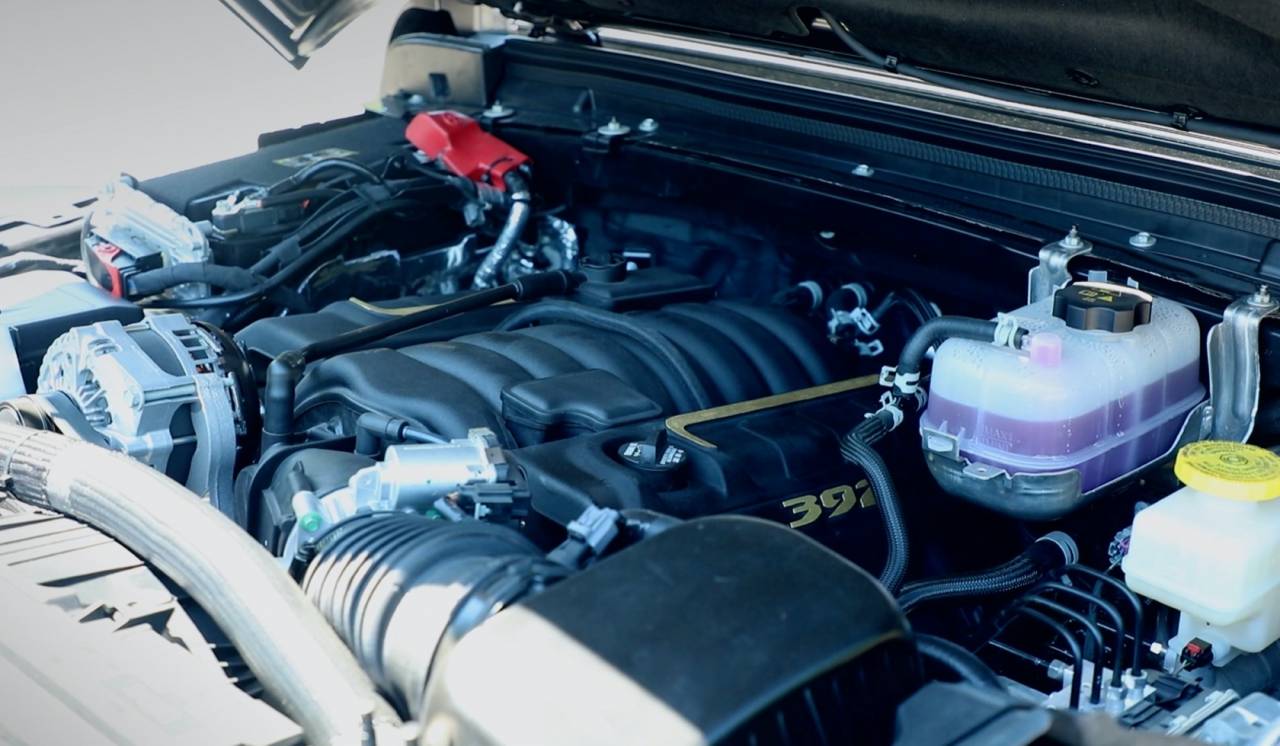 That’s sufficient, Jeep teases, for 0-60 mph in under five seconds. An eight-speed automatic transmission is standard, and as you’d expect there’s been no compromise on the off-roading hardware eight. Dana 44 axles, a full-time Selec-Track two-speed transfer case, and Tru-Lok electric front- and rear-axle lockers are all onboard. 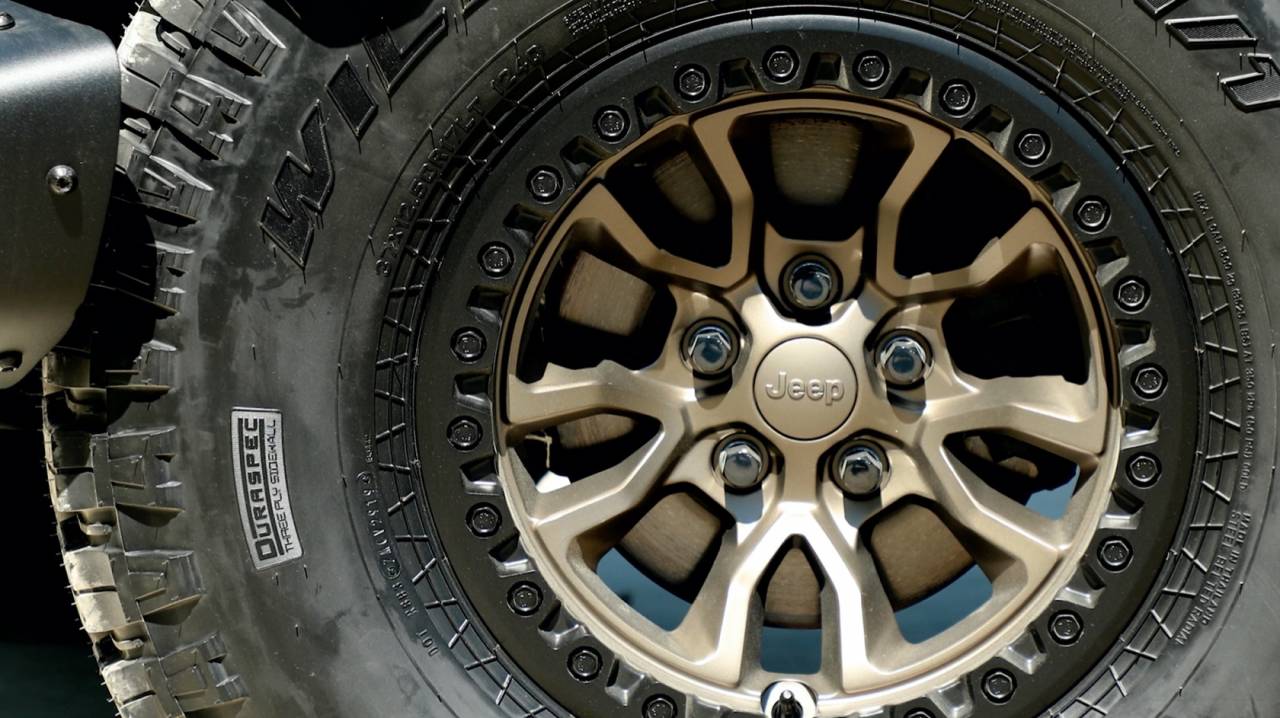 There are also 37-inch mud-terrain tires on 17-inch deadlock wheels, and a two-inch lift courtesy of the Jeep Performance Parts kit. Monotube Fox shocks have been slotted in, for better damping and heat dissipation, plus Rubicon rock rails, steel bumpers with a Warn winch, and a steel belly pan. 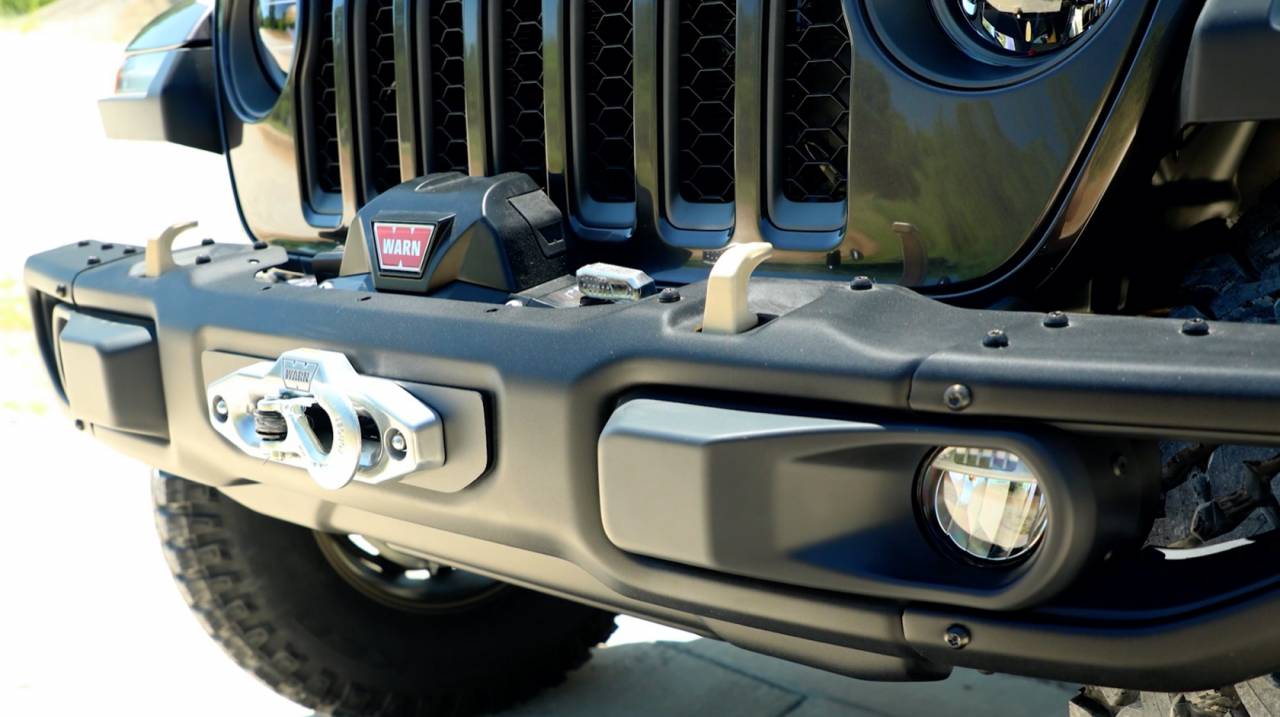 In all, Jeep says, you could ford 34-inches of water, or just enjoy 13.25-inches of ground clearance. Approach angle has increased to 51.6-degrees, breakover is 29.5-degrees, and departure angle is 40.1-degrees. 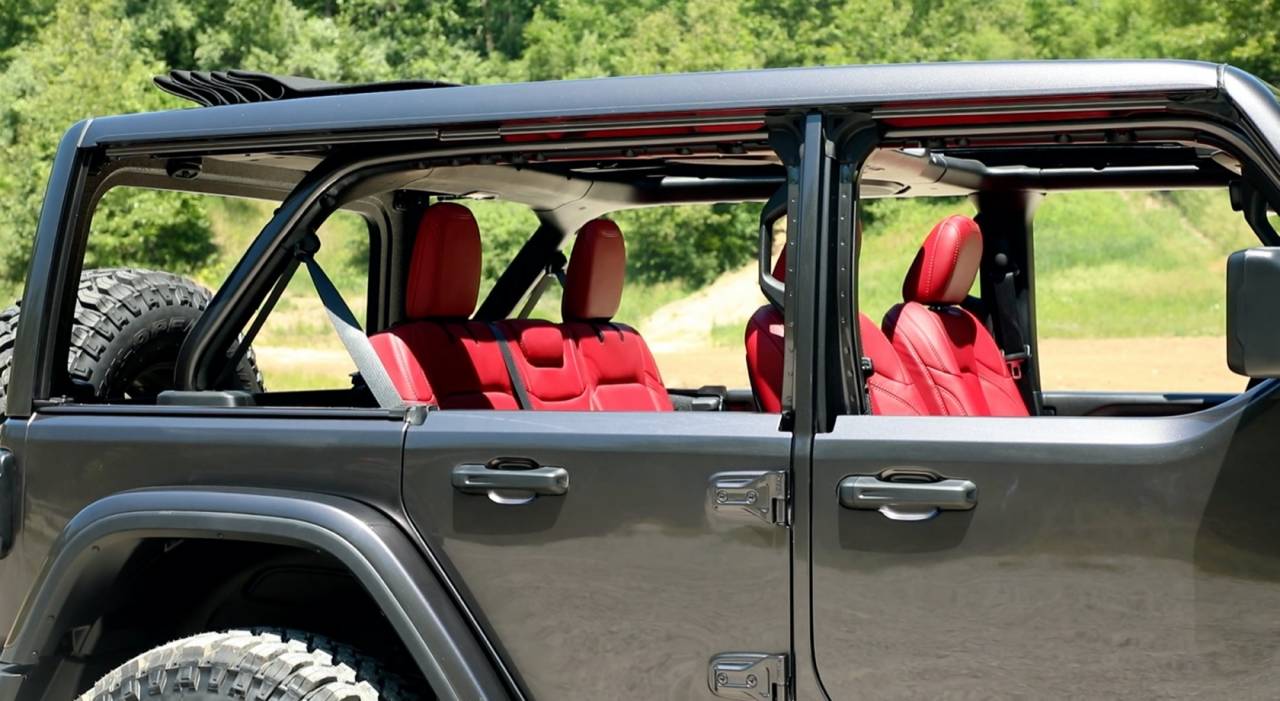 To make sure it sounds the part, there’s a two-mode exhaust as well. Hit the button, and the Wrangler Rubicon 392 Concept’s tailpipes get a whole lot louder. 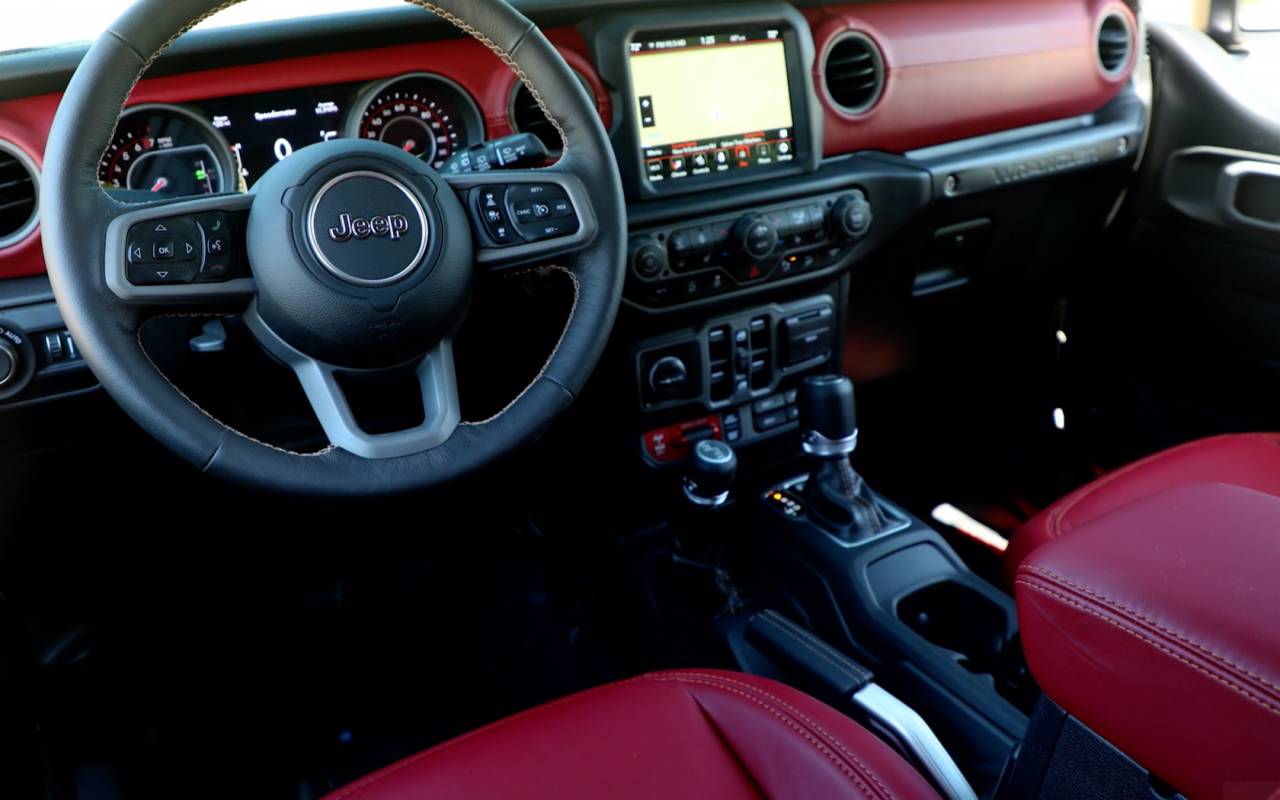 The concept is finished off with Granite Crystal paint, with bronze detailing to the tow hooks, badging, springs, shocks, and wheels. There’s also a raised performance hood and custom half doors, while the regular Wrangler donates its Sky One-touch powertop that has removable side panels. On the inside, the Wrangler cabin has been given Red Rock leather bolstered seats with gold contrast stitching, and a performance steering wheel. 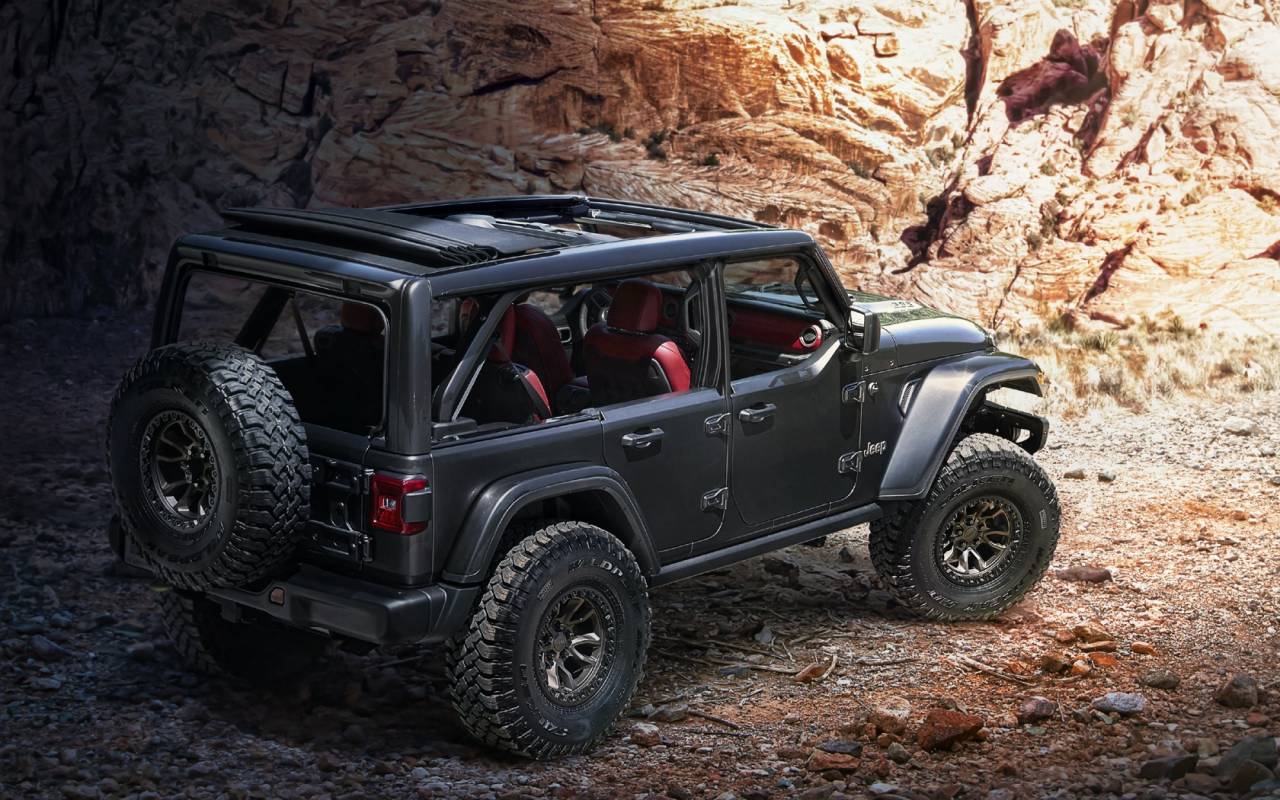 Our big question, of course, is whether Jeep will actually bring this to dealership forecourts. For a concept it’s hardly too outlandish for that to be a possibility, something likely to give Wrangler fans hope of series production, and indeed Jeep says that it’s fair to consider the Wrangler Rubicon 392 Concept as “an indication they may soon get their wish.” Seems like the new Ford Bronco may have some unexpected competition.