iWork for iCloud Beta now works for everyone

Apple surprisingly seems to be starting to open up some parts of its walled garden experience to those unfortunate enough to find themselves outside. Although it’s not exactly the full Monty, which may never happen, of course, at least now some users on other platforms using other browsers will now be able to get a taste of Apple’s iWork suite for the cloud, with a few caveats. And provided they agree to using beta version software that may or may not eat your homework.

Of course, iWork for iCloud have previously been available on the web, which is the nature of this particular brand of software, but it had two very hard requirements. You will, naturally, need an Apple ID but in order to get one, you will need to do so on Apple’s devices, whether it be an iPhone, an iPad, a Macbook, or a Mac. Despite their popularity, not everyone owns one of those.

Apple is now waiving that last requirement for those who want to get a taste of what using iWork feels like even without an Apple device yet. Whether they are on Windows, Linux, Android, or Chrome OS, they can now create an Apple ID of their very own and use the beta version of iWork for iCloud. All you need to do is head on over to the iCloud Beta site to start the process.

There are, however, a few things to be mindful of. First, it is beta softawre, and that comes with all the warnings and disclaimers that beta software usually have. Second, if you don’t own Apple hardware yet, your iCloud Beta screen will be very sparse, containing only Pages, Keynote, and Numbers. You do get 1 GB of free iCloud storage though. If you are an Apple device owner, however, you will see a few more items, including Mail, Calendar, Notes, and Find My iPhone. However, you cannot use Pages, Numbers, and Keynote unless you upgrade your iCloud to iCloud Drive, which practically means your documents will no longer be accessible from iOS 7 and OS X Mavericks devices. 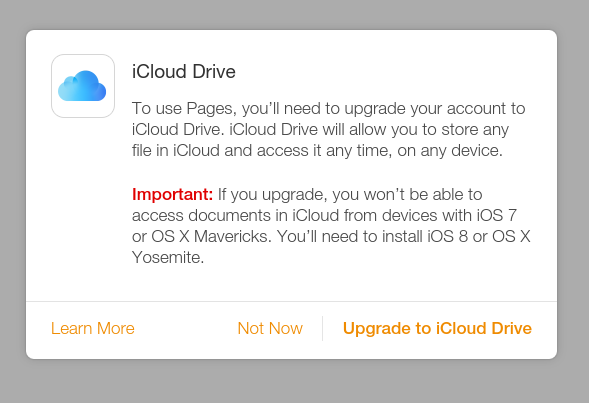 This is a rather surprising move coming from a company that has traditionally locked in its prime services to its own platform (aside from iTunes). This development could have been spurred by Microsoft‘s latest expansion of its own office apps as well. Microsoft has recently made fully available its Office apps for Android tablets and updated its web versions with a lot of new features. There is also word that Samsung might pre-install Microsoft’s Android apps on the upcoming Galaxy S6. Apple opening up the registration process to those outside Apple’s devices can very well boost the popularity and user count of its own software, which could provide greater incentive, or less resistance, to going all out with Apple hardware afterwards.