Facebook “active users” in North America dropped this past quarter for the first time in the history of the social network. Facebook peaked, and it’s time to short your usage. That’s not financial advice, it’s an “all clear” signal from me to you. Download all your old Facebook posts and photos if you must, but please feel free to set your Facebook page for self-destruct, any time!

Yesterday I started a series of articles about the big blue social network with a post called We need a new Facebook. It is my opinion that Facebook is not what it used to be – not by a long shot. Instead, I believe that Facebook has become a cesspool of degenerate content, shared by necessity, liked and re-shared by default. Instead of a place to hang out with friends, Facebook is a true drag.

But Facebook is not invincible, and Facebook is not necessarily forever. No company is – nor is any one country. Even our planet Earth is going to get consumed by our exploding Sun one day. As Facebook itself reports, users are on their way out.

Above you’ll see a chart created with data from Facebook’s Q4 2017 earnings report made into a bar graph with DataWrapper. This is a chart showing millions of daily active users, specifically. That’s an average, whereas the monthly active users number continues to grow relatively steadily.

Research released this week by Honest Data, Inc. suggested that 1 out of every 4 Americans believe Facebook is “having a negative impact on society.” The sample size here isn’t massive, but it’s big enough to get a rough estimate. Honest Data assures us that “demographic weights” are used to “ensure a representative sample.” 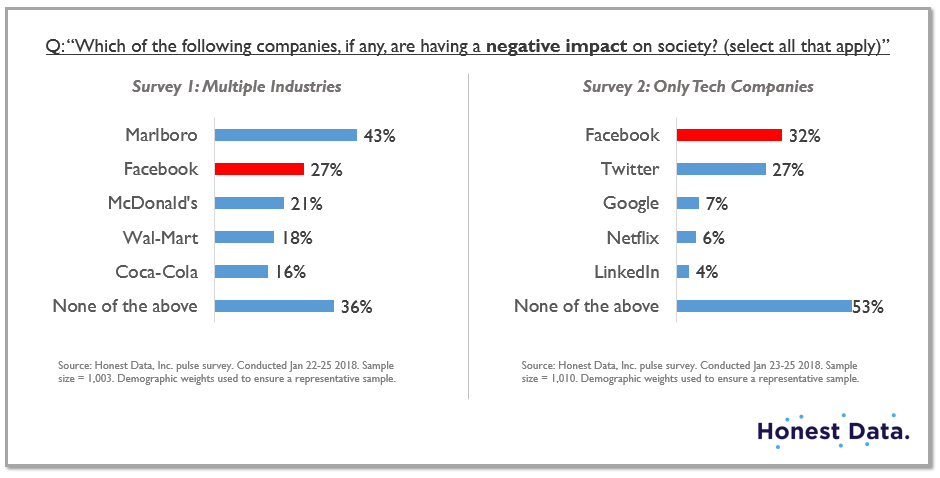 You’ll notice that Marlboro is the only cigarette company on the list in the first sample, so it’s kind of difficult to put any of these other companies ahead. When the study asks about a negative impact on society with a list of only tech companies, Facebook is the clear winner. It’s followed relatively closely behind by Twitter – another massive social network.

Once you’ve got all that data downloaded, you can delete your Facebook from that same set of settings. Hit the carrot, press the explode button. Start communicating with your friends and family with a phone call, go write a letter, meet for a movie this weekend at the theater.

Or if you prefer baby steps, switch to texting only. Or use a disappearing social network like Snapchat. Whatever brings us all back to reality – I’m all for it. Have a peek at Apple to combat phone addiction (for kids) for more reading on how mobile devices (with social networking apps, especially) are destroying our modern world.