Earlier this year Microsoft revealed their response to the $100-cheaper PlayStation 4 in the form of an Xbox One without the Kinect. Previous to this reveal of the $399 Kinect-less Xbox One, there’d only been the Xbox One with Kinect, now called a “bundle”, that was $499. Microsoft reported in July that their June Xbox One console sales had “more than doubled” due to the new standard sans-Kinect release. Fast-forward to October of 2014 – right now, that is – and that Kinect “bundle” might be on its way out the door completely.

Microsoft has also made clear that they’ll still be making the Kinect for Xbox One, but they’ll be selling it separately. One release will be the “Kinect with Dance Central Spotlight” – that’ll cost $149.99 USD. That “bundle” was made available just this week.

If you head to your local Walmart this week, you’ll notice a distinct lack of Kinect. See this pack of Xbox One units? They’re all $399 because they all come without a Kinect in the box. There’s literally not one Kinect in this store. 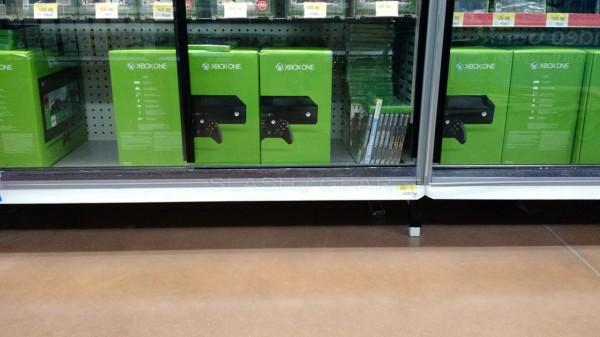 The same is true of Target stores – every Target and Walmart store we’ve checked this week has no Kinect of any kind. That might change once Microsoft’s stand-alone Kinect unit hits retail around the USA, but for now – you’re out of luck.

The next several game bundles for Xbox One feature no Kinect – not even a little bit. Above you’ll see the full contents (sans the power cord and the chat headset) of the Xbox One Limited Edition Call of Duty: Advanced Warfare Bundle.

Amazon has also dropped the Kinect Xbox One bundle. Barring your purchase of the $149.99 Kinect separate from the $399 Xbox One without Kinect, you’ll have to go without. But wait a second.

Keep in mind – these are NOT the same bundles. Have a peek at our Xbox One Review then see our PlayStation 4 Review and tell me you don’t see the differences.

Unless you only want to use the camera to log in to your console – in that case, both cameras work equally well. Have at them!