iRobot’s Roomba i7+ robot vacuum has been perfect pandemic company

You’d think that, after all this time at home waiting out the COVID-19 pandemic, I’d have got around to vacuuming more. Instead I’ve been offloading most of the responsibility to a robot, with iRobot’s Roomba i7+ arguably turning out to be the best company you could hope for (apologies to my spouse and cat) when you’re trapped indoors but still housework-averse.

We’ve never had a cleaner, in no small part because the idea of paying someone to come into the house to see what a mess it often is basically feels like torture. Then there’s the fact that, as two people with no kids who both work from home, it feels ridiculously lavish to effectively admit that we can’t find the time to clear up after ourselves. 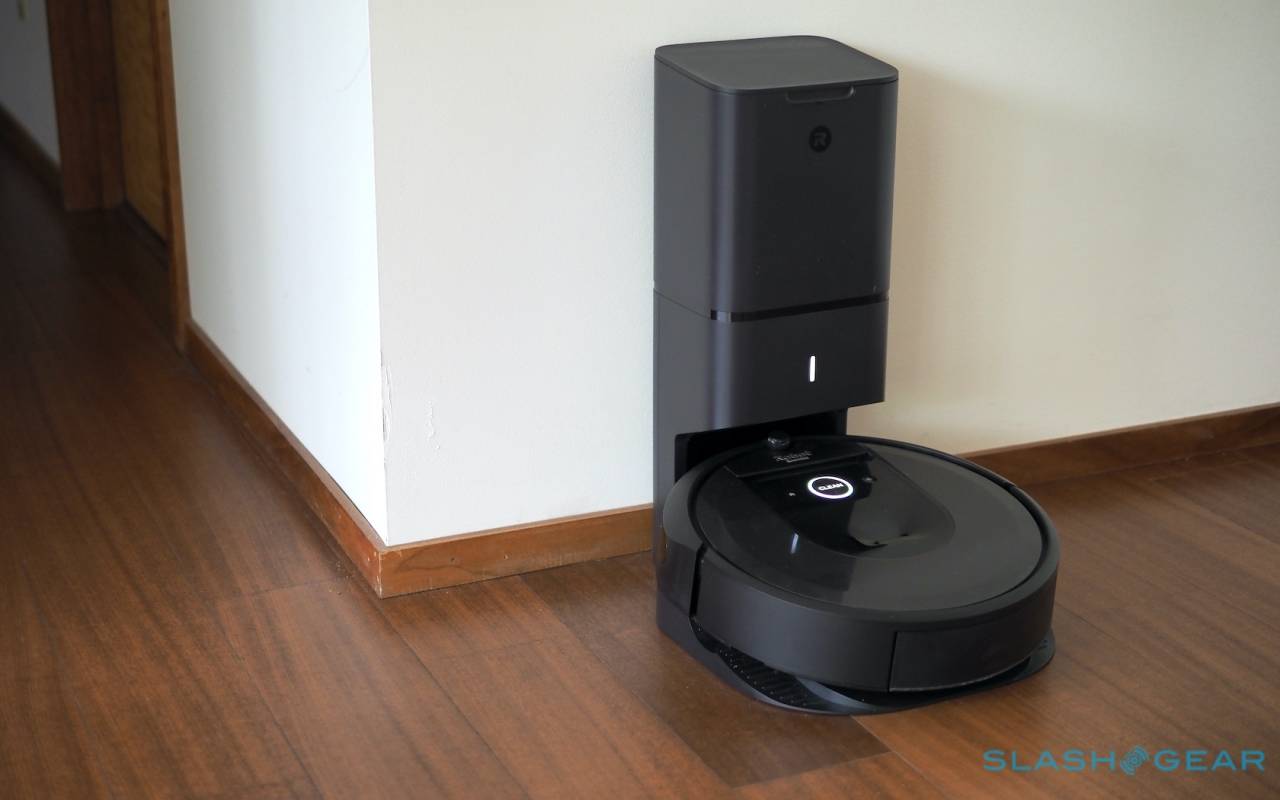 Still, the lure of washing my hands of at least the basic chores is strong. We may not be in the Jetsons world we were promised, with domestic robots pausing their relentless cleaning only to serve up some AI-powered sass – to be honest, that would probably get annoying after a while – but task-specific ‘bots are a different matter.

I’ve tried a lot of robot vacuum cleaners before, though, and never really fallen in love. Some have performed well; others have proven adept at stranding themselves – teetering turtle-style – but one of the main issues has always been the relatively tiny dustbins they have. If I need to remember to empty it every two or three vacuuming sessions, at some point it just feels easier to whip around with a regular cleaner and do it myself. 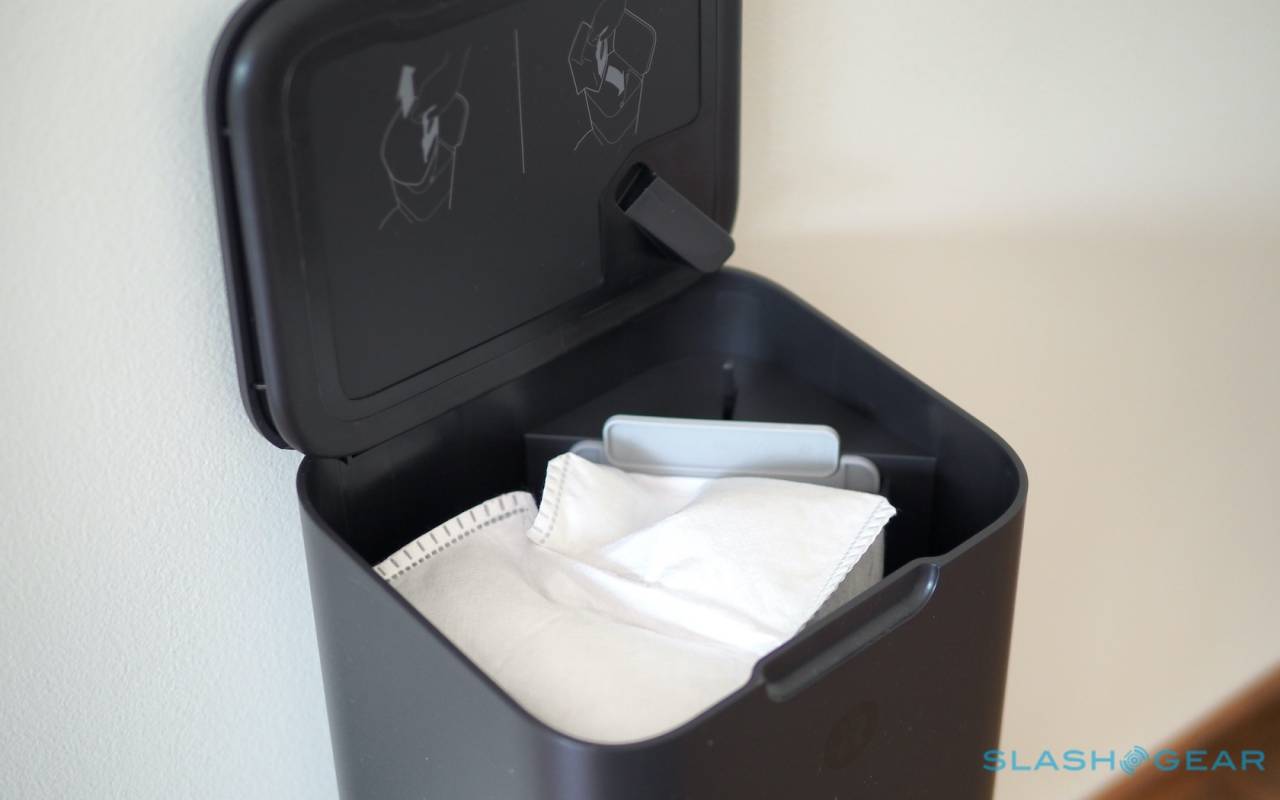 The Roomba i7+ however takes care of that itself. Its Clean Base charging station has a built-in bin of its own: when the robot docks, as it starts charging it also has what it picked up sucked out into the secondary, much larger dustbin. That can hold around a month’s worth of dust – depending on how frequently you set the robot loose; it’s about 30 full robot-bins worth – drastically reducing the amount of involvement you need to have.

That – plus the fact that where we’re living now has almost uninterrupted floors, rather than rooms all at levels just slightly different enough to trap an unwary robot vacuum – has been transformational in itself. The other big improvement the Roomba i7+ brings is in how easily you can control it. 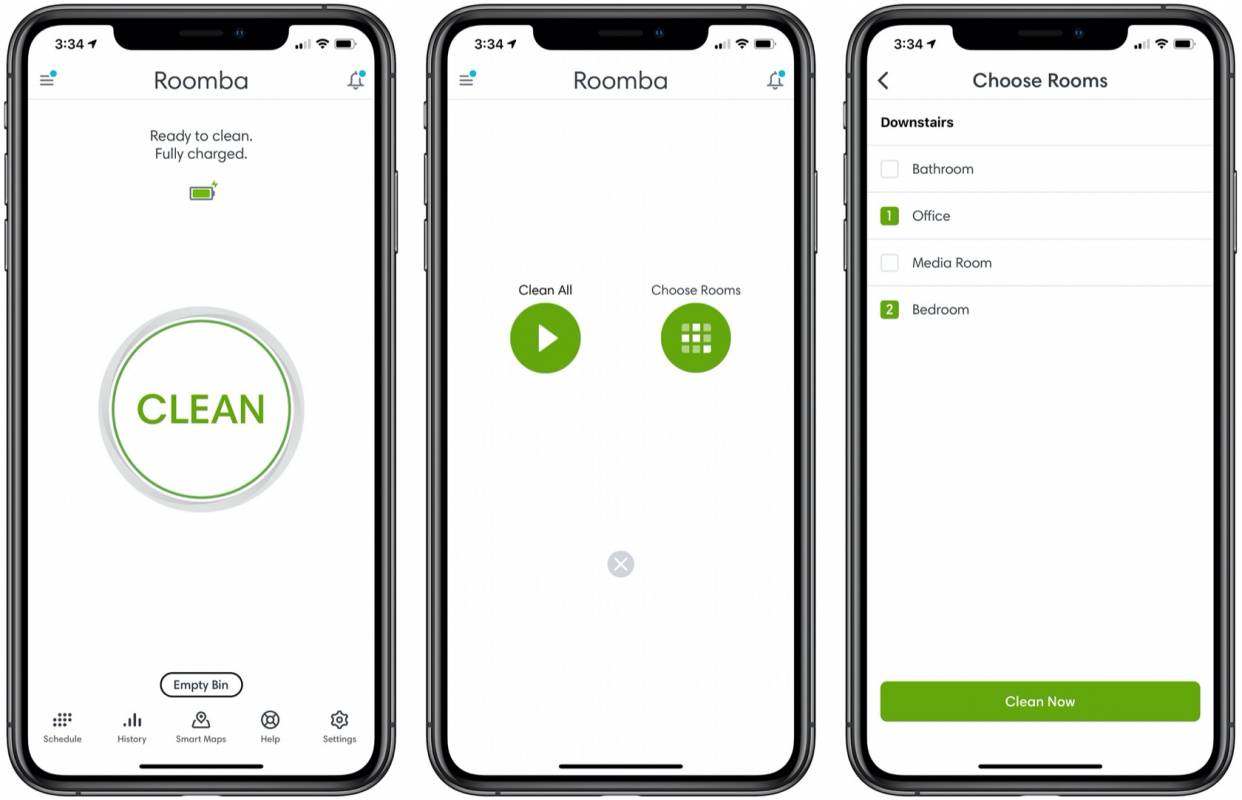 As it roams around, it builds up a map of the different rooms and obstacles in them. It takes a few runs before that’s complete, though you can speed it up with training sessions instead: then the Roomba doesn’t actually vacuum, it just maps, and so it can move faster. Once they’re finished, you can separate the map into the different rooms, and even add virtual barriers. Rather than attempt to tidy up the morass of cables around my cable modem and router, for example, I just zoned that area out in the app and the robot won’t venture into it.

With the app you can either set the Roomba i7+ loose to vacuum the whole map, or you can choose the rooms you want it to focus on, and the order in which to tackle them. Maybe I’m anthropomorphizing it, but there’s something oddly charming about seeing “Roomba is on its way to vacuum the Bathroom” in the app as it trundles around.

It’s clever, too. The Roomba i7+ can not only remember up to 10 different floor plans, it will automatically recognize which of those it’s in when you start it running. Obviously it can’t climb stairs so you’ll have to move it between levels yourself, but after that it’s a case of hitting “Go” and leaving it to its own devices. If the Clean Base isn’t on that level it will just return to where it started at the end; or, you can buy a second charging station. 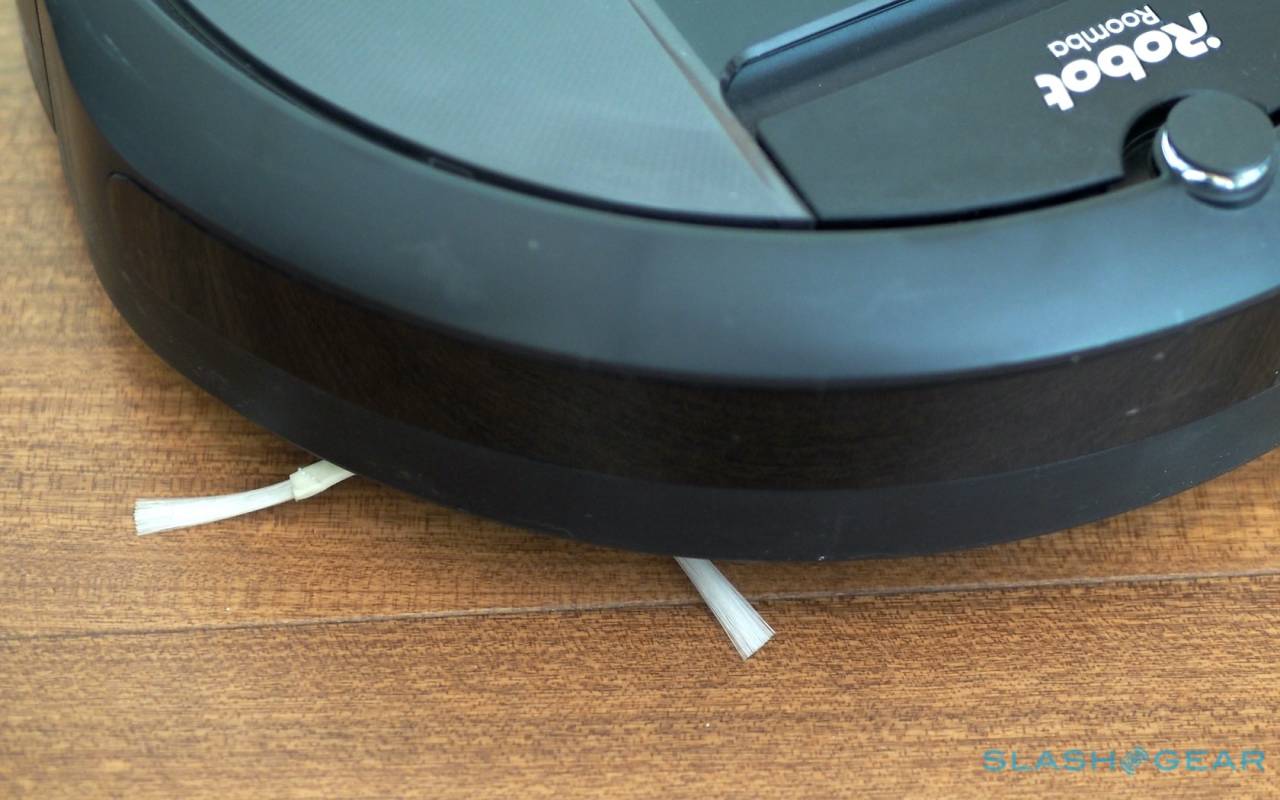 Actual cleaning performance is good, too. On hardwood floors the little spinning side brush flicks cat hair and dust right into the Roomba’s route, and it does a good job of getting to the edges of the room and furniture without constantly bumping into them. As with most robot vacuums it can inadvertently get caught on a loose cable or try to suck up lightweight rugs; very occasionally I’ll hear a plaintive bloop as it admits defeat and calls for help with a notification in the app. Still, it’s better at avoiding that than most I’ve tried, and can even crawl over raised heating vent grilles without issue. 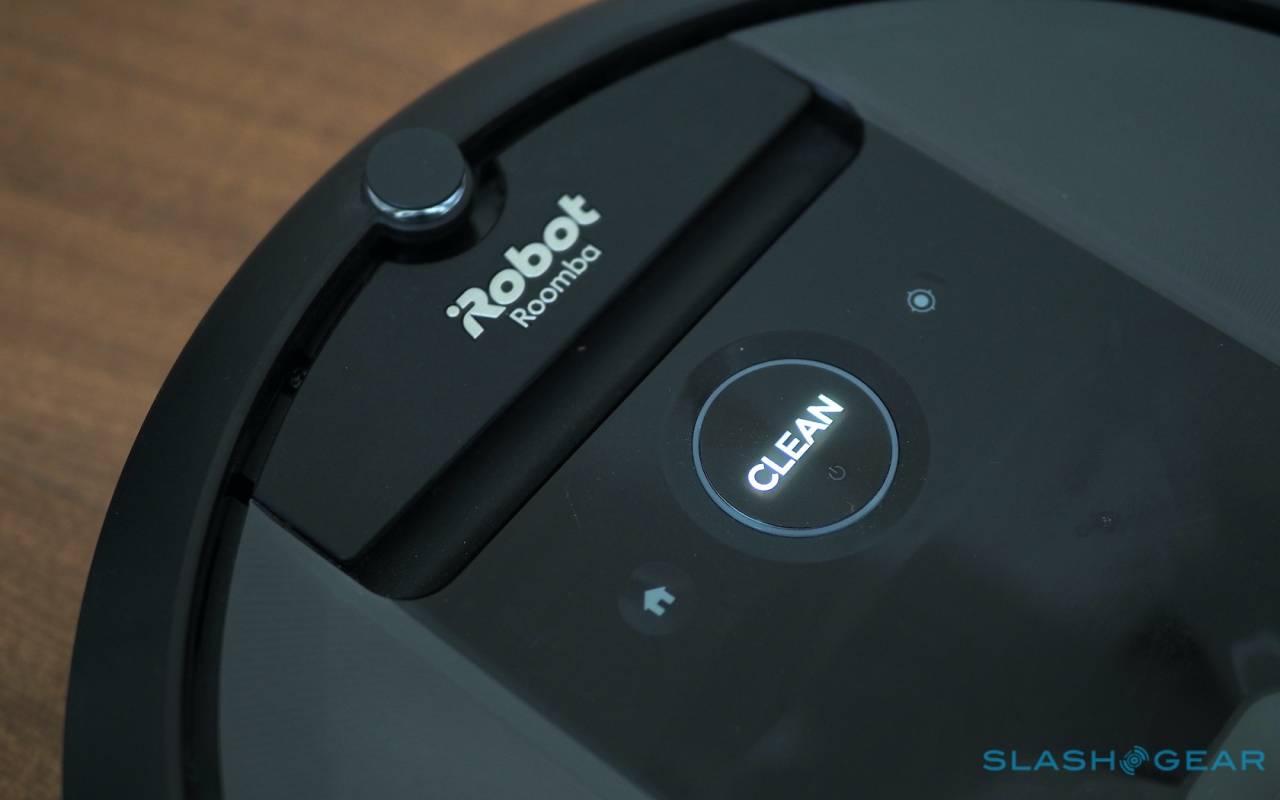 That’s not to say it’s perfect. I wish iRobot had opted for a permanent bin for the Clean Base, not a disposable bag. The argument is that pulling that out and dumping it into the trash is quicker, cleaner, and easier than emptying a reusable bin, but I’d happily expend a little extra effort in return for not having to pay $17 for three more bags. It’d also be nice to be able to schedule times when the Clean Base vacuum can’t run: the Roomba i7+ is fairly loud, but the charging base’s vacuum is even more so, louder than my regular manual cleaner, and enough to potentially disturb you if you have the robot doing its chores while you’re asleep. 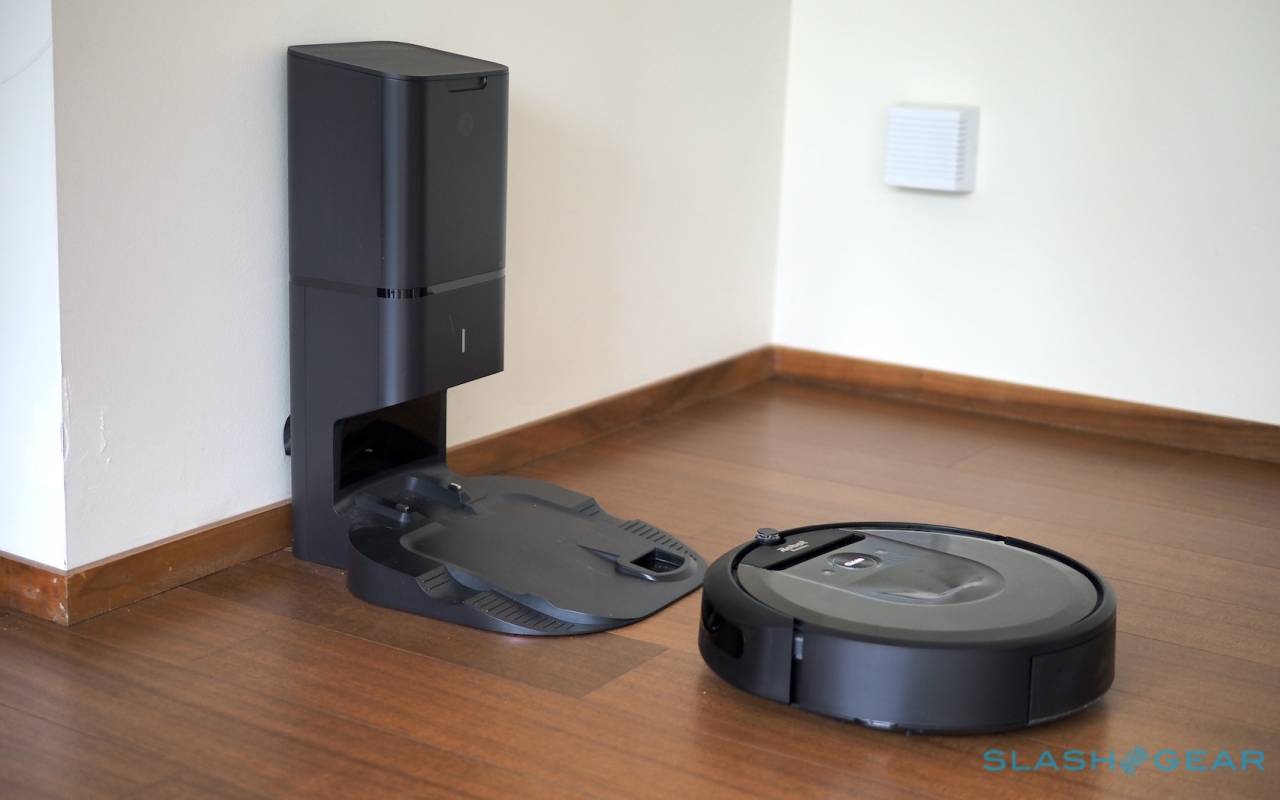 The other issue is price, though that has improved. While the Roomba i7+ launched at $949.99, you can now pick it up for $799.99. That’s still not cheap, no, and you do still have to budget for the bags, but you’re paying for an experience a whole lot closer to the hands-off vision of domestic robots than robovacs of old. As quarantine company goes, I think it’s worth it.