This week the developer of Instapaper, Mr. Marco Arment, has created a rather intriguing mock-up of what the “iPhone Plus” would look like, using specifications, tips, and rumors to push the idea of this device as close to reality as possible. The device itself would work as an in-between aside the iPhone 5 and the iPad mini, filling in the perceived “gap” left at the moment where no iOS device currently exists. The iPhone Plus (or iPhone+ or iPhone Math) would work with a 4.94-inch display and a lovely 640 x 1136 pixel (264 PPI) resolution. 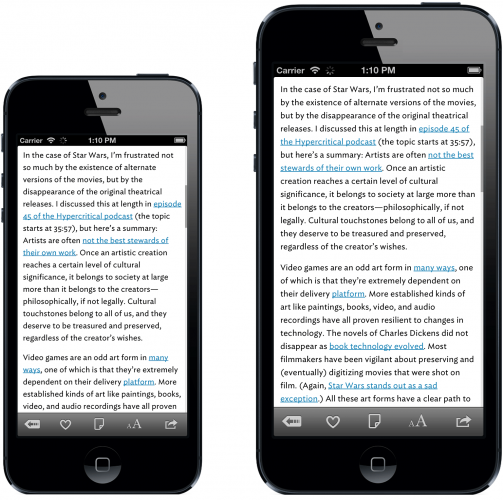 The image you see first in this post shows what Arment notes is the iPhone 5, iPhone Plus, iPad mini, and iPad 4. This device would, mind you, have a larger display than the Samsung Galaxy S III (taller, but thinner), and would still come in smaller than the current hero Galaxy Note (that being the Samsung Galaxy Note II). Another bit of logic Arment offered this week was the math that John Gruber inflicted on the public back before the iPad mini was released, essentially predicting that because displays are made on a large sheet and cut down to size.

Because of that fact, the iPad mini was predicted to use the same sheet the iPhone 3GS used, this allowing the same amount of pixels to fit on the display of a full-sized iPad display on a smaller sheet cut to size for the iPad mini. The iPhone 3GS was 3.5-inchs and 480 × 320 pixels, while the iPad mini did end up being 7.9-inches and 1024 × 768 pixels (a .05 difference in inches from what was predicted.) The math still works if you take the sheet of display used for the Retina iPad models (3 and 4) and kept the iPhone 5 display size ratio, sizing it up to 640 × 1136 pixel resolution, this across 4.94-inches of display.

With this device you’ll once again have a display size that allows developers to not have to re-size their apps as its the same aspect ratio as the iPhone 5, made with the same sheet of display technology the iPad uses now, this keeping costs down and production swift. Sound like a deal to you? Now we’ve just got to reconcile the fact that the original iPhone display which was “perfect” for the human hand and one-handed use will be dashed once more – the humanity of it all!