iPhone OS 4.0 beta 3 is out, and there are some reasonably juicy additions that Steve Jobs failed to mention when he took to the stage last month.  BGR has been digging around the new release and has turned up not only an updated multitasking system – tweaked for quicker use – but media playback controls, file sharing with iTunes and an orientation lock.

The media playback controls appear in the new multitasking UI, and can be accessed with a left swipe gesture.  As well as track-skip and play/pause there’s also a shortcut directly into the iPod app, together with the new screen rotation lock button.  The latter, like the physical lock switch on the iPad, stops the iPhone’s screen flipping with the accelerometer.

As for file sharing, that’s a new pane in iTunes that allows you to copy over documents to your iPhone when it’s plugged in, or alternatively transfer them from the phone to the computer.  Right now it’s apparently locked-down, but it does at least suggest that Apple are wising up to the fact that users want more flexibility with their mobile content. 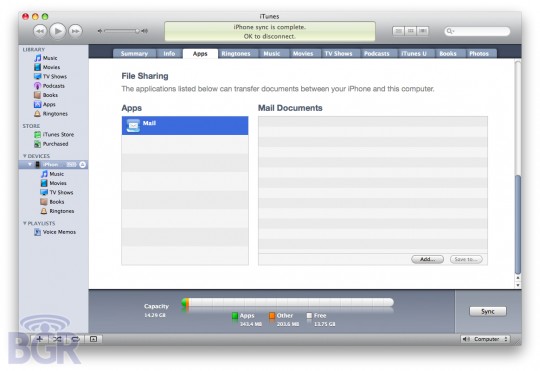