Apple’s iPhone is still the top smartphone among US buyers, according to Nielsen‘s latest figures, holding 28.6-percent of the market share compared to Android’s 25.8-percent and RIM’s 26.1-percent. However, Android adoption over the past six month period is the strongest among the three platforms, suggesting Apple’s hold on the top spot is unlikely to last.

Of new smartphone buyers over the past six months – up until November 2010 – 40.8-percent opted for an Android-based device. In contrast, 26.9-percent chose an iPhone, while only 19.2-percent picked BlackBerry.

According to Nielsen’s figures, iPhone demand has remained roughly level over the past few months, while Android demand has increased considerably from 27.5-percent in June 2010 to the 40.8-percent high in November. 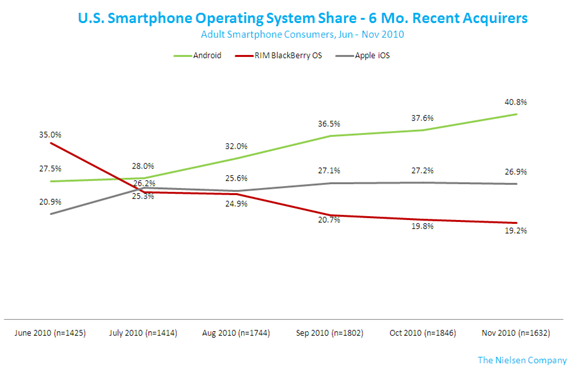