The photos of the iPhone 6 you’re about to see do not tread lightly with those of you who aren’t all about keeping their phone safely packed away from the concrete ground you tread on. It should also be made clear that the images you’re seeing are mixtures of reality and concept rendering, using a real finger to make you see the rest of the device as real – dust and reflections as well. Once you understand that, hear this: the iPhone 6 you see in less than a year may very well look exceedingly similar to these artist’s renditions.

Designer Martin Hajek was the illustrator of these images while NWE‘s Steve Hemmerstoffer helped with the concept design work. What you’ll find here is a collection of influences, starting with the iPod touch and the iPad mini. With both of these devices we’re seeing a bit of a return to round, and though the concept images here don’t show it, we wouldn’t be surprised if a design like this saw more than just black and white.

The biggest deal with this device is the fact that it’s got more of an “edge to edge” display than we’ve ever seen in the real world. Here with some form of what we understand to be next-to-impossible display casing technology, the iPhone 6 sits in a chassis with no border but the metal that holds the front display’s glass down above and below. 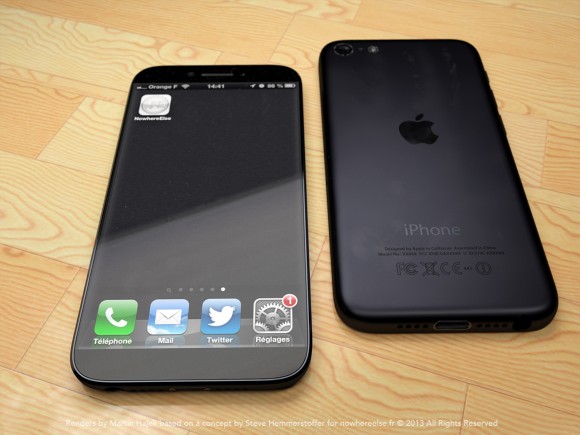 You’ll also notice the lack of a home button – a piece of hardware that’s been a staple in every iPhone and iPad to date. Here these forward-thinking minds have decided that, like the touchpad on your MacBook, you’ll be able to push down the bottom bit of the front of your iPhone 6 to get that same home button functionality. Intrepid iOS 6 users will know that a quick visit to Settings – General – Accessibility – AssistiveTouch will bring you the ability to skip the home button altogether on any iOS device you like. Perhaps it’s a pre-cursor to the absence of the button in the hardware as well? 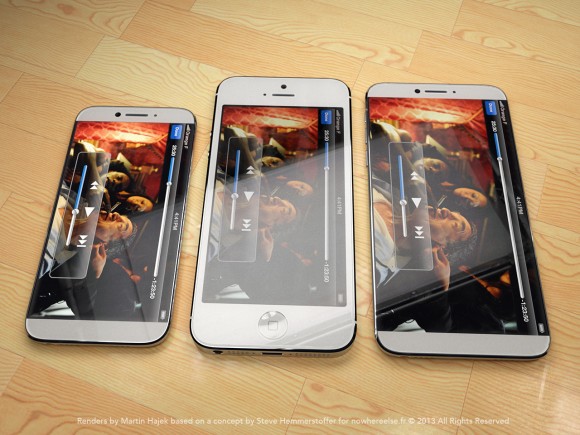 That means that the iPhone 6 could potentially be thinner and lighter than the iPhone 5 with the absence of a bezel on the right or the left. The larger model then is set to open up a whole new larger window for Apple with a display that’s large enough to take on the more beastly Android devices on the market – along with the absence of a bezel keeping the device small enough not to look absurd when used as a smartphone.

And it’ll all connect perfectly well with the iWatch – or the iCompanion, as it was suggested earlier today by your humble narrator. Have a peek at the timeline below to see more iPhone 6, iPhone 5S, iWatch, and everything in-between. We’re coming up on a rather strange and exciting season for Apple one way or another – stay tuned!