After hearing earlier this month that Apple may be speeding up its update cycle for the iPhone, several photos have leaked that are claimed to be of the rear housing of the iPhone 5S, a.k.a. the next iPhone. The photos show both the inside and outside of the shell, and from first glances, there’s not many differences between it and the iPhone 5.

ETrade Supply ended up posting a couple of photos of the alleged rear housing the iPhone 5S, and it looks like the next iPhone will sport the same 4-inch display and almost exactly the same shape and size as the iPhone 5. The outside of the outer shell looks practically identical to the iPhone 5, but the inside is where all the small changes are.

The most obvious change on the inside is the arrangement of the screw holes for attaching the logic board — the middle screw has been moved down slightly towards the bottom screw. Aside from this, there are a few other subtle differences between the two shells, and they’re highlighted in purple, blue, and yellow in the photo above. 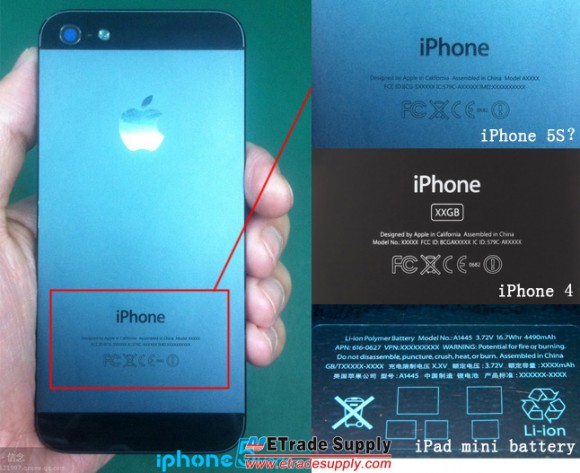 Again the back of the rear housing looks identical to the iPhone 5, except for the fine-print information at the bottom being replaced by Xs, which may indicate a prototype. Of course, take this rumor with a grain of salt. It’s certainly possible that this iPhone 5S part is simply an old iPhone 5 prototype design that was scrapped in favor of the design that was ultimately used.