This week a tip has appeared noting several details on the next-generation iPhone, specifically on its price – that being the same as the iPhone 4S is now – and the model number. This iPhone 5, as it’s currently being called, has been tipped to 9to5mac as being part of the iPhone N42 model line, this being the generation that does not work with NFC – this is in contrast the N41 model being tested earlier this year which has not made it to final production. The price structure of the iPhone 5 in model N42 is being shown as matching the current iPhone 4S in stores right this minute.

The pricing will more than likely bump the iPhone 4S back to the prices that the iPhone 3GS is currently at, while the 3GS will likely be axed from Apple’s stores altogether. Pre-orders for the iPhone 5 are being tipped to be taking place immediately after the announcement event (or at it) on September 12th, and shipping will start in the USA. The iPhone 5 will not ship to all countries immediately, so this same source says, but will be appearing in the USA first without a doubt. 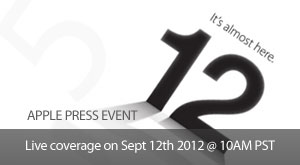 Several accessories have also been tipped to be shipping at the same time as the iPhone 5, those being first and foremost an adapter for the smartphone to be able to work with previous-generation docking devices. Cases and and cables are also set to be popping up at the same time working with the iPhone 5 specifically. Have a peek at our iPhone 5 timeline below to see some key tips and leaks from the past few weeks, and stick to our Live Portal for the big event on September 12th!