As the next generation of Apple mobile products ramp up for a late 2012 release, it’s not the iPhone 5 that’s getting the most press this week, it’s the iPad Mini. A device that’s not yet been revealed or even confirmed to be real, but is gathering its strength to capture the imaginations of couch-sitters across the nation nonetheless. An iPad Mini, that being a device that sits in-between the iPhone and the iPad for screen space, will be make for everybody to use everywhere, but will tend specifically to the Apple iCloud-connected home.

This next-level device nearly-handheld device very well could be a rule-breaker for Apple in that it’ll have a smaller screen and not quite the same pixel density of the “Retina quality” displays we’ve seen on the iPad 3 and the new MacBook Pro. This model iPad will be made to be so inexpensive that it’ll be much more difficult for people to say no to simply going to an Apple store and picking one up than it’s ever been before!

A smaller iPad will be perfectly sized for kids, will be great for tossing in one’s purse, and might even fit into your back pocket. 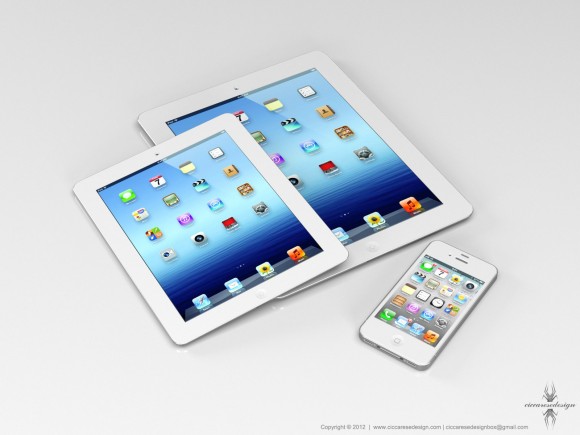 But why would Apple break their one rule, the one that says that they make only a few products and make them all well? They’ve already begun to expand beyond that limit with the MacBook Pro line. There’s a new MacBook Pro 2012 model as well as a Retina quality display-having MacBook Pro. There’s also more than one kind of MacBook Air out at the moment, different generations on the market all at the same time, and for a while you were able to purchase the iPad, iPad 2, and iPad 3 in the online Apple store all in the same basket.

So Apple will do the following, and of course this is just my hypothesis: they’ll fulfill their destiny, that being to create a tablet device (the iPad Mini) that’ll be inexpensive enough to produce that they’ll be able to work with not only a much more vast cross-section of users across the world, but with students as well. An iPad Mini inexpensive enough for a classroom to buy for students to use in-room day to day is a next-level winner for Apple across the United States, and possibly across the world.

Have a peek at the timeline below with all of the recent tips, leaks, and rumors surrounding the fabled iPad Mini. See if you can hypothesize your own conclusions on what Apple might be conjuring behind the scenes – and ask yourself if you’d buy a $200 iPad in the very near future!