iPad 2 Sold Out In China In Less Than Four Hours

The Apple iPad 2 had just launched in China early this morning and was sold out in less than four hours, according to the folks at M.I.C. Gadgets. Despite the copious iPad copy-cats you could probably find in the country’s electronics shops, the genuine iPad 2 still drew outrageous crowds.

Apparently the scalper presence is so commonplace over there a large yellow sign board was erected with the following message (translated by M.I.C. Gadgets):

“This district forbids scalpers to sell stuff to customers… Behind the yellow board, it’s a special zone for scalpers to gather around.” 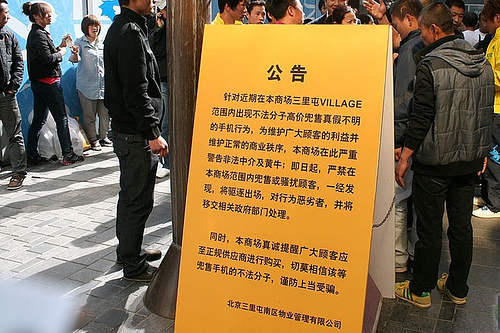 Scalpers outside were spotted with stacks of iPad 2s, and they generally sold them for a markup of 200-400 yuan ($30-60). And considering that the tablets sold out in less than four hours, the scalpers must have done well.

The iPad 2 had sold out in less than a week in South Korea, Singapore, and Hong Kong. The supply shortage is now believed to involve the LG supplied displays.