When you’ve got a child that knows how to use a touchscreen and a mess of web-connected machines around the house, it’s only a matter of time before you have a massive bill for in-app purchases from all angles. At least that’s what the reality of the situation was before a few well-placed fixes were put in place back a couple of years ago when Apple had a class action law suit on its hands – one that’s just now being delivered on in the form of a home page for those affected.

What Apple has delivered in the end result of this suit is a page that allows for easy access on the part of participants in the suit to grab iTunes credits and/or full refunds from the company. This page notes that a $5 iTunes gift card will be available for claim by some users while in others, a credit “equal to the total amount of Game Currency that a minor charged to your iTunes account without your knowledge or permission within a single forty-five day period.”

Those users no longer working with an active iTunes account and having a claim of above $30 will be able to be sent a cash payout.

The suit includes United States residents that had in-app payments sent in by a minor from a qualifying app before May 2nd, 2013. According to the official massive URL-tagged website iTunes in-app purchase settlement dot com, this qualification range is set as follows: “Qualified Apps consist of all apps from the App Store in the games category with an age rating of 4+, 9+, or 12+ that offer in-app purchases of consumable game currency.” 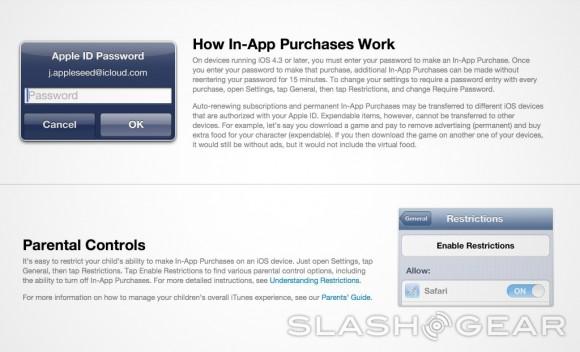 While the suit was filed in 2011, the final result of the case has a claim deadline for January 13th, 2014, and a deadline to object or opt out of the whole settlement is set for August 30th, 2013. This case was also recently joined by an Apple-made in-app purchase guide for those not in-the-know.