Just three days ago, Apple released the fifth developer beta of iOS 9.3. Considering iOS 9.3 beta 4 was released barely a week before that, you can get a feeling that Apple is quickly doing one last round of polish. Which could mean that the final release is indeed just around the corner, a corner that has “March 21” on its name. But while we just count down the days before Apple’s much awaited early 2016 event, let’s take a quick look at some of the things waiting for your iPhone or iPad when the fated day truly arrives.

This one is solely for the iPad Pro owners in the crowd. It didn’t really make sense that you couldn’t actually use the Apple Pencil outside apps but, for one reason or another, Apple removed that capability. After receiving no small amount of flak for it, iOS 9.3 will bring it back. Now you can swipe and poke with your Pencil to your heart’s content, whether you are in Autodesk Sketchbook or on your homescreen. It’s not like the iOS interface requires the use of a plastic prod, but when you’re already holding the Pencil in a writing position, having to switch to your finger breaks your flow.

The return of this Pencil Power could perhaps also be tied into the arrival of a smaller iPad Pro, the rumored 9.7-inch version. A smaller slate like that could use a tip for navigating especially narrow spaces.

Night shift is perhaps the most talked about feature for iOS 9.3, both in good and in bad ways. The bad comes from how some would use the context to illustrate how Apple usually chokes or pushes out third party apps, only to release its own similar app or feature later. Controversy aside, Night Shift finally brings the much wanted feature of being able to adjust the levels of blue light produced by the display, shifting to warmer colors as the day changes to night. 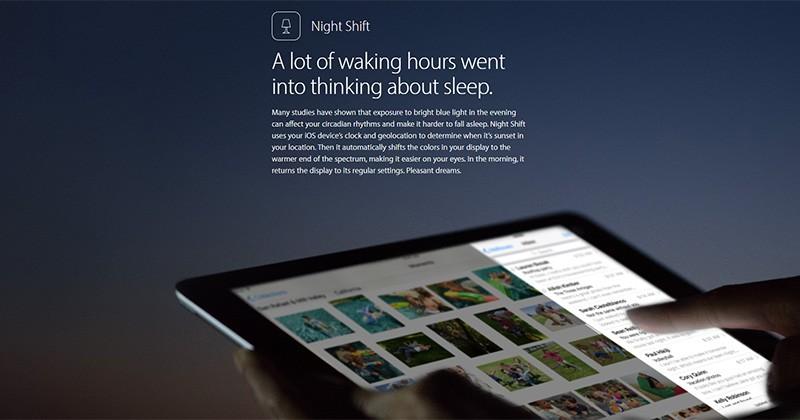 This particular feature has undergone numerous changes already. For example, the control center toggle for the feature has been simplified. Or rather, it no longer makes a rather annoying notification whenever you turn it on or off from there. The full controls can still be see in the Settings app, now with options for automatically scheduling Night Shift or simply turning it on until tomorrow. Curiously, Apple has opted to change the labels for the “Color Temperature” slider from Cooler and Warmer to Less Warm and More Warm respectively.

Excited users of the new Night Shift feature should be aware of one particular caveat. The feature doesn’t work when Low Power Mode is enabled, perhaps due to the feature draining more battery than necessary, compared to a normal screen operating mode.

Your boss is watching you

It isn’t unusual for companies to issue their employees with smartphones and then expect to have some level of control and monitoring over those devices. And the employees, of course. That, however, can sometimes be open to abuse. To balance the power a bit, Apple now lets users now when they are being monitored by their bosses, or their company’s IT, and what they are monitoring, whether it be Internet traffic or location. It’s not exactly something to be used to help users evade the monitoring but to be aware of their privacy or intrusions on it.

Bosses, or at least system admins, do get some new powers, like being able to lock a screen to portrait or landscape orientation, filter apps, or blacklist them. The usual stuff for managing company devices. These, together with upcoming classroom features as well, demonstrates Apple’s more concerted efforts to get deeper into school and businesses.

Your boss shouldn’t be the only one doing sleuthing on what you’re iPhone is doing, with or without you. Users should also be aware of what’s using up their resources, especially increasingly finite data. When Apple introduced the new Wi-Fi Assist feature, there was an uproar because of how the feature was enabled by default and without users knowing better. This has led to claims of hundreds, if not thousands of dollars in charges. While Apple hasn’t exactly turned back from the feature, it has at least introduced a counter that will objectively prove how much data Wi-Fi Assist is really consuming. It’s still up to the user to leave it on or off, provided he or she knows about it in the first place.

Fixes and efficiency all around

Not all changes need to get dazzling headlines. Even the smallest of fixes, if it addresses major annoyances, can be heaven sent. For example, fixing notifications so that they truly appear on the Apple Watch is no small prayer answered for many users. Protecting some Notes with Touch ID makes the app a more viable Diary, not to mention Day One or Paper rival. And making the OS run just a little bit faster without requiring users to upgrade to newer devices is definitely something to look forward to, no matter your particular Apple device.

iOS 9.3 isn’t meant to be a huge and ground breaking new iOS version, something that isn’t scheduled to happen until later this year. It is more an incremental step up, though it does have its fair share of exciting new features. That said, there might also be a few unwanted surprises lurking here and there, ready to jump at users when the update rolls out. As to when that will happen, all bets say that Apple will announced iOS 9.3 in two weeks time, when it also announces the iPhone SE and the 9.7-inch iPad Pro. We’ll then cross our fingers that the update rolls out quickly after that.