Siri is getting an upgrade, with the new iOS 7 bringing an updated, more intelligent version of the digital personal assistant. The new Siri fits in with the reworked iOS 7 graphical design, of course, with a flexing, flowing speech ribbon running across the bottom of the screen when you’re speaking to the service. However, it also has a new voice, with new audio samples for more realistic interactions.

There’s now a choice of male or female voices in the English language setting. Meanwhile, Apple also has new voices for French and German language options; more will be coming in the pipeline as they’re recorded, Apple says.

Siri is also hooked into more services than before, with links to Twitter as well as the ability to show Bing search results. That’s undoubtedly a snub to Google, switching to Microsoft’s rival search engine. 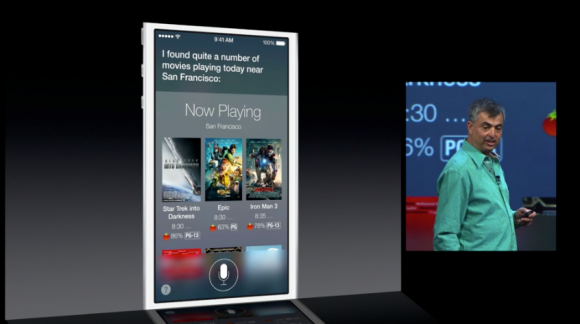 There’s also Wikipedia integration, pulling in results from the open-source encyclopedia directly into the Siri results page. That has had a layout change, too, making the information more readily understood.

Siri can also pull in photo search results; so, for instance, you can ask “Show me pictures of waves at Mavericks” and the digital assistant will show up a page of thumbnails. Tapping on any opens up the full image, as you’d expect.