Today is the day when all you iOS users on your iPhone 4S, iPad 2, iPod Touches and the rest get your updates to the next version of Apple’s mobile operating system, iOS 5.0.1, this update a fix for several bugs that have been plaguing a collection of users since the launch of 5.0. This update brings first and foremost the battery fix to the issue we’ve been having over the past few weeks. Next there’s an update for iPad (the original) where you can now use the same gestures you’re able to on, for example, the iPad 2. These and more can be found below along with how you’ll get the update for yourself.

This update also resolves bugs that were present when users were using Documents in tangent with the Cloud, and improves voice recognition for Australian users when using dictation (and Siri, we must assume.) This update is from essentially every version if iDevice including iPhone 4S, iPhone 4, iPhone 3GS, iPad 2, iPad, iPod Touch 4th generation, and iPod Touch 3rd generation. To get this update, you’ve only to plug your device in to your computer and start up iTunes, hit your device on the side bar, and find the Version row under Summary OR you could just wait for the over the air update which you’ll only have to tap GO for. Either way, updates will be yours soon! 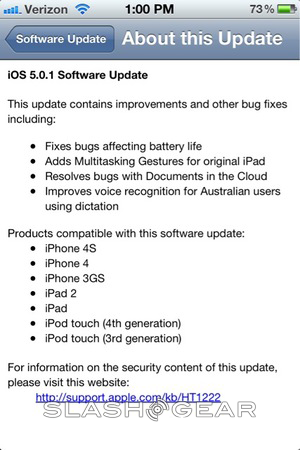 For those of you that have not updated to iOS 5 yet and are wondering what this party is all about, head back to our iOS 5 Review. Also feel free to watch the Siri hands-on video below to see how lovely that new looker works. Once you’ve updated to the newest version of iOS 5.0.1, let us know how it went for you and if the update clears up all your issues! 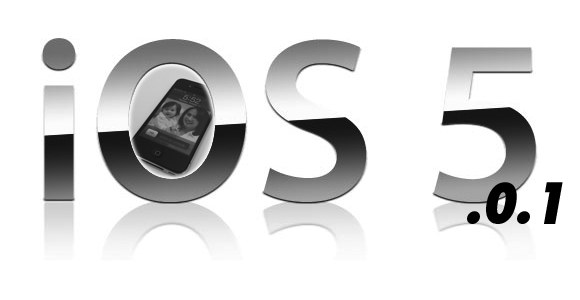