Uber’s oft-criticized location tracking has been reined in with the arrival iOS 11, with Apple forcing app-makers to give more granular controls over privacy to users. The ride-sharing app always made use of location services on the iPhone to allow drivers to navigate to their pickup, of course, but that proved insufficient for Uber’s appetites. In an update in 2016, Uber decided to restrict an existing location privacy option that iPhone users had previously been enjoying.

By default, Apple allows for three levels of location permissions for apps. Users can choose to allow services to have “always-on” access to their permission, which works even when the app is not being used, or “when-in-use” which only shares that data when the app is active. Uber decided not to offer the latter setting, however, meaning users were forced to pick between “never” sharing location, the third setting, or always doing so.

At the time, though it saw Uber criticized in the media, such a decision was permitted under Apple’s developer policies. Come iOS 11, however, and those policies have changed. Now, developers have to offer the “when-in-use” setting, rather than being able to hide it. 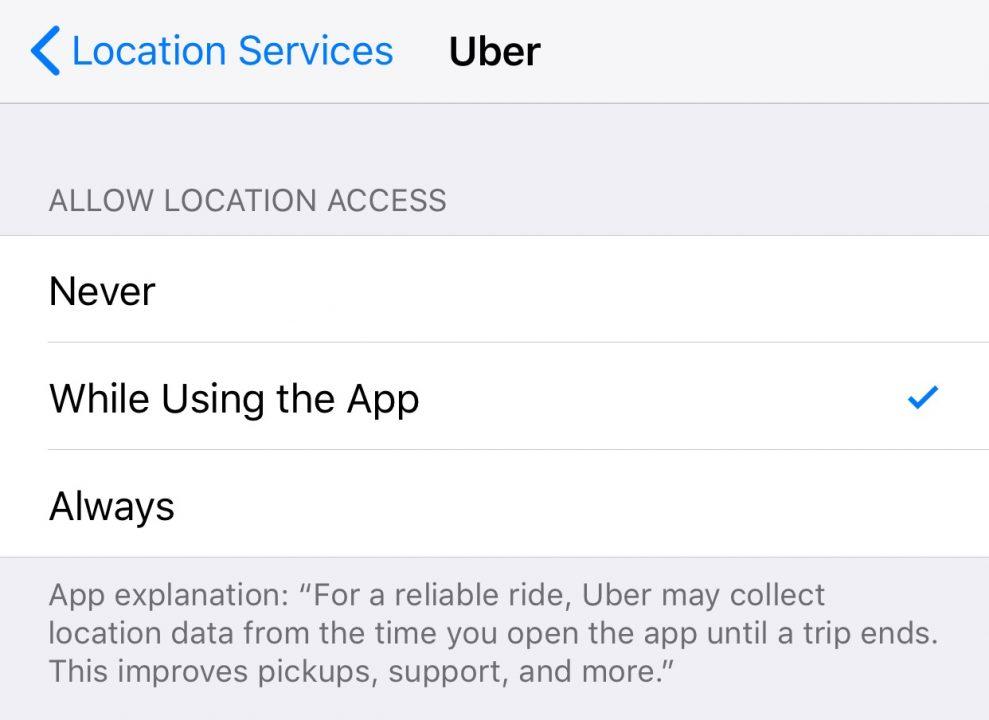 Even if you’re not running iOS 11 on your iPhone or iPad, however, you’re still getting the benefit. Because Uber changed the app completely to reflect the new policies, as Business Insider points out, those using it on iOS 10 or earlier will also find the third location privacy option has been restored. You can change it by going to Settings > Privacy > Location Services > Uber.

It’s not the only time Uber has faced criticism for its attitude toward its users’ locations. Earlier this year, it backtracked on a previous feature which allowed the app to follow users once they’d exited the car. Uber had claimed that the five minutes of monitoring was to ensure rider safety as well as improve its services, but the justifications earned it concerned attention from the US government among other complaints.

Still, although this improvement at the metaphorical hands of iOS 11 is welcome, Apple’s new software hasn’t been without its own controversies. Most recently, Apple has been criticized for the behavior of the WiFi and Bluetooth toggles in the iOS 11 Control Center. While tapping them might lead you to believe that they disconnect the wireless services completely, as was the behavior in the old Control Center in iOS 10 and earlier, that’s changed in the new iOS.

Instead, tapping either button simply disconnects the current WiFi or Bluetooth link. The radios themselves are left operational in the background. If you want to shut them off altogether – whether for security purposes or something else – you have to go into the Settings and do so there.