Intel isn’t willing to let ARM grab all the ultraportable mindshare, and the chip behemoth has obviously decided that some judicious rebranding is what’s needed. At Computex 2011 day one, Intel announced its new Ultrabook segment, initially using second-gen Sandy Bridge Core processors (before graduating to 22nm Ivy Bridge chips in early 2012) in sub-0.8-inch thick chassis and with “mainstream price points” that come in under $1,000. Intel expects Ultrabooks to account for 40-percent of consumer laptop sales by the end of 2012, with the first models on the market in time for the 2011 holiday season.

The first Ultrabook itself is a notebook we’ve already seen: ASUS’ UX21 which broke cover yesterday. The UX21 has a 0.66-inch casing, comfortably slotting inside Intel’s depth guidelines despite using current Sandy Bridge processors rather than Ivy Bridge, along with a 7hr battery and SSD storage for instant-resume. 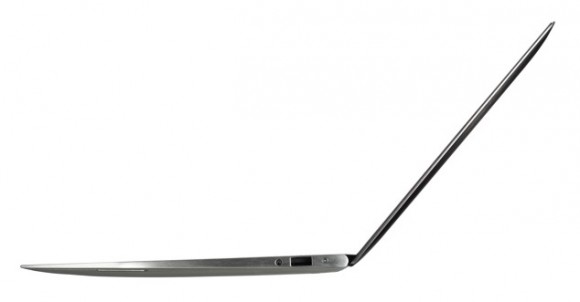 Beyond Ivy Bridge comes Haswell, in 2013, Ultrabooks based on which will supposedly use over 50-percent less power than previous ultraportables. Intel is yet to detail Haswell much more than that at this stage.

During the opening keynote speech at Computex, one of the world’s largest technology trade shows, Maloney provided further details on the significant changes Intel is making to the Intel® Core™ processor roadmap to enable this new category. He also reiterated Intel’s push to accelerate the pace of innovation for Intel® Atom™ processor-based system-on-chips (SoCs) for netbooks, smartphones, tablets, and other companion devices.

“Computing is taking many forms,” said Maloney. “Technology innovation is a catalyst, and we believe the changes Intel is making to its roadmaps, together with strong industry collaboration, will bring about an exciting change in personal computing over the next few years.”

Intel’s vision is to enable a new user experience by accelerating a new class of mobile computers. These computers will marry the performance and capabilities of today’s laptops with tablet-like features and deliver a highly responsive and secure experience, in a thin, light and elegant design. The Ultrabook™ will be shaped by Moore’s Law and silicon technology in the same way they have shaped the traditional PC for the past 40 years.

Maloney described three key phases in the company’s strategy to accelerate this vision, which begins to unfold today with the company’s latest 2nd Generation Intel® Core™ processors. This family of products will enable thin, light and beautiful designs that are less than 20mm (0.8 inch) thick, and mainstream price points under US$1,000. Systems based on these chips will be available for the 2011 winter holiday shopping season and include the UX21, ASUS* Ultrabook™. ASUS Chairman Jonney Shih joined Maloney on stage to showcase the company’s new ultra-thin laptop based on the latest 2nd Generation Intel Core processor.

“At ASUS, we are very much aligned with Intel’s vision of Ultrabook™,” said Shih. “Our customers are demanding an uncompromised computing experience in a lightweight, highly portable design that responds to their needs quickly. Transforming the PC into an ultra thin, ultra responsive device will change the way people interact with their PC.”

Building on the latest 2nd Generation Intel Core technology, Maloney outlined the next generation Intel processor family codenamed “Ivy Bridge,” which is scheduled for availability in systems in the first half of 2012. Laptops based on “Ivy Bridge” will bring improved power efficiency, smart visual performance, increased responsiveness and enhanced security. “Ivy Bridge” is the first high-volume chip based on Intel’s 22 nanometer (nm) manufacturing technology that uses a revolutionary 3-D transistor design called Tri-Gate announced in May. Maloney also highlighted complementary USB 3.0 and Thunderbolt™ technologies which are part of Intel’s ongoing work to drive the PC platform forward.

Following “Ivy Bridge,” planned 2013 products codenamed “Haswell” are the third step toward achieving the Ultrabook™ and reinventing the capabilities of the laptop in ultra thin and light, responsive and more secure designs. With “Haswell,” Intel will change the mainstream laptop thermal design point by reducing the microprocessor power to half of today’s design point.

Maloney highlighted key milestones and additional details on upcoming generations of Intel Atom processor-based platforms for tablets, netbooks and smartphones. The Atom processor will outpace Moore’s Law, accelerating from 32nm through 22nm to 14nm within 3 successive years. Having a cadence of a new-process-generation every year will result in significant reduction in transistor leakage, lower active power and an increase of transistor density to enable more powerful smartphones, tablets, and netbooks with more features and longer battery life.

Reaching its 100 million-unit milestone this month, Intel is preparing its next-generation netbook platform, codenamed “Cedar Trail.” “Cedar Trail” is the first netbook platform based on Intel’s 32nm technology, and will enable ultra-thin, fanless designs with new capabilities such as Intel® Rapid Start technology which provides fast resume, Intel® Smart Connect Technology which enables an always updated experience even during standby, Intel® Wireless Display and PC Synch, which let users wirelessly update and synchronize documents, content and media across multiple devices. In addition, the new platform is expected to enable more than 10 hours of battery life and weeks of standby. “Cedar Trail” will support leading operating systems, such as Microsoft Windows*, Google Chrome* and MeeGo*.

In addition, Maloney showcased more than 10 tablets, running on three different operating systems, that are available today based on the Intel Atom processor Z670. The platform already has more than 35 design wins since its launch in April, with several convertibles, sliders and other innovative designs on shelves now and more coming through the rest of the year.

Maloney also discussed “Medfield,” Intel’s first purpose-built 32nm platform for smartphones and tablets. “Medfield” has been optimized for both low power and high performance and will deliver long use-time, rich media and gaming, and advanced imaging capabilities. To illustrate this point in tablets, Intel showcased a “Medfield” design running Google Android* 3.0 (“Honeycomb”) for the first time. In production later this year, the platform will enable sub-9mm designs that weigh less than 1.5 pounds for tablet designs in market the first half of 2012. It will support a range of operating systems including Android and MeeGo.

According to Maloney, “The work Intel is doing with the Intel® Atom™ processor roadmap, coupled with the significant changes we are making to our Intel® Core™ processor roadmaps, will continue to enhance Intel’s ability to deliver complete hardware solutions with a choice of software platforms across a full spectrum of computing — from back-end servers that power the cloud to the billions of devices that access the cloud.”

More people and devices connecting to the Internet will lead to unprecedented growth in cloud-based services for storage, synchronization and entertainment, according to Maloney, and Intel is poised to grow with it. He said that one new Intel-based server is needed for roughly every additional 600 new smartphones or 122 new tablets connecting to the Internet. He also reiterated the company’s “Cloud 2015” vision of a world of interoperable “federated” clouds that allow enterprises to share data securely across public and private clouds; “automated” networks that allow the movement of workloads between servers in the data center for better utilization and energy efficiency, and “device-aware” clouds that know what types of applications, commands and processing.

In closing, Maloney stressed the critical role of the Taiwan IT industry in the next transformation of computing. He called for collective innovations that will lead the industry into the next era as computing takes many new forms and becomes ever more pervasive and affordable. “The Taiwan IT industry will be instrumental in realizing this vision,” said Maloney.

More information about today’s announcements is available at www.intel.com/newsroom/computex