As for the SU2700, that’s a Pentium ULV chip running at 1.3GHz, and will fall into Intel’s CULV range for thin and light ultraportables.  It might just end up paired with the GS40 chipset, which Intel refer to as “a value chipset”; based on the GS45, it includes the GMA 4500M graphics accelerator with up to 384MB of memory and a 400MHz GPU, integrated Blu-ray HD playback and native hardware HD video stream decoding, and HDMI outputs.

Intel also announced its new My WiFi technology, which allows any recent Intel-based WiFi notebook or netbook to connect to both a WLAN and up to eight WiFi PAN devices simultaneously.  This allows for point-to-point WiFi printing, displaying and synchronizing, without breaking the main wireless network connection.  My WiFi will be supported in Intel’s new WiFi Link 5000 Series, the company’s second-gen draft-n cards for Centrino 2 platforms.  More details here [pdf link] 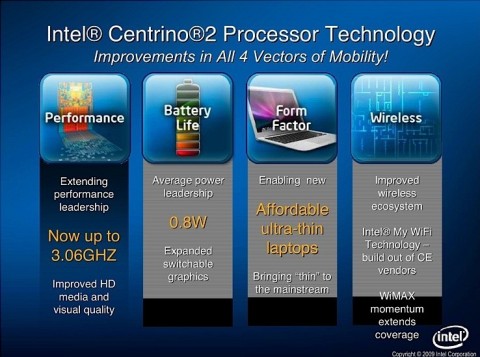