One of the most exciting pieces of wearable tech in recent months has been the WIMM One, WIMM’s hardware developer kit for its wearable Android-based system. We spoke with WIMM Vice President Timothy Twerdahl about the future of wearable tech at the Showstoppers 2012 event at CES, and how WIMM is innovating with its open developer platform.

SlashGear: Do you think 2012 is the year of wearable smart watches?

Twerdahl: I don’t think it’s the year of wearable smart watches, it’s the year of wearable technology. It’s a category that’s broadening rapidly. It starts with the technology that’s close to the body – lots of other countries are starting on this stuff. What makes WIMM different than companies like Sony Ericsson is that we’re developing a completely open platform, then licensing hardware with lots of brands. Later this year you’ll be able to buy a WIMM device from a mobile operator to pair with your smartphone, or a sports company to track your workout.

SlashGear: How many developers have you had so far interested in creating an app for the One?

Twerdahl: The response from developers so far has been tremendous. We’ve got over 2700 developers registered on the portal, and that’s a great start for a platform that isn’t available at retail yet. We’re working on an app store that’s in beta now, and will be available on the web and on the device itself. we’re also working actively with developers to showcase the first crop of great apps.

SlashGear: What is your outlook for the future of the company?

Twerdahl: With WIMM, we develop modules for different manufacturers. WIMM One is for developers. We didn’t want to make a simple SDK or emulator, because that doesn’t give you the full experience with our gesture interface. The WIMM One allows developers to walk around with real hardware. We’re opening it up just a little for consumers, but for now we’re focusing on the developer community.

If you’re unfamiliar with the WIMM One, it’s a tiny Android device powered by a full ARM 11 processor, allowing for some impressive power on a gadget that’s just 1.5 inches square. It connects via WiFi or Bluetooth, and can communicate with Android and Blackberry via an app, and iPhones via the built-in Bluetooth capabilities. The developer kits are $299.99, but hardware developed by WIMM’s partners should be available this year. 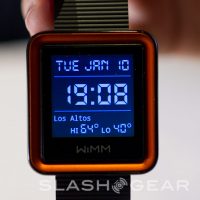 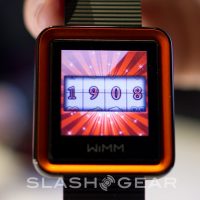 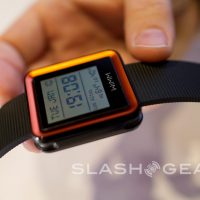