Inside the Cup: Cuphead is a 1930’s cartoon video game come to life

The visionary production known as Cuphead is a video game made by lovers of 1930’s cartoons and hand-drawn, hand-inked artwork. We had a chat with the creators of Cuphead at Studio MDHR, inquiring about their inspiration, their current state of affairs in the gaming industry, and future details on the release of this title.

Welcome to Cuphead, a game that will have you doing a double-take when you first see it, no matter what environment you’re coming from. Be you a hardcore gamer or someone who hasn’t played a video game since PONG, Cuphead aims to capture your imagination, visuals first.

To get a grasp on this game you’ll first have to see some gameplay*. This trailer comes from the Microsoft presentation for Xbox One at E3 2014.

“We have influences from a wide variety of 1930s cartoons: Fleischer, Disney, ComiColor, Van Beuren and more. But the overall ‘feel’ leans more towards the Fleischer Studios spectrum.” Moldenhauer continued, “Cartoons like the below have a lot of intricate details that we can borrow from (eyes, mouths, timing, slight inconsistencies, facial antics, morphing and much more):

You’ll find some visual references in these cartoons to be fairly obvious, while others are very slight. Moldenhauer suggests that they “want to add subtle visual (and non-visual) references to video games and classic cartoons – BUT – we try to stay away from extremely clear references.”

“We hope that it takes some time before gamers find all the winks and nods we have placed in Cuphead (some of these will be VERY subtle).”

References have gone down to the basics – all the way to scanlines and back out to smooth movement. Moldenhauer suggests that “scanlines, chromatic aberration, two color ‘Cinecolor’ mode, and black and white mode” are all included in the game at this time – though we’ll just have to wait and see what’s optional and what’s not. 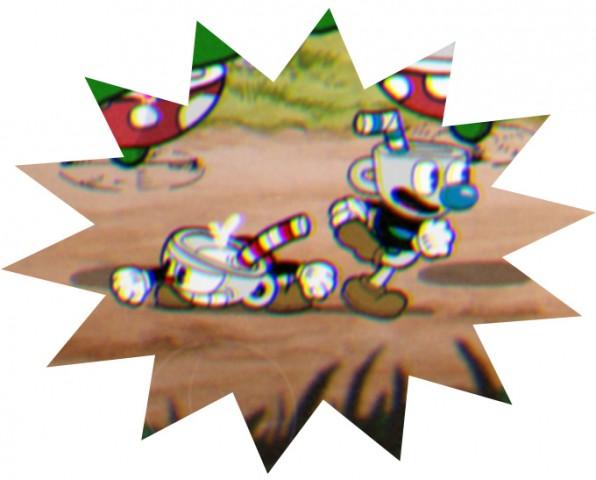 Above you’re seeing Cuphead and Mugman, a couple of fellows that you’ll be controlling throughout the game. You’ll have a handle on one, the other, or both if you’re aiming for multiplayer.

“Because a true run and gun is played with a friend we will have a two-player co-op mode,” Modenhauer assured us. “Cuphead will have both local and online co-op. Local co-op will definitely be at launch, [and] If we have the Power of Grayskull, we will launch with the online mode too – but we can’t guarantee that – it might have to come out a bit later.”

In the game you’re rallying to create a more powerful setup for yourself while you douse your enemy in bullets, beams, and everything in-between. 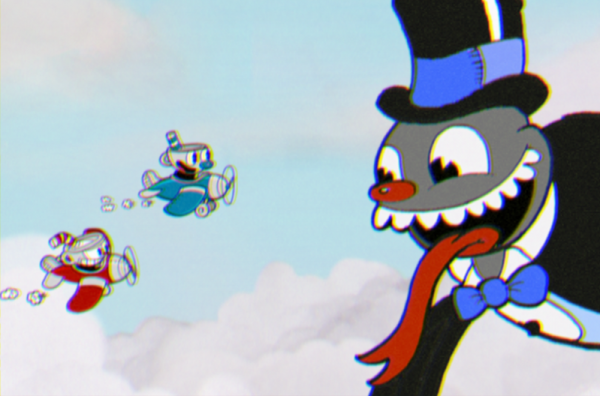 “We are creating a unique super for each weapon in the game. For example, the “Beam” super will hold you in one place for the super duration and, if used right, it can keep you in the air longer and avoid attacks that can’t be jumped over.”

“This allows players to explore different strategies as they learn the functions of a weapon and its super.”

“Cuphead also has Super Mario 3-style power-ups. These are one-time power-ups that you can use before a fight. These power-ups give the player a slight advantage. For example:

• A shield that automatically parries a certain amount of bullets”

Above you’ll see some of the controls as mapped to the wireless controller for the Xbox One. You could also potentially use this controller when you’re playing the game on your PC via Steam.

The following super-short teaser shows one of the bosses you’ll be facing off against. Look familiar to you?

Finally, while it’s been suggested that Cuphead is an Xbox One/Steam exclusive, Moldenhauer suggests that this just isn’t so. “Cuphead isn’t an eternal exclusive,” said Moldenhauer, “it’s [just] launching on Xbox One and Steam first.”

*NOTE: regarding gameplay in the trailer at the head of this article, Moldenhauer had the following to say: “Only the initial shot with the devil is a cut scene, the rest is 100% final gameplay. We’ve tried our best to ensure the game looks like a 1930s cartoon. Hopefully others agree!”

We’ll be checking this game out up close and personal when it’s released later this year. Keep an eye on SlashGear gaming and Studio MDHR for more next-level creations in the near future!