This week we’re having our first real good look at the game known as INJUSTICE: Gods Among Us, a DC Comics beast of a fighting-genre game that’s being released by the same folks who brought you Mortal Kombat. The trailer is showing off not only bits of the timeline included in this alternate universe, but gameplay as well. Every icon from Batman to Wonder Woman, Solomon Grundy to The Flash, and everyone in-between will be here for a massive beat-down festival the likes of which you’ve never seen before.

NetherRealm Studios are bringing what they call a “bold new franchise” to the fighting game genre complete with a “deep” original story that’s also being released as we speak in real-world comic book form. Each of the heroes and villains you know so well have been given “god-like” powers where applicable to essentially equalize their ability to destroy the other. Multi-tiered fighting arenas also make for a gaming experience that no DC comics hero (or Mortal Kombat character, for that matter) have ever been through before.

Writers Justin Gray and Jimmy Palmiotti are behind the wheel here with a storyline made to engage not only game players but the comic universe as well. Iconic battle arenas are pulled directly from the pages of the comics as the storyline inside the game expands the environment created in the comics. With the power of the advanced computing systems inside the PlayStation 3, Wii U, and Xbox 360, you’ll be able to knock your opponents into, through, and completely out of the arenas in which you do battle.

This game is up for pre-order at several locations in the United States right this minute in standard editions as well as Collectors Editions. The Collector’s Edition includes the game itself, a 12-inch statue with Batman and Wonder Woman making with the action poses, and the “INJUSTICE: Gods Among Us” graphic novel. You’ll also get a digital download copy of the DOOM: Justice League movie and three unique and exclusive skins for your characters in-game based on the comic DC COMICS – THE NEW 52. 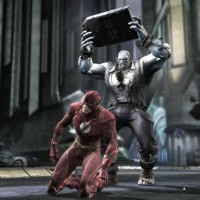