An unprecedented image of a supermassive black hole and its vast extragalactic radio jet has been captured for the first time, raising new questions about our nearest radio galaxy. The heart of Centaurus A – the fifth-brightest galaxy in the sky – is distinguished by a plume of energy moving around half the speed of light, though it’s taken until now, and the Event Horizon Telescope, to visualize it closely.

The Event Horizon Telescope, or EHT, is no single instrument. Instead, it’s an array of radio telescopes around the world, working collaboratively to combine their data for maximum results. It’s the tool by which researchers imaged the huge Messier 87 black hole; more recently, it turned its collective attention on Centaurus A.

The data – gathered from 2017 EHT observations – has resulted in an image at ten times the frequency and sixteen times the resolution of previous observations. It’s a magnification factor of one billion, the EHT team says, enough to answer some old questions – and to raise some new ones.

The jets from supermassive black holes are effectively near-misses in the ongoing meal. Usually, the huge gravitational pull drags any gas and dust nearby into the black hole; however, some small percentage can escape just before being pulled in. Instead, they’re blown out to huge distances and at vast speeds as jets. 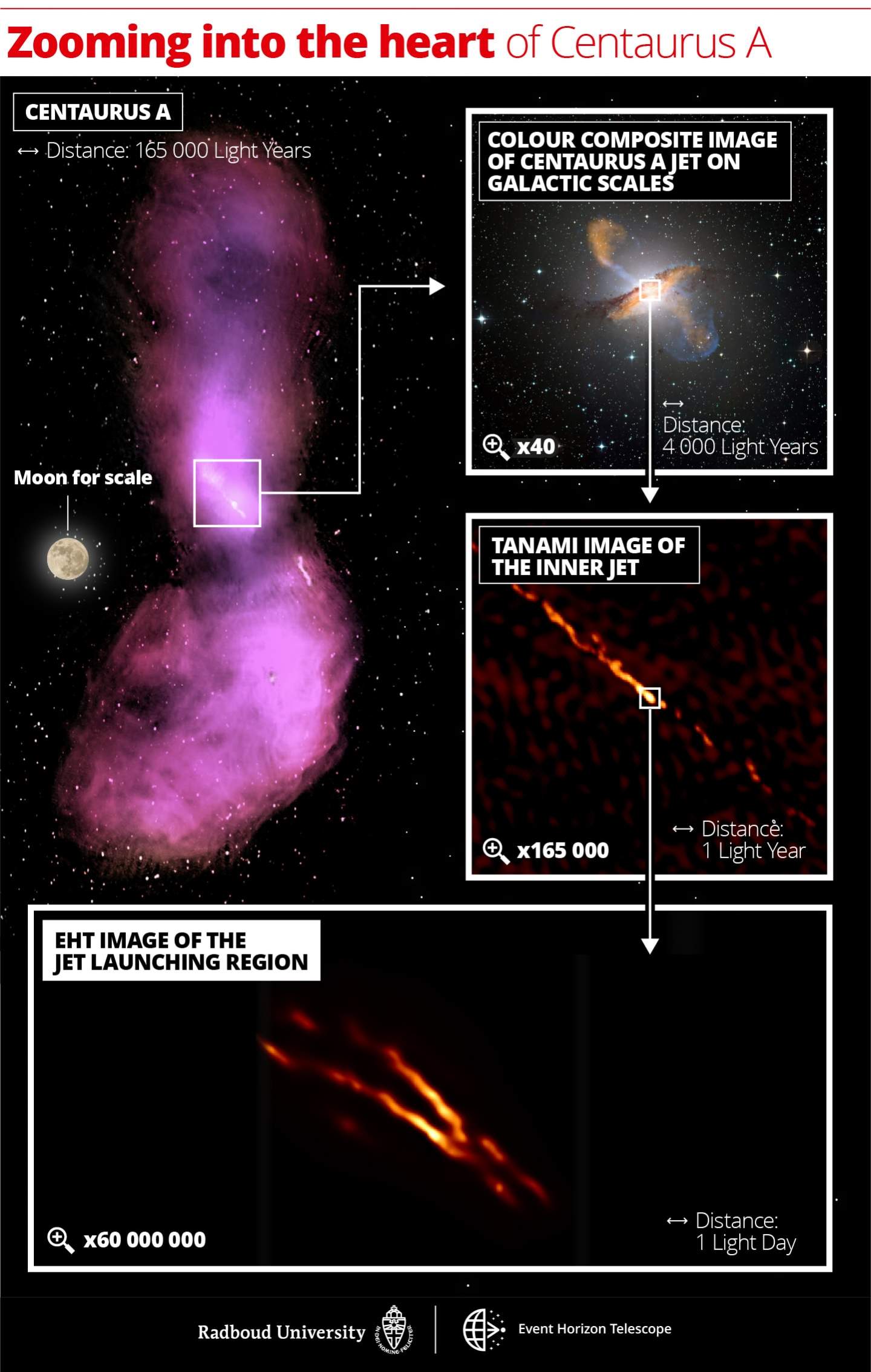 While they may be known about, jets are barely understood. There are multiple models that attempt to explain just how they actually form, but the EHT’s new Centaurus A observations help pinpoint the likely location of the black hole at the launching point of the jet. While the central black hole itself would require greater magnification still to properly image, even what the telescope array has achieved now is enough to discount some of the models.

For example, the jet’s edges are distinctly brighter than its central portion. “Now we are able to rule out theoretical jet models that are unable to reproduce this edge-brightening,” Matthias Kadler, TANAMI leader and professor for astrophysics at the University of Würzburg in Germany, explains. “It’s a striking feature that will help us better understand jets produced by black hole.”

At the same time, though, the EHT’s observations do pave the way to some new uncertainties. Only the outer edges of the jet appear to emit any radiation, for instance, which runs counter to some of the core understandings of the phenomenon.

To get closer insights, however, we may need a different type of instrument altogether. Although it’s believed that even shorter wavelengths, and higher resolution, could capture Centaurus A itself, “this will require the use of space-based satellite observatories,” the EHT team suggests. A paper on the new findings has been published in Nature Astronomy today.