Inbrics M1 MID gets CPU bump, is a smartphone lover not a fighter

Inbric’s M1 MID certainly got the geeks talking when it was announced late last year, but after a successful CES showing the Android-based device has seemingly gone into stealth mode.  NetbookNews decided to storm the Inbrics HQ in Seoul to find out where the project is up to, and it turns out the M1 has had one or two updates since we saw it last.  Chief among those is a processor boost, with the M1 MID now running at 1GHz thanks to a Samsung C110 CPU of the same family that you’d find in the iPhone.

Unfortunately, the other piece of hardware news is that, despite how the M1 looks, it’s definitely being positioned as a MID rather than a phone.  That means no integrated 3G, at least not for voice-calls; Inbrics are apparently considering a data modem, but this is intended as a companion device rather than a replacement for your smartphone.  The microphone and earpiece are intended for VoIP use, which you’d presumably do over the M1’s WiFi connection.

As a second device we’re not sure whether the 3.7-inch AMOLED touchscreen is large enough to tear people away from something like the similarly-specified Google Nexus One, though NetbookNews do say the M1’s five-row hardware keyboard is particularly good.  Inbrics are still looking to pick up a big name brand or two to offer the M1, though they expect to launch in Korea come July and in the US by the end of the year. 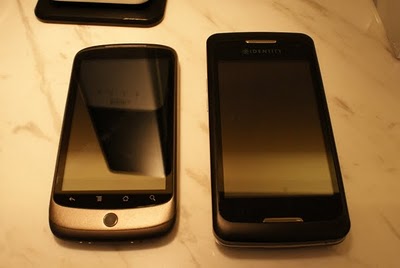