Inbox by Gmail invites sent out this morning [UPDATE]

Starting right away this morning you’ll find that Inbox by Gmail invites are being sent out to the masses. If you’d been on the wait list, you might very well be in right this minute. If not, you’ll be invited very, very soon. This goes for Android and iOS users as the invites are not OS-centric. Inbox is a setup that works cross-platform, be it on your web browser or your iPad, your Android tablet or your Android smartphone the same.

Those of you that’ve signed up with Inbox by Gmail through their inbox (at) gmail (dot) com email address, you’re probably already ready to go. Two waves of invites have been sent since late last night.

You can get on the web browser console through inbox (dot) gmail (dot) com, while the iOS and Android apps can be found in their respective app stores under “Inbox by Gmail” in both cases.

Above you’ll see our basic hands-on with Inbox for Gmail using an NVIDIA SHIELD Tablet. It’s basic. It keeps your email separated and super-simple to work with. And it works extremely well – for Gmail. If you’re using a different service, you’ll have to make it forward to Gmail, then use that Gmail account. Easy enough. 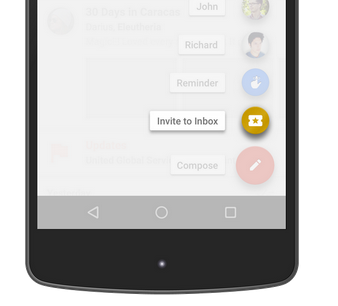 UPDATE: Invites are now being sent out to those that already have Inbox, allowing them three invites of friends. Let us know if you want one with @slashgear now!