While the iPad 2 is undoubtedly a slick piece of hardware the real magic is in the software, and apps like iMovie for iPad do a great job of demonstrating that. Unfortunately, Apple has decided that first-gen iPad owners can’t share in the iMovie goodness, which is a red-rag to the iOS hacking community. They’ve come up with a method to install iMovie on the original iPad, though right now it’s not entirely polished. 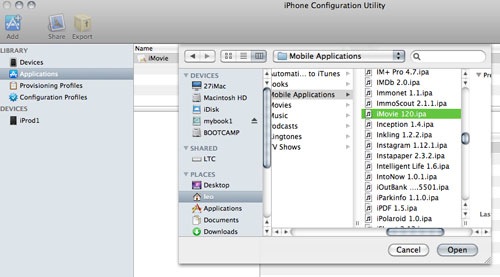 You’ll need the newest version of the iPhone Configuration Utility (available for Mac and Windows) and then to install iMovie manually from the Applications menu on the left hand side. Click to open iMovie first, then hook up your iPad and hit install. First impressions are apparently that, despite having a single-core Apple A4 processor and half the RAM, the original iPad still does a decent job at running the software.

Unfortunately, iTunes isn’t keen on you keeping iMovie on the slate, and will do everything it can to get rid of it. Try to sync your iPad subsequently and you’ll get an error message saying your computer isn’t authorized for apps on the tablet. Clicking “Authorize” simply brings up the error message again, clicking “Don’t Authorize” deletes iMovie and clicking “Cancel” leaves things as they are, until you want to install a new app. Then you get the same problem again. We’re guessing an unofficial fix is being fathomed now.