Today we’re having a look at the newest edition of Apple’s basic video editing software, that being OS X Mavericks’ own iMovie 10.0. With the release of OS X Mavericks comes the “free” generation of Apple-made software, and both iLife and iWork coming to the public without cost – with new machines, that is. Here we’ve also got a transformation, no of cost, but of usefulness for the iMovie console.

This version of iMovie is a transformation of the software from a video editing app to a video home base. Here you’re as much encouraged to use iMovie as your one-stop-shop for all things video as you are encouraged to use it for video editing. One key point in this transition is the addition of a “Theater” mode, but even the main Library mode has you looking at your videos without the necessity of editing.

Another key indicator of change in this software is the axing of the “Export” element. Here instead Apple chooses to direct you toward the “Share” button – sharing as a File, as it were, replaces the “Save As” as such. With this change also goes the removal of Export to Quicktime – also an indicator of things to come for Apple’s extended software suite. 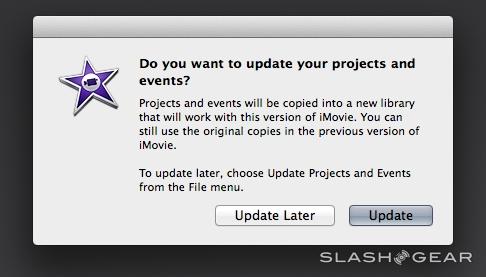 This change also kicks out support (at least at the start, here,) of support for such devices as Elgato. We’re confident this is only a momentary set-back, but for now, you’ll need to use Elgato’s separate software suite rather than just exporting using Elgato through iMovie.

The iMovie universe now exports to Email, YouTube, Facebook, Vimeo, CNN iReport, and File. You’ll also have the option to export to your “Theater”, an element that we imagine Apple will have some ramping-up to do before users understand the benefits of. For now you’ll just be treating it like the edited collection of videos you’ve go ready for the Cloud, where the Library is just every video you have in its rawest format, straight from the camera. 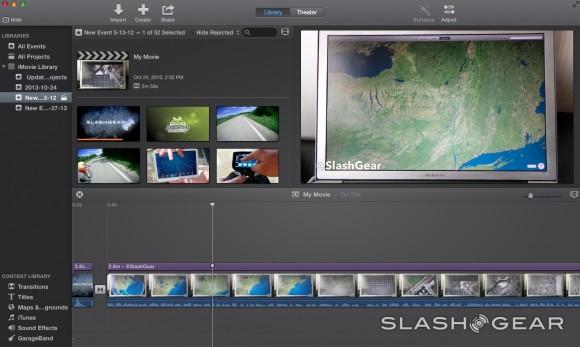 You’ll also be given a few new oddities – there are more sound effects in this version than ever before, for one. This is a collection of extremely professionally created sound effects made just for this app. Another addition is the Indiana Jones map collection – it’s not actually named after the Spielberg collection of films, but it may as well be: you get control over the locations, too.

This version of iMovie takes on essentially everything offered up in previous editions and packages it up in a newly simplified format. With iMovie 10 comes the transition away from an editing suite and toward a do-all movie hub for Apple computers. The same is true of iMovie on iOS, an app that appears nearly identical to the desktop software – save the processing power the desktop version still holds over the mobile iteration. 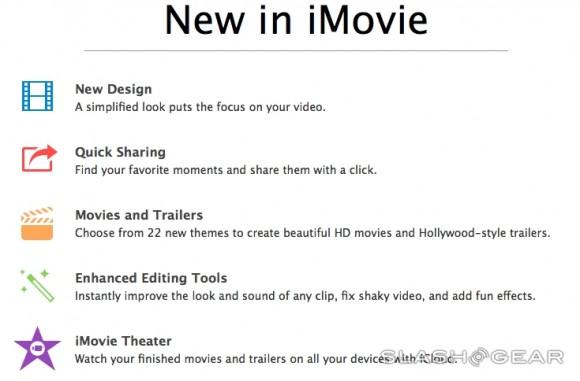 Have a peek at the rest of our recent coverage of the iLife and iWork suites for OS X Mavericks and iOS 7, and be sure to stay tuned for an extension of our MacBook Pro (late 2013) hands on in the form of a full review!