Kia promised something that would get the heart racing at the Geneva Motor Show 2019, and the Imagine by Kia concept is the all-electric vehicle it thinks can achieve that. First four-door sedan to use an electric-only drivetrain from the automaker, the Imagine concept previews not only Kia’s future focus on EVs, but some of the design language it plans to wield in the process.

It’s not quite a sedan, but then it’s not an SUV or a crossover, either. Kia says that it intentionally positioned the Imagine concept somewhere in-between the three. “It hints at something familiar, but is something entirely new,” Gregory Guillaume, Vice President of Design for Kia Motors Europe, said of the car. “I think of it as a category-buster, and a disruptor – it’s familiar and understood but at the same time progressive and new.” 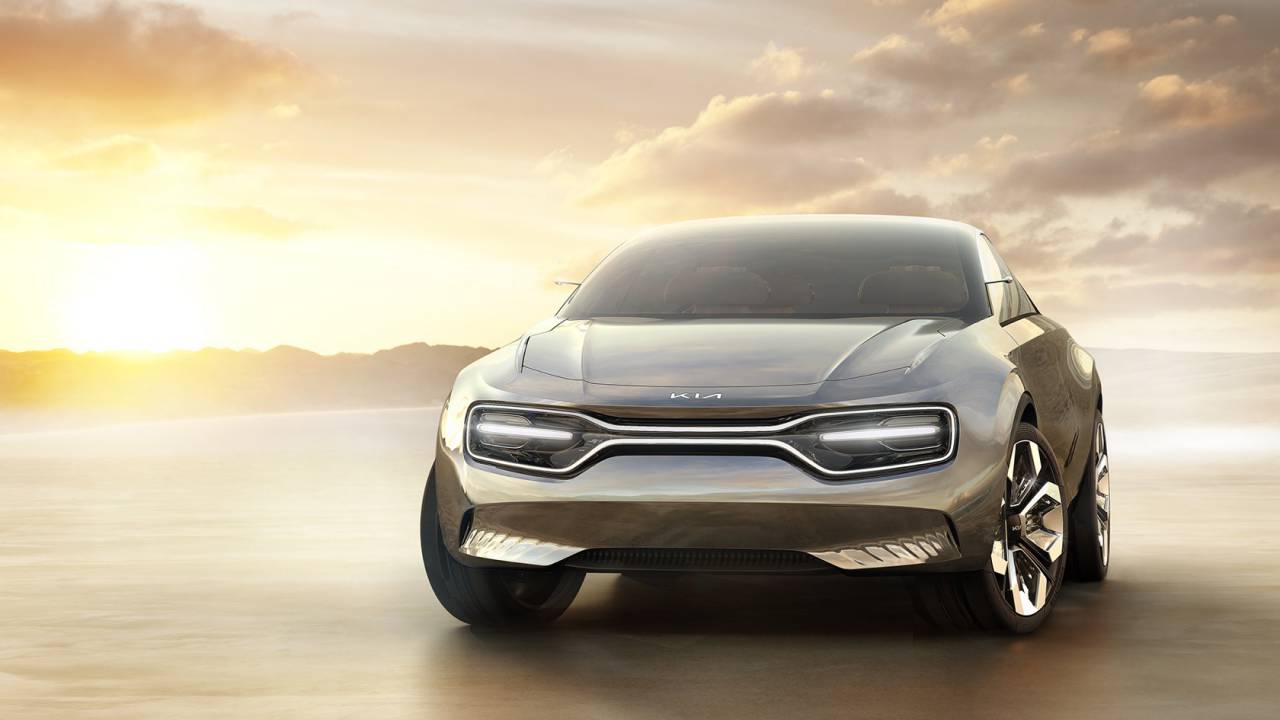 Most noticeable is the front grille and lighting treatment. Kia’s “tiger nose” has had a makeover, with a new illuminated “tiger mask” which extends to encompass the main headlamp units. Dipped and main-beam clusters are embedded in a single block of clear acrylic glass, separated by what the automaker describes as horizontal “eyelids.”

The front air-curtain, along with the flanks of the car, meanwhile, get molded ripples. Each is different – a difference length and a different angle – so that they pick up the light differently. Guillaume says that’s meant to give the car the look of something moving, even when it’s parked up. 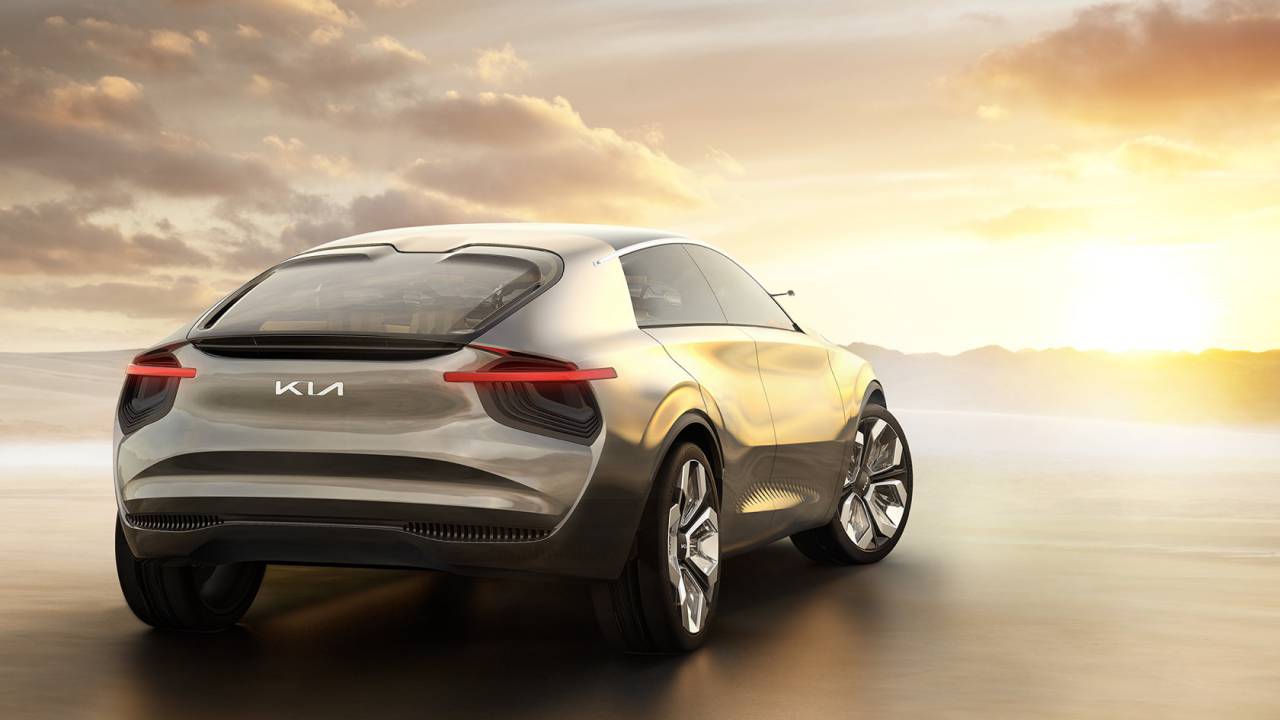 As for the paint, that’s six hand-applied layers of chrome-effect silver, topped with a tanned bronze tint. A single piece of glass starts out at the base of the windshield and then arcs up, over the top to create a huge moonroof. That then tapers to a double-bubble atop the rear seats.

Kia’s detailing helps make the car a visual success. The side turn signals are integrated into the side streaks, for example, while the front signals are mounted high on the hood and are made up of glowing elements embedded in clear acrylic. At the rear, the turn signals are housed in tunnels, with looped lights that extend out as they grow. A Stinger-style horizontal brake light strip finishes things off. 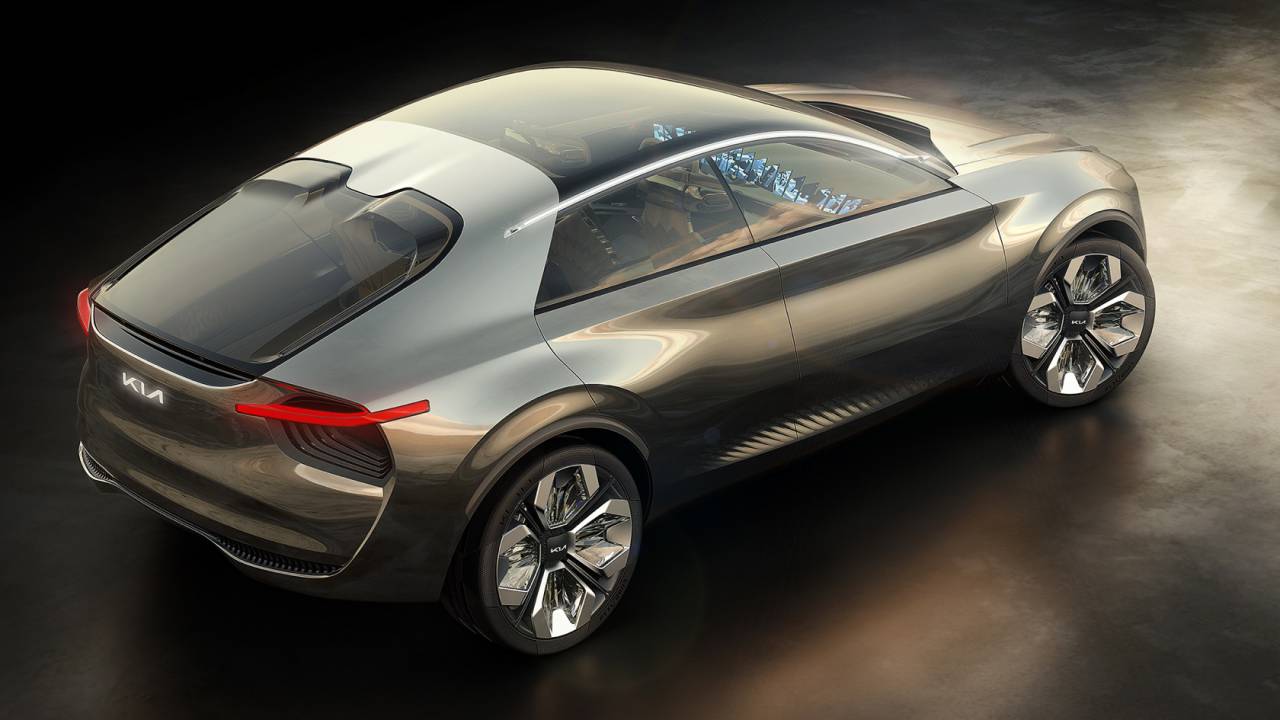 Acrylic makes another appearance on the 22-inch alloy wheels. There, Kia has added four flush inserts to each wheel, with a polished finish at the front and diamond cross-cut at the back. They’re then shod in bespoke Goodyear 255/35 R22 Intelligrip EV concept rubber.

Aero has been a key area of focus, the Kia design team aiming to cut drag and maximize the EV range. That comes from a custom electric drivetrain, with a low-mounted, induction-charged battery pack and a compact electric motor. 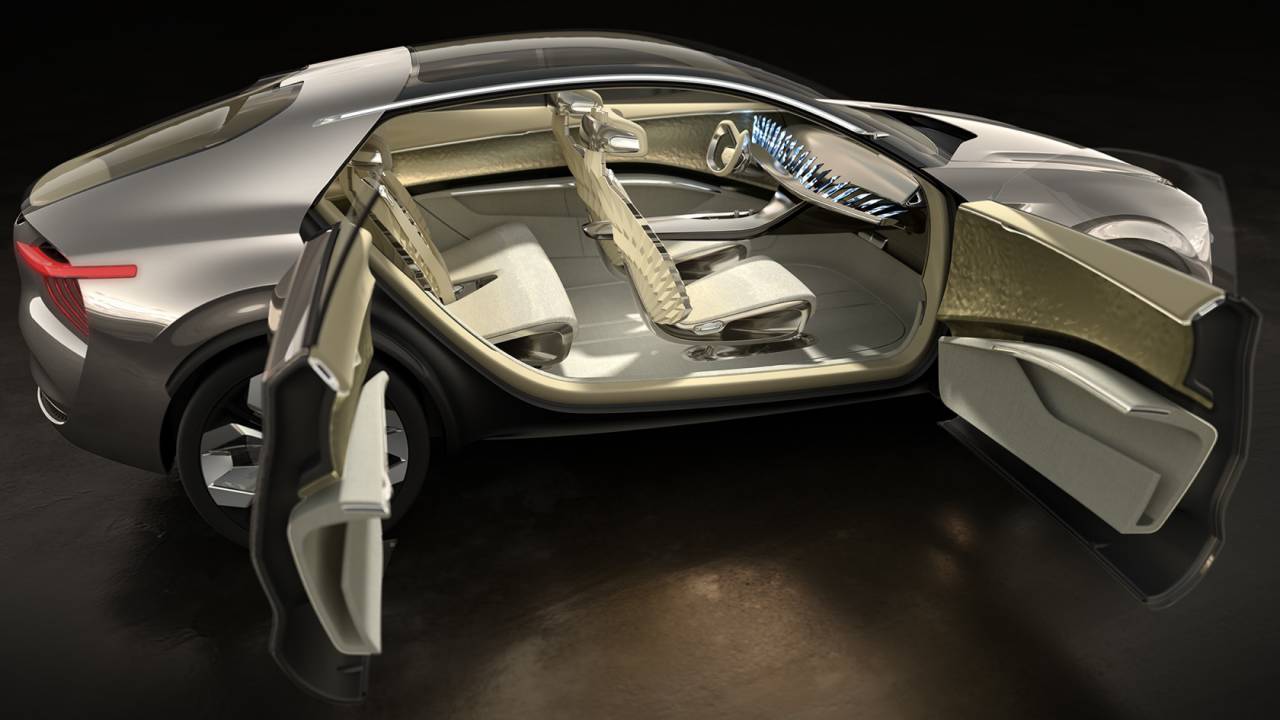 Inside, Kia has gone a little screen crazy. A full 21 individual, ultra-high-resolution screens curve across the dashboard as if in a wave. From the point of the view of the driver, they blend together into a single panel, but they also allow the automaker to make a joke about the bigger and more numerous displays in its rivals’ vehicles.

It’s not just driving information, multimedia, HVAC settings, and navigation that they can show, mind. Kia says the screens will also show a rotating gallery of former concepts from the company, as a reminder of what brought it to where it is today. 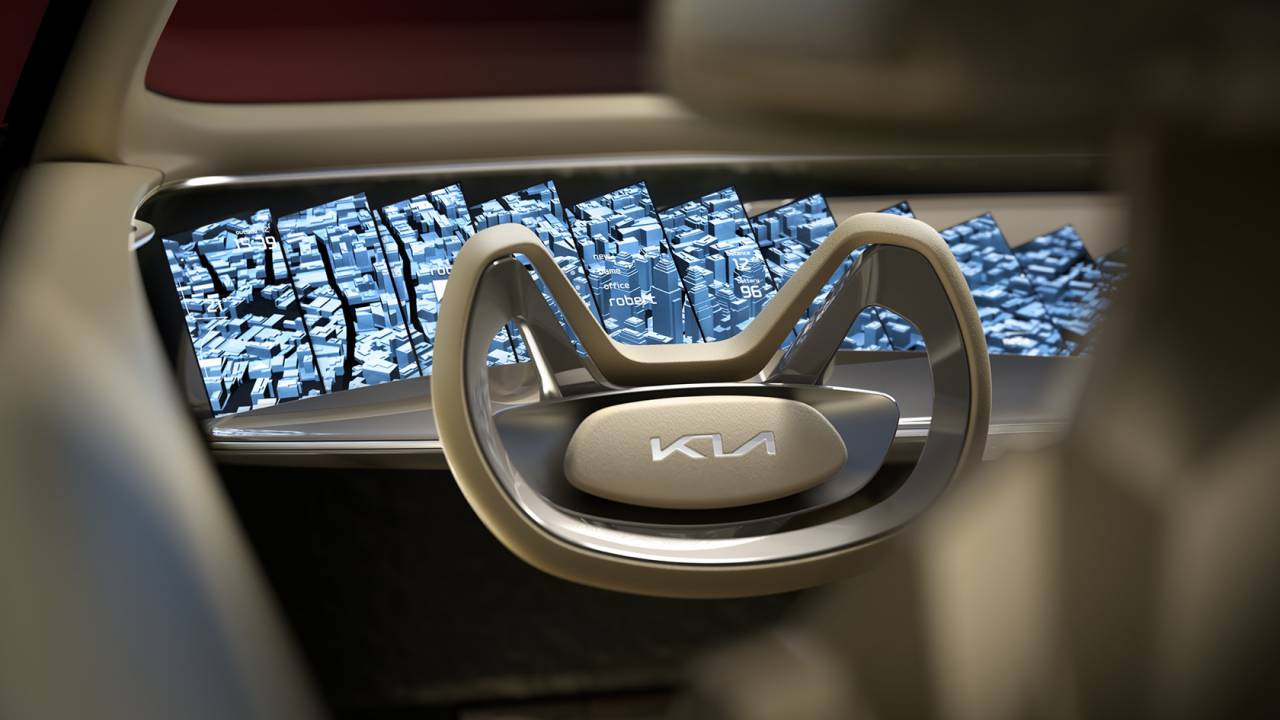 In contrast to the displays, the Imagine concept’s leather and silk-trimmed seats – with diamond cross-cut shells – look almost ordinary. Metallic fabric and leather cover the inner doors, and there’s similar trim on the floating center console. The steering wheel and pedals retract out of the way when the Imagine concept is stationary.

While the design is likely to be divisive overall, that doesn’t appear to be something Kia is shying away from. The automaker’s goal, after all, is to bring some emotion into EVs: even if that reaction is negative, at least it’s better than viewing a car as little more than an appliance. 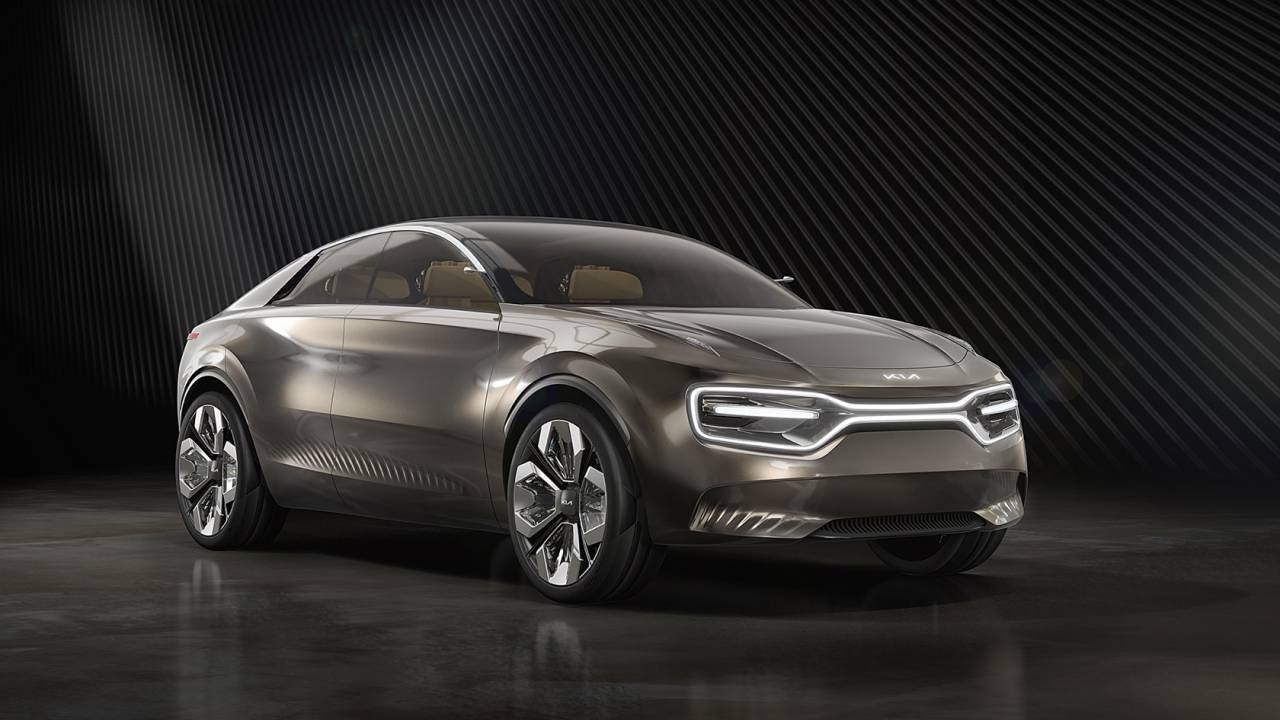 While the Imagine by Kia won’t be built, at least not as far as Kia is saying now, elements of it will follow on future production vehicles. Kia is dropping heavy hints about the lamp cluster designs, for example, along with the new Kia script for the illuminated hood badge.