Weird new Kia EV has a Stegosaurus dashboard of 21 displays

Concept cars aren’t usually afraid of excess, but the cabin of Kia’s upcoming Geneva Motor Show 2019 debut takes that idea to extremes. The new Kia all-electric concept has a fairly sensible ethos at its core – demonstrating that EVs needn’t be dreary – but then opts for a very surprising interior.

“When they talk about their electric cars, many carmakers promote the same empirical data-driven messages as they do with their internal combustion engined cars, such as range, economy and performance criteria,” Gregory Guillaume, Vice President of Design for Kia Motors Europe, explains. Instead, the currently-unnamed concept car is designed to tickle your emotions instead.

It’s a four-door EV, and as such the first purely electric vehicle of that body style that Kia has designed. However it doesn’t fit easily into the sedan segment. Instead, the automaker says, it was intentionally created to span different categories.

That includes a family sedan, but also “a muscular sports utility vehicle” and “a versatile and spacious crossover,” Kia argues. We’ll have to reserve judgement there until we see the whole car, of course. That will be revealed in Geneva next week. 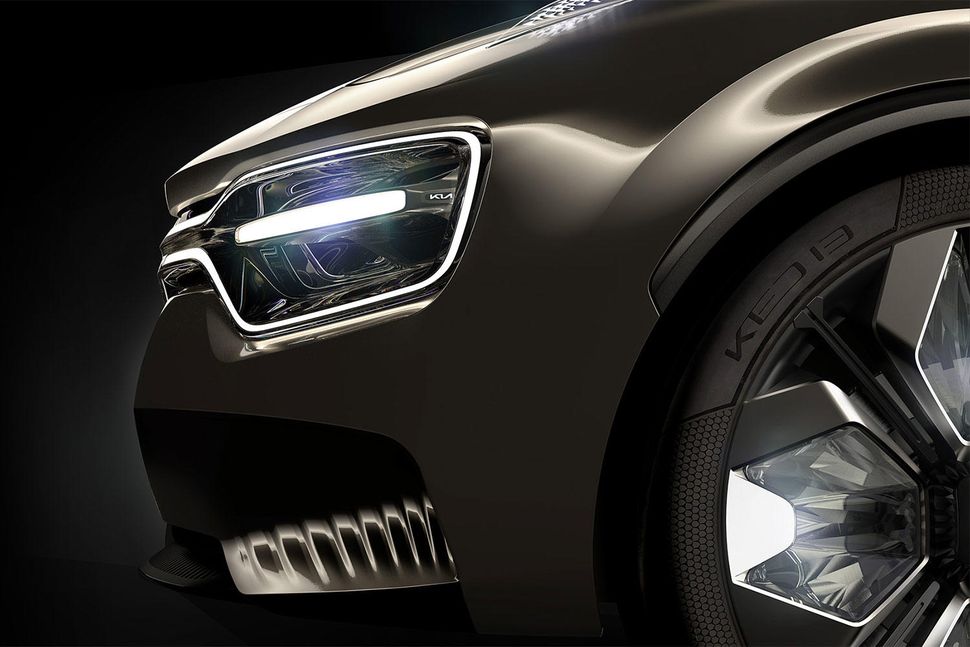 However, what we’ve seen already suggests some key Kia design themes have been given a makeover. The “tiger nose” grille evolves into a “tiger mask” that encircles the headlamps, for example. Kia says that’s meant to give the car a unique – and uniquely recognizable – look from the front.

The windshield flows into the roof, a single sheet of glass arching up and then tapering into a double-bubble atop the rear seats. High shoulders and a narrow glasshouse should leave it looking suitably aggressive.

It’s inside where things get a little weirder. On the one hand, the electric architecture means fewer intrusions into the cabin: that can be left airy and spacious. However Kia then fills it up with displays.

There are a full 21 individual, ultra-high-resolution screens that are fanned across the dashboard. Described as “a humorous riposte to the industry’s current obsession with ever increasing dashboard screens,” they seemingly display drivetrain data and more. Physical controls look to be limited to a cluster of levers in the center console, and perhaps some touch-sensitive buttons on the heavily-stylized steering wheel

Joke or not, it’s definitely a striking look. Kia will reveal the rest of the car next week at the auto show, and we’ll be there to see if the rest of the design lives up to the hedgehog-esque dash.