I’m fascinated by the McLaren Artura hybrid – This is why

We’re a long way from “hybrid” automatically meaning “Prius,” but cars like the new McLaren Artura still have something to prove. Meaningful electrification in the sports car segment is a tough balance to strike: e-motors have clear advantages when it comes to delivering instant torque, for example, but bring with them their own weight and bulk headaches. They’re two things most performance car-makers would prefer to avoid.

It’d be easy to take the old-school purist stance, then, and bluntly insist that a supercar needs to be a gas-guzzling internal combustion beast in order to befit the name. However Artura is arguably McLaren at its most, well, McLaren: engineers setting themselves a challenge, and then figuring out alternative ways to go very, very fast.

McLaren is no stranger to electrification

You’ve been able to buy electrified McLaren models before, you just needed to be exceptionally wealthy and very lucky. Cars like the McLaren P1 have demonstrated that the British automaker was taking hybrids seriously since the early 2010s, it just only produced them in vanishingly small amounts. Even if you had the $1.15 million for a P1, McLaren only built 375 of them, and only a third of those were made for the US.

Kicking off at $225,000, then, the Artura almost seems like a bargain, and – though McLaren is still far from a volume producer – it’s definitely going to build more of this hybrid than it did of the P1. 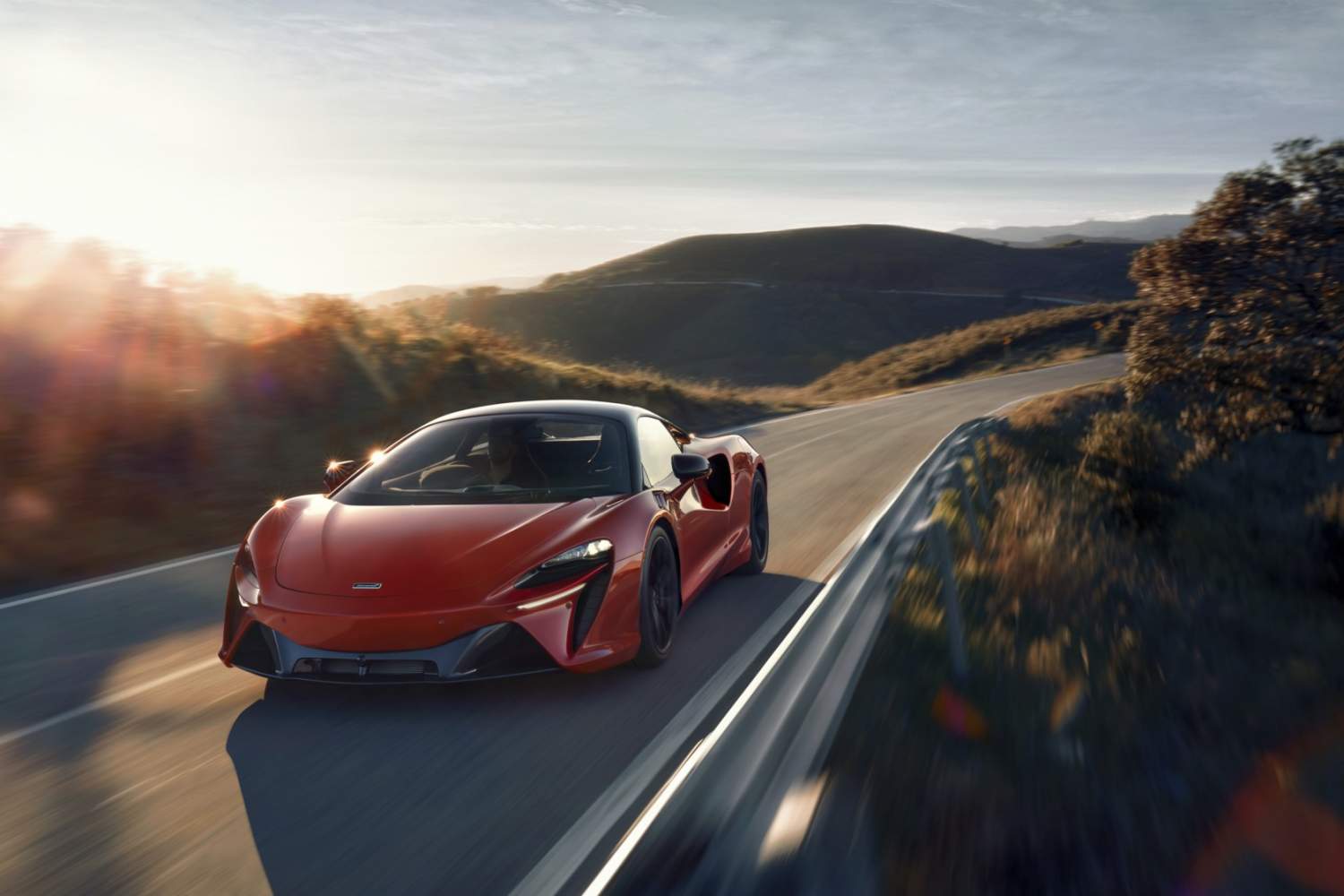 Electrification tech has moved on since that seven-figure hypercar, of course, and the Artura benefits from those advantages. The Axial-flux e-motor – used for the first time in a McLaren – is half the weight of the motor used in the P1 or the Speedtail. However its power density is a third higher.

It’s positioned between the engine and the transmission, which means there are no gears or shafts to either sap power or increase extra weight. In total, the 34 pound e-motor only contributes up to 94 horsepower and 166 lb-ft of torque on its own, but it’s when that happens that’s most important.

The new 3.0-liter V6 gas engine is, obviously, physically smaller than the V8 engines familiar from the rest of McLaren’s line-up. It’s about 110 pounds lighter, but also lower and 7.5 inches shorter. McLaren fit the turbos within the 120-degree vee of the cylinder banks, for instance, trimming 1.6 inches in height versus the V8 in the 720S. 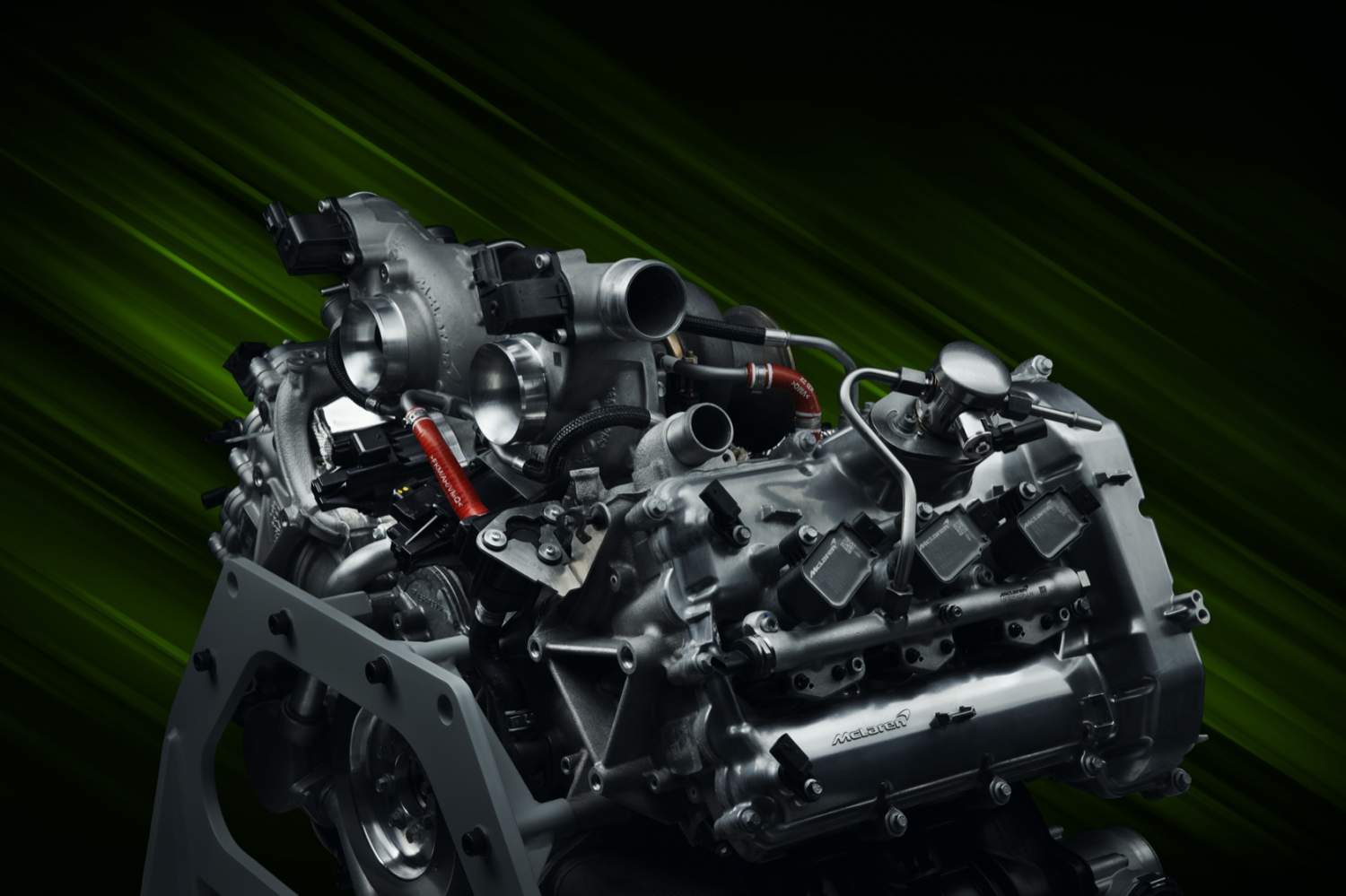 You can think of the e-motor as supplying torque in-fill. Overall, the Artura boasts 531 lb-ft to play with, but the two different drivetrain components supply it differently.

For the V6, peak torque doesn’t arrive until just over 2,000 rpm. The e-motor, though, delivers all its torque from the get-go, though it begins to tail off from around 2,500 rpm. The result is an overlap of the two, with the electric side filling in the gaps and then handing over to the gas side. 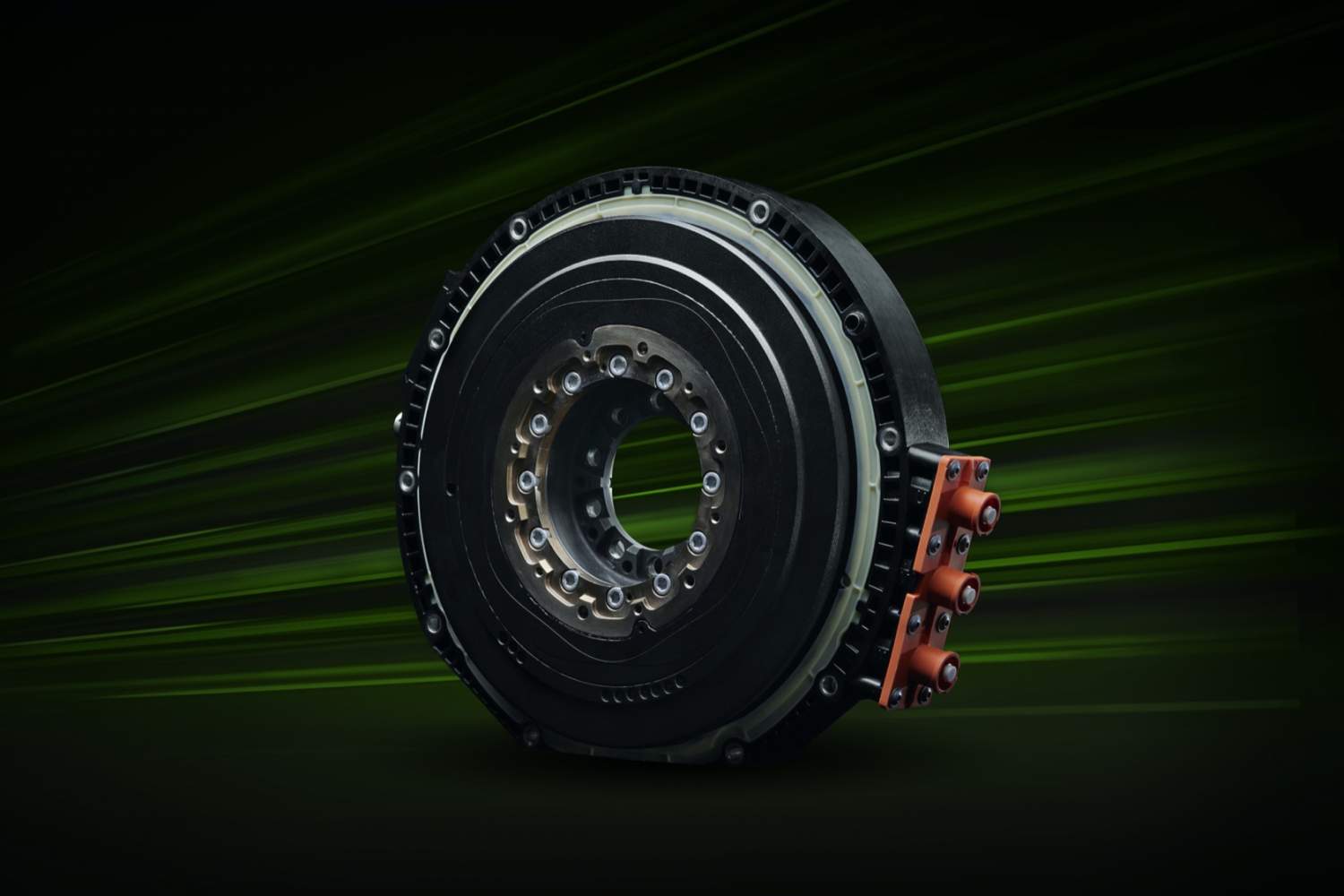 Meanwhile some of the most engaging elements of previous McLaren models have been preserved. The Artura’s V6 is a high-revver, for instance, with the redline at 8,500 rpm.

A silent McLaren – or a screamer

Current McLaren models split the drive modes out into powertrain and chassis, with switches on the dashboard to adjust them individually. Artura puts its Active Dynamics buttons and controls on column-mounted switches, but the principle is much the same. Only, this time around, there are EV modes to play with. 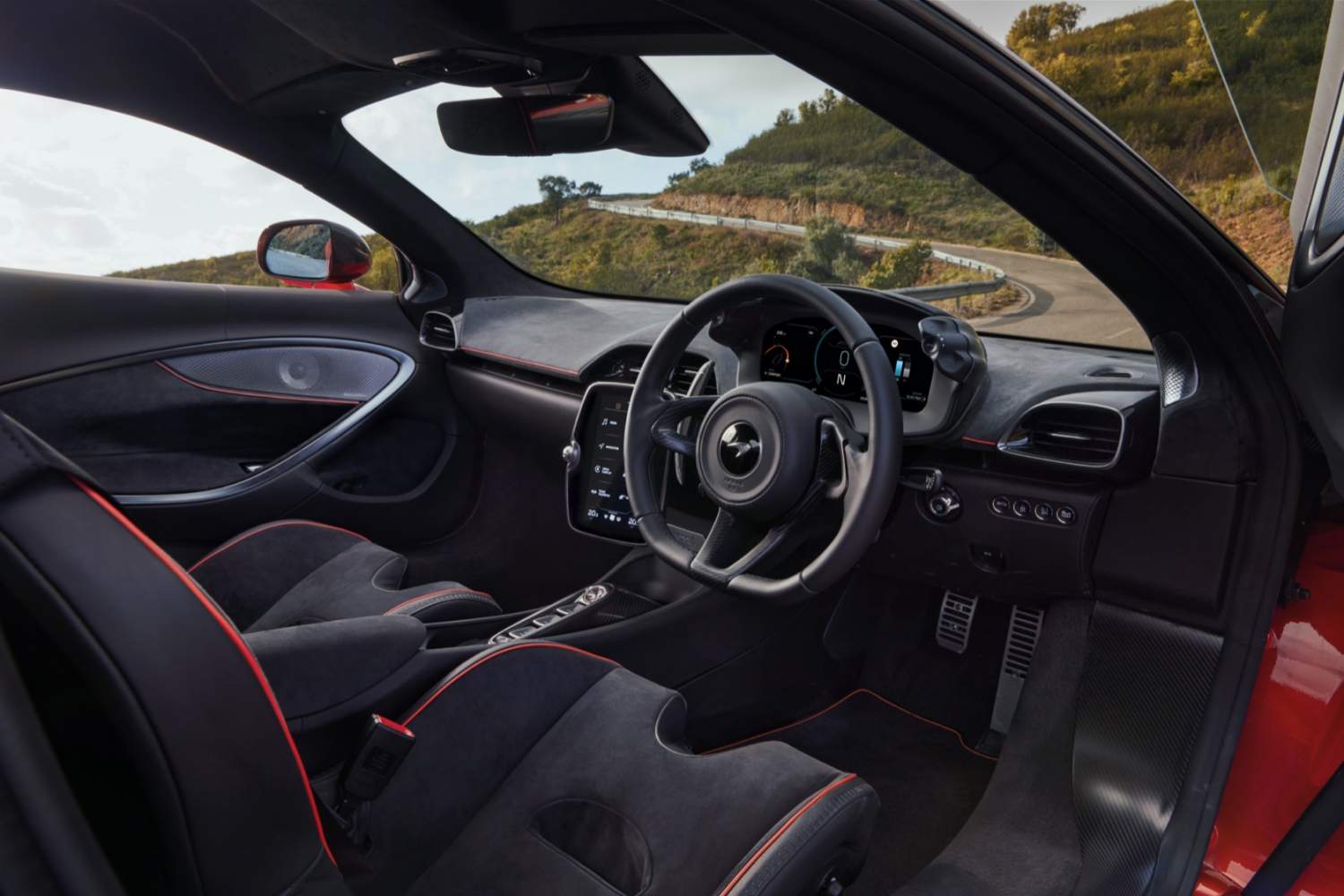 The “All Electric” mode is, obviously, brand new. It prioritizes electric-only driving, with McLaren suggesting you’ll get up to 19 miles from the 7.4 kWh battery (on the WLTP cycle, at least; EPA figures aren’t known yet and will almost certainly be a little lower).

“Comfort” mode blends the two for daily-driving. It extends the stop/start system, cutting out the V6 at low speeds: above around 37 mph and the gas engine will be on, but then it automatically shuts off again when you drop below around 25 mph.

“Sport” mode is designed to be more engaging, making more use of electric power with less of a mind toward efficiency. Finally, there’s “Track” mode, which is optimized for the most effective speeds on the track. As you escalate through the modes the aggressiveness at which the Artura pushes power back into the battery cranks up too, so that you’re never left lacking when you want peak performance. 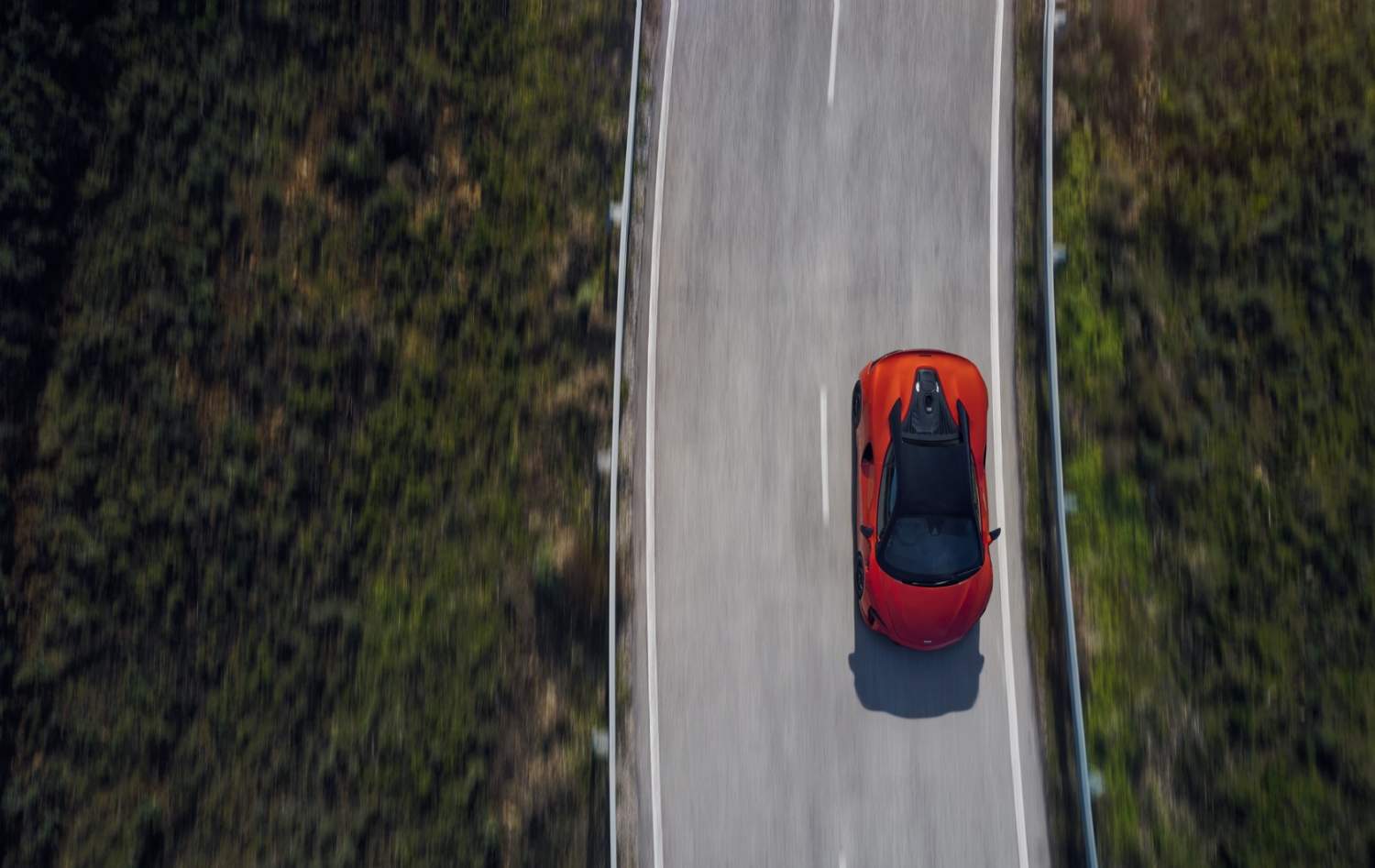 Of course, you can always plug the coupe in to charge. With a 3.3 kW AC connection, you’re looking at 0-80 percent in about 3.5 hours. The battery pack itself is fitted underneath the seats, with McLaren designing the Artura’s monocoque so that it’s actually part of the battery enclosure. The floor of the battery pack completes the structure of the car, in turn, increasing the strength of the passenger compartment, particularly in the case of side-impacts.

Artura is the smartest McLaren yet

There’s smart you can see, and smart behind the scenes, and Artura has plenty of both. The cabin gets a redesign compared to what we’ve seen before in McLaren models. Not only are the Active Dynamics controls now shifted up to the cluster, there’s a new 10-inch HD instrument display that moves as you adjust the steering column. 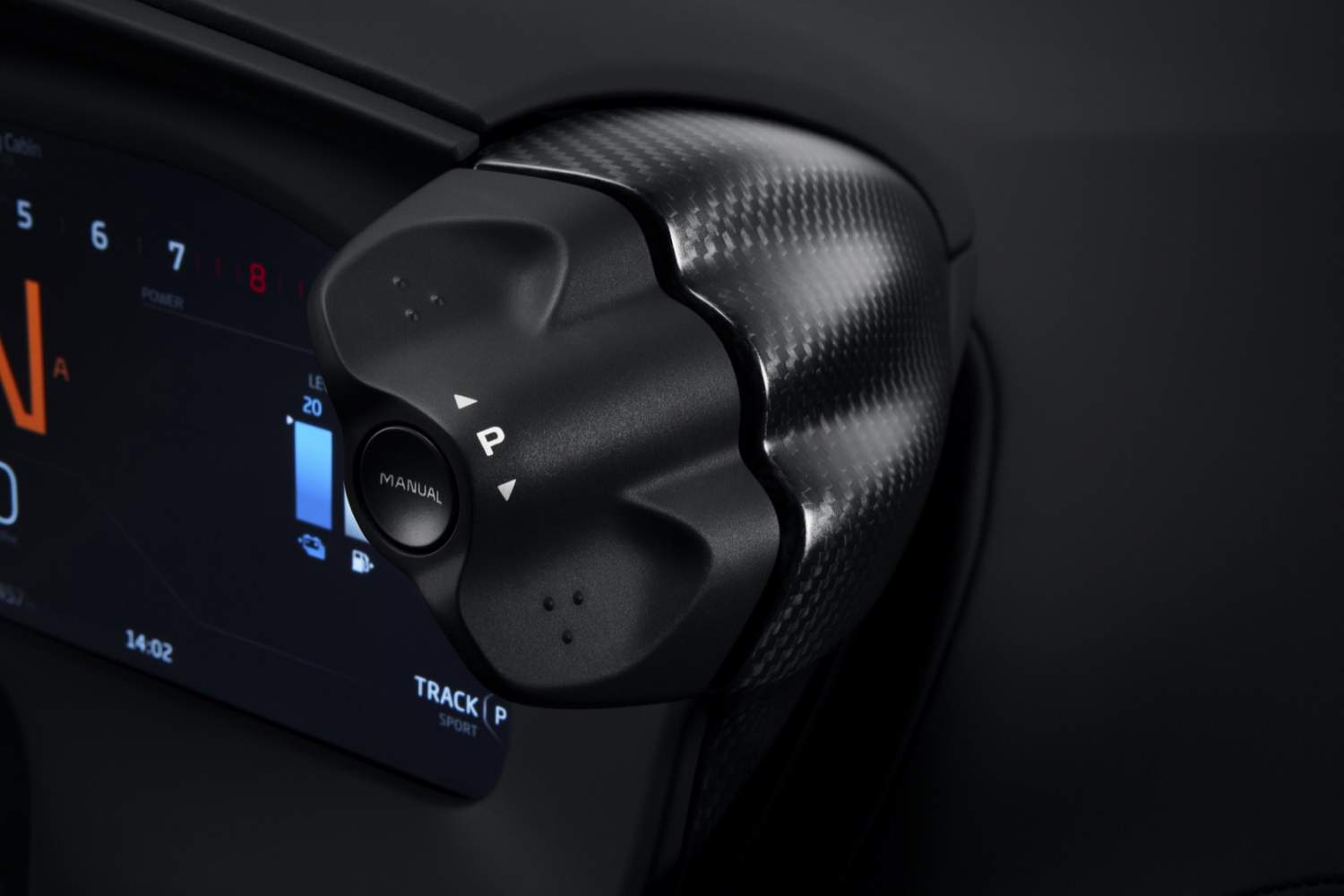 Running behind all that, though, is a completely new ethernet-based electrical system. Replacing the old CAN system, it’s faster, more flexible, and – importantly – lighter, too. In fact, it trims 10-percent of the heft of the old wiring loom used in the 720S.

There are fewer domain controllers too – four now, in Artura, versus 12 in the 720S – and about 70-percent of the key modules support over-the-air (OTA) updates. McLaren says it basically leaves the Artura’s active safety systems alone, but anything else will be fair game for new software pushed out wirelessly to the car.

Also wireless are the tires. McLaren worked with Pirelli on its new Cyber Tyre technology, which bakes Bluetooth LE sensors into the inner liner of each. That allows them to report back temperatures and pressure measurements both with more accuracy and with more frequency. In “Track” mode, drivers can even specify their preference for tire temperature.

The Artura is just the start of McLaren’s EV reinvention 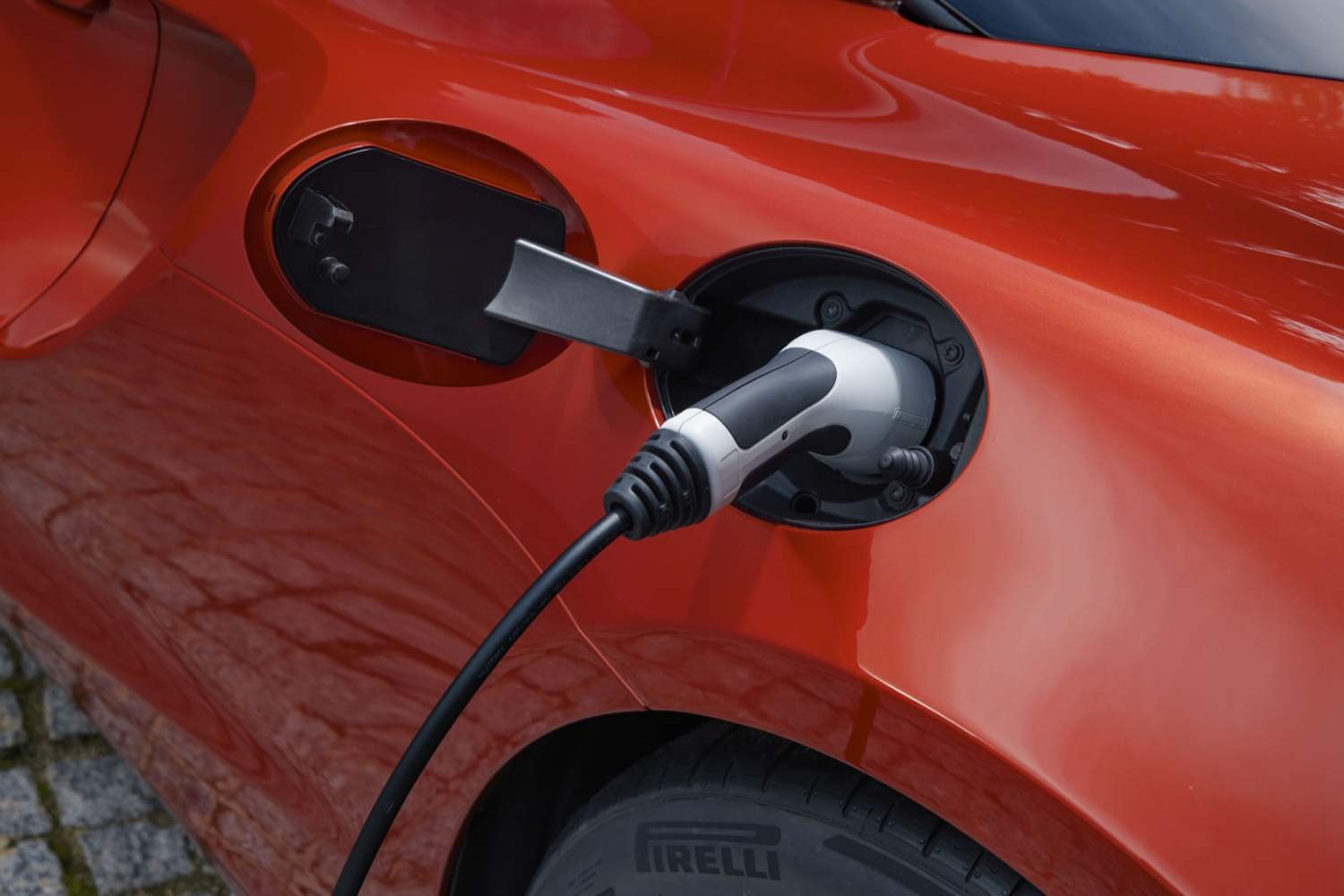 Supercar-makers can’t afford to be left behind, and the allure of instantaneous electric torque and neck-snapping acceleration mean electrification is a matter of “when” not “if” for everyone in the industry. Artura may not hide its EV components – you can still hear the e-motor in “All Electric” mode – but they’re going to shift even further to the fore come future models. 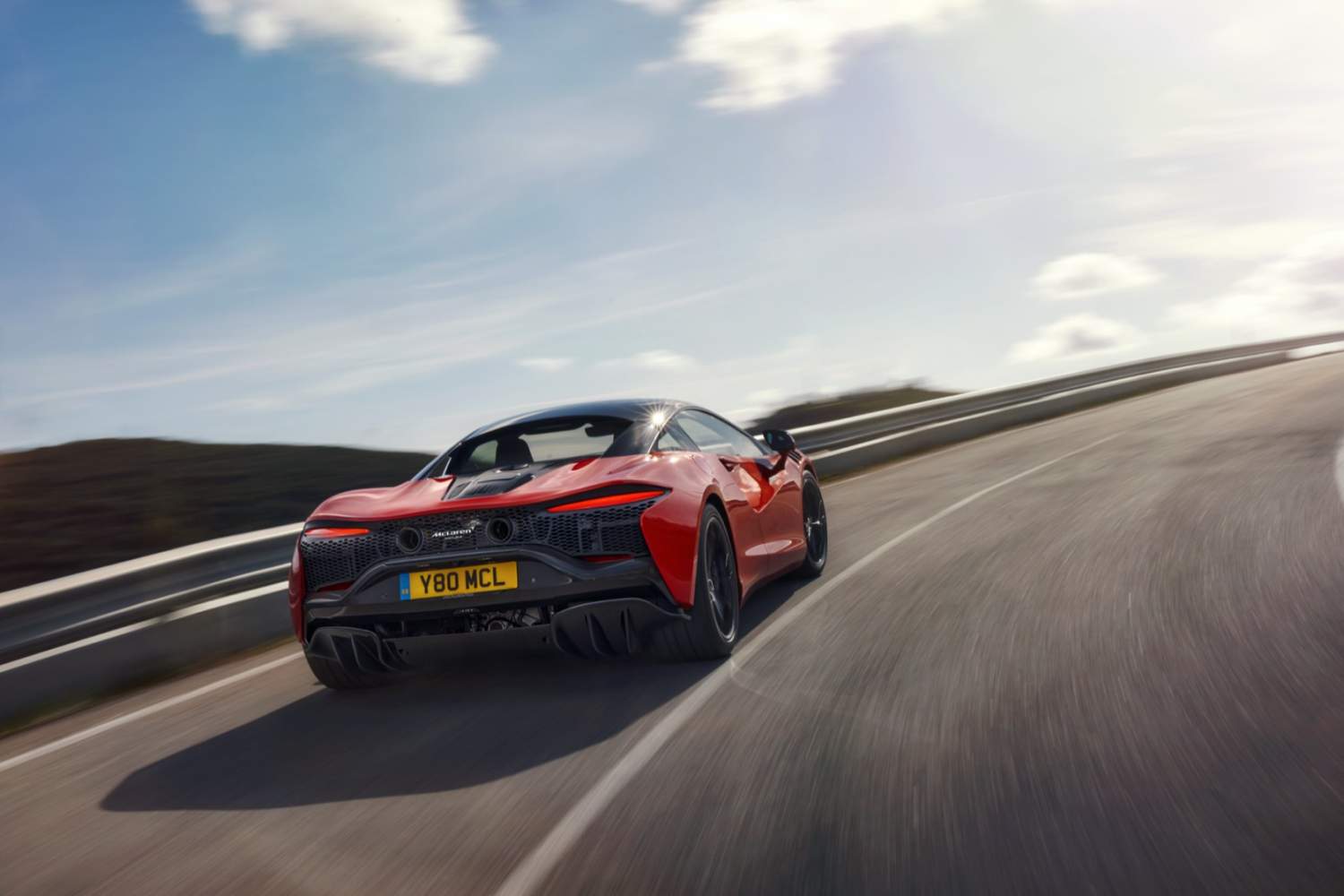 First, there’ll be electrification across the McLaren range. That’ll take lessons learned in the development of the Artura, and translate it across the automaker’s different niches: grand tourers, track beasts, and eye-catching convertibles. Beyond that, though, McLaren is planning a pure EV.

The roadmap for that doesn’t lead to a launch until the latter half of the decade, the automaker admits, but the gauntlet has absolutely been thrown down.