Only a handful of cars currently sold in the US qualify as the industry’s safest, the IIHS has said today, with tougher tests slimming the number of models that get its top award. The Insurance Institute for Highway Safety has been running its own crash tests in parallel to those of the NHTSA testing for decades now, most recently including small-overlap challenges that go beyond what the US government examines to model how vehicles handle real-world incidents. If you’re in the market for a new car, it makes for a list you should be reading.

It’s a small list, mind: only fifteen vehicles are getting the highest level of IIHS’ ratings. If that number sounds small, there’s a good reason for that. IIHS toughened up its testing requirements this past year, adding two new factors if cars want to qualify for the TOP SAFETY PICK+ award. Now, they need to have headlights the organization rates as “good” and passenger-side protection in small overlap front crashes that’s rated either “good” or “acceptable” too.

The latter was a fairly controversial addition by IIHS. While it had been testing driver-side small overlap front crash resilience since 2012, there were concerns that car makers were designing their crash structures specifically with that test in mind. However, at the same time, that could leave passengers without the same protection.

As for the headlights, IIHS only began rating them in March 2016. It looks at not only how well the low- and high-beams can illuminate the road for the driver, but how much glare they subject oncoming drivers to.

For small cars, the Kia Forte, Kia Soul, Subaru Impreza (in sedan and wagon form), and the Subaru WRX all took the TOP SAFETY PICK+ award. The Subaru Legacy, Subaru Outback, and Toyota Camry did the same in the midsize car segment, while the BMW 5 Series, Genesis G80, Genesis G90, Lincoln Continental, and Mercedes-Benz E-Class did so in the large luxury car segment.

As for SUVs, the Hyundai Santa Fe and Hyundai Santa Fe Sport were the only two that IIHS tested that got the top award. Only the Mercedes-Benz GLC grabbed it in the midsize luxury SUV space.

Still, if you’re willing to compromise on the new tests, you have a lot more choice. The TOP SAFETY PICK award has almost the same requirements in crash protection – including the driver-side small overlap front test – but doesn’t include the passenger-side version. It also allows for an acceptable headlight rating. Then, you get 47 more options. 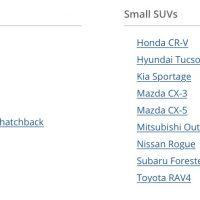 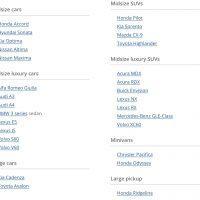 Nonetheless you might need to spend a little more, even if your model of choice is on the list. IIHS points out that few of the cars qualify for its awards unless options like emergency front braking and better headlamps are added. Toyota gets singled out for particular praise there, since it has made automatic braking standard on the majority of its vehicles. Other automakers have committed to eventually doing the same, but for the moment it’s often part of an optional safety upgrade.