IFTTT has updated its iOS app with location awareness, turning the iPhone into a motion-tracking trigger for smart home features, internet shortcuts, and general magical macros. The new app, released today, adds iOS Location Recipes to the “If This Then That” software for iPhone and iPad, using cellular, WiFi, GPS, and even Apple iBeacon position awareness that can be used to trigger “recipes” on the service such as Evernote logging or home automation. Meanwhile, though there’s still not an official Android version of the IFTTT app, a new third-party option with even more advanced geolocation for both platforms has coincidentally arrived.

The new official iOS app features build on the IFTTT iPhone app launched back in July, which at the time had integration with contacts, photos, and reminders on the phone. The new feature adds three new triggers, either when the phone enters an area, when it leaves an area, or when it moves in and out of that area.

The particular area itself can be pinpointed using a map and a loupe, with IFTTT apparently supporting positioned down to the building level, though that will presumably require some accurate location-awareness on the part of the iPhone itself.

Once that’s set, it works much as any IFTTT trigger does now, setting off just about anything you can think about. Common IFTTT uses include logging travel, turning on Philips hue lights, and tweeting out exercise, though more recently its been integrated into wearables like Glass and into Jawbone’s UP24.

Those over on Android feeling left out by IFTTT’s continuing absence of an app for Google’s platform aren’t entirely out of luck, however. LIFTTT has launched for Android and iOS this week, a third-party location/IFTTT mashup that effectively brings location triggers to Android as well. 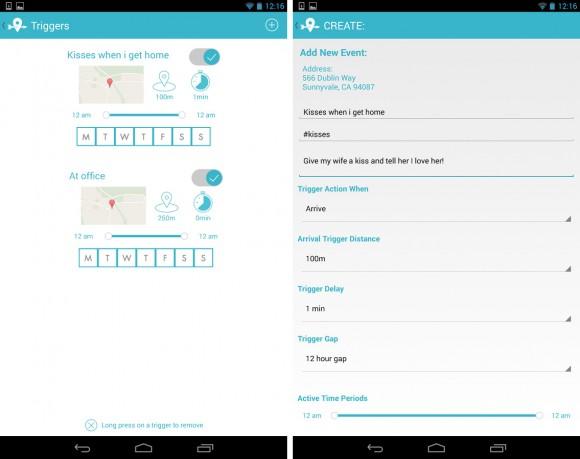 It’s not quite a streamlined a process as in the official IFTTT app – you have to set up a Gmail trigger as an intermediary, for instance – but once you’re up and running it’s particularly flexible. There’s granular control over geofence size, along with which days and times the triggers operate, though you’ll need to stump up $3 as an in-app upgrade to activate all the features.

Even if you’re on iOS, therefore, there might be a reason to opt for LIFTTT, since IFTTT lacks the useful scheduling system.