After announcements of OS X Lion and a massive amount of improvements in both this new operating system and the just-as-new iOS 5, Steve Jobs stepped on stage once more to speak: You like it so far? I’ll try not to blow it.” He spoke with love for this new project: “We’ve been working on this for some time. About 10yrs ago we had an important insight: we thought the PC would be a hub for your life, photos, music, content,” the name of which is, yep, you guessed it: iCloud.

Let’s continue with some quotes from Jobs: “Sync to your Mac and it will work fine. And it did, for the better part of 10yrs, but it’s broken down in the past few years.” Harsh! We’re still using it, Steve, but do continue on, by all means. “That’s because all your devices have photos, video, music. If I buy something on my phone, I have to sync it to get a song I bought. Then I have to sync to other devices, and do the same with photos… keeping these devices in sync is driving us crazy!”

Then came the big words on the future: “We have the solution: we’re going to demote the PC and Mac to be “just a device” – we’re going to move your digital life to the cloud” It’s all so digital! “Now, if I get something on my iPhone, it’s sent to the cloud immediately. Then it’s pushed down to my devices automatically, and now everything is in sync without having to think about it. I don’t have to be near my Mac or PC” 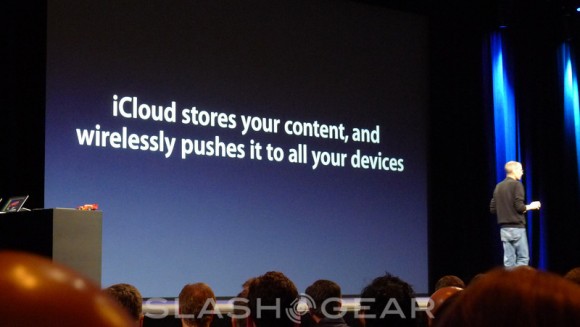 A quote appeared on the big screen at this point noting that “iCloud stores your content and wirelessly pushes it to all your devices.” Steve drove this point home with the following: “Some people think the cloud is just a hard disk in the sky, you transfer back and forth.” A jab at Google and Amazon. He continued, “We think it’s more than that, we call it iCloud. It’s complete integrated with your apps and there’s nothing new to learn. It just… works.” As all good Apple stuff does.

“You might ask, why should I believe them? They brought me MobileMe!”

No way Steve, but just for conversation’s sake, let’s ask it – why? “It wasn’t our finest hour but we learnt a lot. We threw away the Mobile Me contacts, calendar and mail apps, and have rewritten them from the ground up to be iCloud apps. When I make a new contact on my iPhone, it’s automatically brought up to the cloud and then pushed down to my devices. If I change it, it’s updated on all devices. Calendars works the same way – pretty cool”

Steve continued, “When I make a new contact on my iPhone, it’s automatically brought up to the cloud and then pushed down to my devices. If I change it, it’s updated on all devices. Calendars works the same way – pretty cool.” Calendars and music and all sorts of everything, oh my! Steve, what else could there possibly be? “Mail. It’s in the best shape of all. We give you a mail account at me.com, and your inbox and folders are kept up to date on all devices. But we’ve brought three more apps into the cloud universe. First, the App Store.” 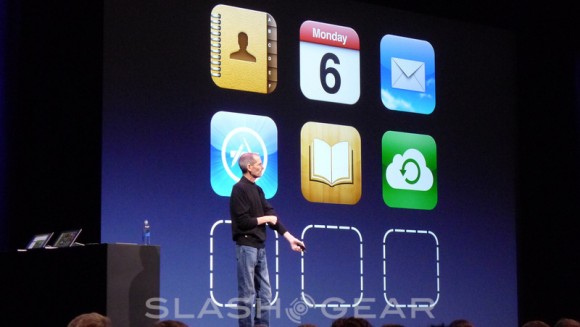 Steve details how you’re able to see your app purchases even if they’re not installed not he device you’ve got with you. You can see which ones you’ve got already payed for and download them instantly. This is a feature Google added a few months ago and it’s been going swimmingly thus far, and Steve mentions that they’d be expanding to iBooks. Note here though that Steve didn’t mention Android, your humble narrator did so you’re massively informed. Our faithful reporter Vince also mentions that it works like Amazon Whispernet, re-downloading content to multiple devices with the same user account.

Next is backup – “for those people who want to be completely PC-free.” Steve continues: “Once daily, we’re going to back up a lot of your important content to the cloud – if you get a new phone, everything will be loaded onto it automatically.” All of this wirelessly. 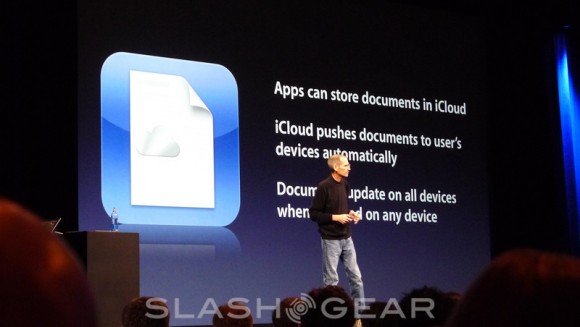 Steve noted the following on how Documents will work with iCloud: “If I create a Pages document, it’s uploaded and stores it in the cloud. It then pushes it to all the devices I have pages on. The same works for Numbers and Keynote”

Roger Rosner, VP of iWork was called up to the stage at this point to do a demo. He moves through a Keynote presentation that gives you the option to pull in documents from the cloud. He moves then to Pages on an iPhone where he’s slotted and continuing to slot in pictures from the Camera Roll. Rosner notes that when you edit items in this fashion, iCloud automatically syncs the latest version to your other iOS devices.

Works on Mac and PC 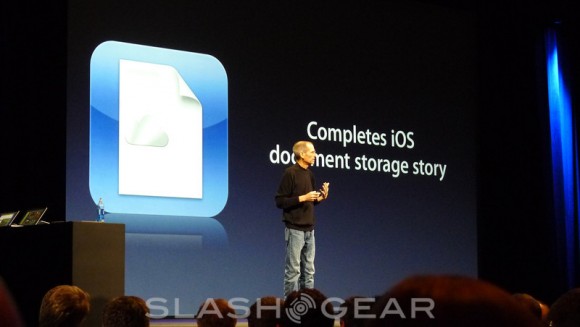 It was at this point that it happened: Steve steps back up onstage and lays down a bomb: this iCloud system as a whole will work with Mac AND PC computers. The slide up behind him notes that this situation “completes the iOS document storage story.” Steve notes “We’ve been working for ten years to get rid of the file system: when you teach someone to use a Mac, everything is fine until you get to the file system” He mentions that there will be new iCloud storage APIs so that developers can easily tie their apps into the iCloud storage system. APIs will be in place for documents and key value data. “We think this is going to be pretty big.”

Check out the rest of our iCloud coverage from [WWDC 2011] by hitting the portal link!