When we heard today that the folks at Syndicate Apps (a third-party developer group known for their fun pre-release Android antics) were creating an Ice Cream Sandwich launcher, we just had to get our hands on it as soon as possible. So when they dropped their first version of what we know at this moment may well be Ice Cream Sandwich, or Android 2.4 for handsets, as the developer team making this app call it, we went to downloading and now have a hands-on video for you to take a look at. What you’re going to see is a few different ways to launch apps, a slightly different look to the interface, and the way you can download this free launcher for yourself. 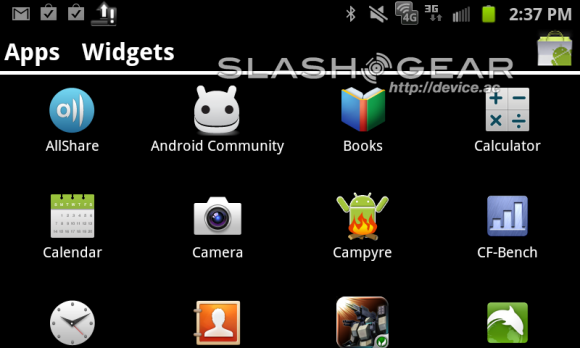 This launcher is built off of Syndicate Apps‘ Honeycomb launcher, which may make you feel like you’re in a tiny, tiny tablet. But what you’ll be able to see is the closest to reality version of Ice Cream Sandwich, again in its scientifically hypothesized state, that we’ve seen thus far. Have a look at the screenshots below, the video in this post, and note that it’s all done here on our brand new Samsung Galaxy S II Epic 4G Touch smartphone, a device which you can get a full review of by heading to Vincent Nguyen’s post from early last week.

You can download the Alpha version 1 of this application here at your own risk: ICS_2.4_Launcher.apk and open and install as you would any other third-party app not sold on the Android Market. Remember over and over again that this is unofficial, alpha in its version, and is largely untested. You’ll find bugs and broken bits galore, all of this set to be fixed in future versions of the app. We’ve only tested it on the GSII and it’s worked pretty well with the bugs I speak about in the video.