Hybrid and ZEV car prices could rise by up to $4,000 as battery technology fails to keep pace with dwindling federal tax credits, Toyota has warned, despite aggressive targets for low-emission cars in the US. Development of cheaper, more power-dense batteries are likely to bring down the cost of building cars like the Prius, Toyota’s Tom Stricker, VP of technology and regulatory affairs said, but countered that good news with the company’s own internal calculations that its cars – and those of competitors, like GM’s Volt and Nissan’s Leaf – could still end up costing between $2,000 and $4,000 more as subsidies and credits expire and are not reinstated.

The potential for price rises comes amid evolving public policy toward subsidizing the adoption of low- and zero-emission cars, Stricker pointed out. Targets are ambitious: the Zero-Emission Vehicle requirements – led by the state of California – demands 15-percent of new sales be emission free, such as total-electric or fuel-cell models, by 2025.

That’s going to mean a lot of sales over the next 12 years, Stricker warned, and while Toyota is “bullish” on fledgling technologies like fuel-cells, it’s still unclear whether such cars will find sufficient consumer demand. In California, for instance, where sales of plug-in and ZEV cars are most common, manufacturers like Toyota will need to triple sales by 2025 in order to meet the 225,000 unit target.

However, in other states where take-up of eco-friendly cars has been less enthusiastic, car companies will need to increase sales by 5-8x, Stricker said, in order to fulfill the EV obligations.

The potential benefit from government tax credits and other incentives should not be underestimated, the Toyota VP argued. Back when the company launched the first-gen Prius in the US, in 2000, and when Honda’s Insight was on the market, Toyota saw sales of its hybrid jump tenfold when regulators introduced subsidies, for instance.

However, the same might not be the case for Toyota’s three existing ZEVs – the iQ, the plug-in Prius, and the RAV4 EV – or its upcoming fuel-cell car due to be shown off in the US for the first time at CES 2014 next January. “The conditions, the market, are very different for [ZEVs] compared to what hybrids faced in the early years” Stricker said.

Improvements in battery technology since the first Prius hit roads in Japan in 1997 will make some difference. Toyota estimates cost reductions of $275/kWhr for batteries, in fact, which will contribute to lower overall costs of manufacture. The current, third-gen Prius offers 4x the battery power-density of the first-gen model, for instance, and 38.5-percent more thermal efficiency, and Toyota is estimating that the fourth-gen Prius will offer over 40-percent thermal efficiency. 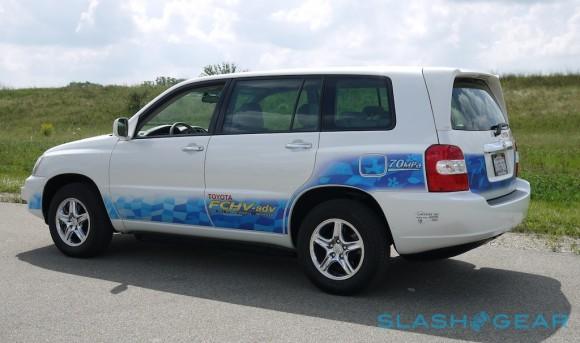 Part of Toyota’s strategy has been to effectively flood its range with hybrids and ZEVs, an approach which has been criticized by some as diluting the brand. In fact, Stricker argues, it’s an essential path for the number one global car company to take if it wants to have any significant impact on reducing its overall fuel economy ratings.

“Consumers like hybrids” he pointed out. “It’s really hard when you sell 5m vehicles or more, to change your fuel economy ratings by selling 2,000-3,000 efficient cars more. You really have to sell a lot to even move the needle on economy.”

One possibility – or hope – is that rising fuel prices in the US will help encourage drivers to follow their Japanese cousins behind the wheel of more economic cars. In Japan, current subsidies for cars like the Prius only amount to around $1,500 per vehicle, Toyota Motor Corporation global communications department general manager K.C. Kirimoto said, but gas prices roughly twice those in the US have helped Toyota’s hybrids take 40-percent of the company’s sales in the country.

While no official figures exist, Toyota calculates that hybrid cars in general hold 80-percent market share in Japan. In fact, the Prius has been the best-selling car in Japan from 2009 through to 2012, and was only dethroned in 2013 by the Prius C, the company’s newer plug-in variant.

In the meantime, Toyota continues to work on improving power management, including beginning trials of wireless recharging systems next year that would free drivers from having to plug in their cars when they’re parked up. Even so, the future of hybrids and ZEVs is far from certain.

“There’s always going to be that group of folks, the early-adopters, who can afford it, who’ll gravitate to this market” Stricker concluded, also taking care to point out that Toyota’s figures suggest that, compared to the Volt and Leaf, the Prius is likely to be affected least by the potential price increase. “But battery cost reductions are one of the key things that everybody in the industry needs to work towards. To get more range, and to make the vehicles more affordable for what you get out of them.”