Bot the NASA/ESA Hubble Space Telescope and the NASA Spitzer Space Telescope have been used to study a collection of 10 planets. Each of these planets is Jupiter-like. They look similar, but come in a wide array of different colors. Gasses are present, and heat – lots and lots of heat. Each orbits very close to its host star, making their study far more difficult than the average non-gas planet. The image you’re seeing here is an artist’s rendering of the hot 10 – in reality we’re only able to see them in very, very tiny dots.

Both the Hubble and Spitzer space telescopes aided in the study of this set of 10 hot planets. Each has a different size and temperature, and together they constitute the largest study of planets of this nature in history. Lead author of the study David Sing of the University of Exeter, UK, spoke up this week on the publication of said bit of research.

“I’m really excited to finally ‘see’ this wide group of planets together,” said Exeter, “as this is the first time we’ve had sufficient wavelength coverage to be able to compare multiple features from one planet to another.”

“We found the planetary atmospheres to be much more diverse than we expected.”

View the rendering above much larger by tapping the thumbnail below: 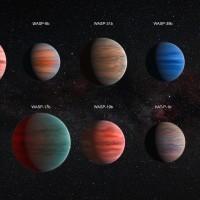 We’re not able to see the planets themselves in nearly as great a detail as the artist’s rendering above. Instead, these scientists see the planets via sunlight that travels through each planet’s atmosphere, leaving a “unique fingerprint on the starlight, which we can study when the light reaches us,” said Hannah Wakeford, now at NASA Goddard Space Flight Center, USA, co-author of the research.

In the past, studies of exoplanet atmospheres had been difficult – especially on planets like the Jupiter-like bodies we see here. This study opens the door for much more in-depth studies of such planets in the future.

More information can be found in the paper “A continuum from clear to cloudy hot-Jupiter exoplanets without primordial water depletion” as published this week by the journal Nature by authors David K. Sing, Jonathan J. Fortney, Nikolay Nikolov, et. all under code: doi:10.1038/nature16068.