Huawei MediaPad X1 may be the Android tablet to beat

Huawei has revealed its latest tablet, the MediaPad X1, billed as the lightest and slimmest Android slate around, to the point where the Chinese company hopes you’ll hold it to your ear to make calls. Announced at MWC 2014 today, the MediaPad X1 raises the Android tablet stakes with its full aluminum chassis measuring 7.18mm thick and tipping the scales at 239g, despite being fronted by a 7-inch 1920 x 1200 LTPS touchscreen.

Inside, there’s a 1.6GHz HiSilicon Kirin910 quadcore processor, though sadly it doesn’t get the latest version of Android to play with. Instead, Huawei will launch the MediaPad X1 running Android 4.2 Jelly Bean, though the company does suggest that you can get more than five full days of continuous use out of a single charge.

That’s down to the 5,000 mAh battery, which Huawei says is also good for up to 21 days of standby. If they turn out to be accurate figures for real-world use, it’ll make for an impressive tablet. 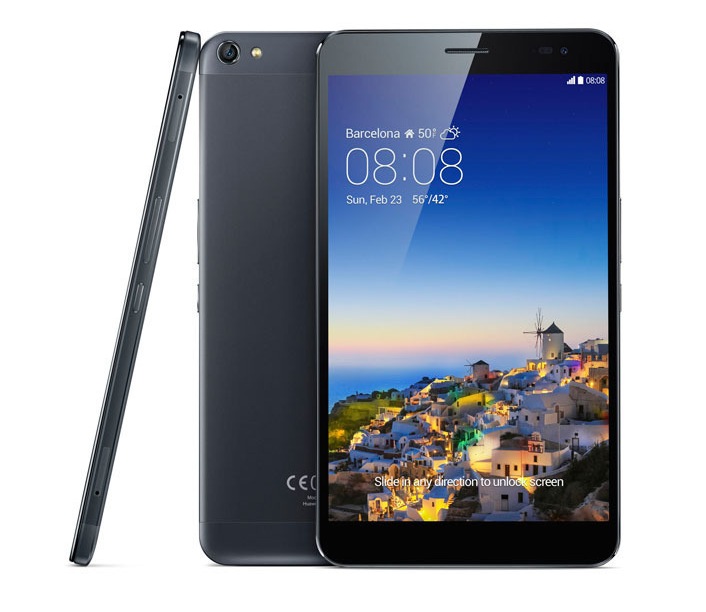 Elsewhere, there’s a 13-megapixel, f/2.2 camera using Sony’s Exmor R BSI sensor on the back, complete with panoramic photo-taking and a 28mm wide-angle lens, while a 5-megapixel camera is on the front, with an f/2.4, 20mm lens. That uses Huawei’s own self-focus system and hands-free control, which gives guidance on how to take the perfect selfie; then you can switch through the 10-stage Beauty Shot editing tool (which first horrified us back on the Ascend P6) to iron out the wrinkles.

Also inside is 2GB of memory and Cat4 150Mbps LTE, though Huawei is yet to confirm which bands it will support, as well as WiFi and Bluetooth. 16GB of onboard storage is paired with a microSD card slot, and there’s WCDMA/GSM voice call support, if you’re brave enough to hold the X1 to the side of your face.

Huawei says the MediaPad X1 will go on sale in China, Russia, Western Europe, the Middle East, Japan, and Latin America from March 2014. The possibility of a US launch is yet to be confirmed, but Huawei says the X1 will be priced at €399 ($548) in Europe.