Though we now know that the first ever officially Google licensed Android 4.0 Ice Cream Sandwich tablet is ASUS’ Transformer Prime, there’s certainly going to be a list of incoming tablets sooner than later with that same certification – Huawei’s MediaPad has just been announced to be another of those devices. This tablet has been previously announced, but now it’ll be pre-loaded with the new Android 4.0 Ice Cream Sandwich out of the box. This is the latest version of the MediaPad, then there’s also the Color Series which come in shadow black, classic brown, and passion pink.

So there’s two different tablets, one that’s not pictured because it’s not a brand new form factor and the color series which is pictured above. The color series, for one reason or another, comes with Android 3.2 out of the box. Those that already own a MediaPad will receive an over the air update to Ice Cream Sandwich inside the first quarter of 2012.

All of the MediaPads come with a lovely 1280 x 800 pixel display, that being 217 pixels per inch, they also having 1080p full HD video playback for awesome viewing of videos galore. These tablet also have a Qualcomm dual-core 1.2GHz processor and a battery that’ll last you a full six hours. Prepare yourself for powerful colors and high definition coolness soon! 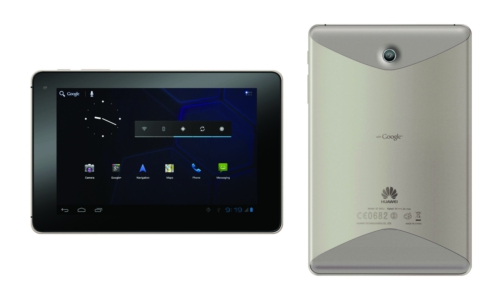