If the Mate Xs’ unfolding 8-inch screen isn’t quite enough tablet for you, the Huawei MatePad Pro may do the trick. The company’s latest tablet looks a whole lot like Apple’s iPad Pro, certainly, but try to ignore that and you’ll find a sleek 10.8-inch Android slate tipping the scales at just 492 grams.

That display is surrounded by a skinny 4.9mm bezel, which Huawei says is enough to give the MatePad Pro a 90-percent screen to body ratio. It’s 2560 x 1600 resolution, DCI-P3 wide color gamut compliant, and promises 540 nits of brightness.

It’ll work with the new Huawei M-pencil, which the company says has a new composite tip for smoother writing and sketching. Up to 4,096 levels of pressure sensitivity can be tracked, and it magnetically clings to the top of the MatePad Pro both for transport and charging. 30 seconds in place is enough for 10 minutes of use; similarly practical, it’s hexagonal so that it won’t roll away on your table.

Tapping the screen with the M-pencil automatically wakes the table and loads the Notepad app. There’s also search across handwritten notes. If you’d rather type, Huawei has a magnetic keyboard which supports the slate at two angles. It has 1.3mm keyboard travel, and will wake/sleep the tablet when opened or closed.

Inside there’s Huawei’s Kirin 990 chipset, with Mali-G76 graphics. Various configurations will be offered, with either 6GB or 8GB of memory, and between 128GB and 512GB of storage. Huawei will also have a MatePad Pro 5G, with integrated 5G connectivity. 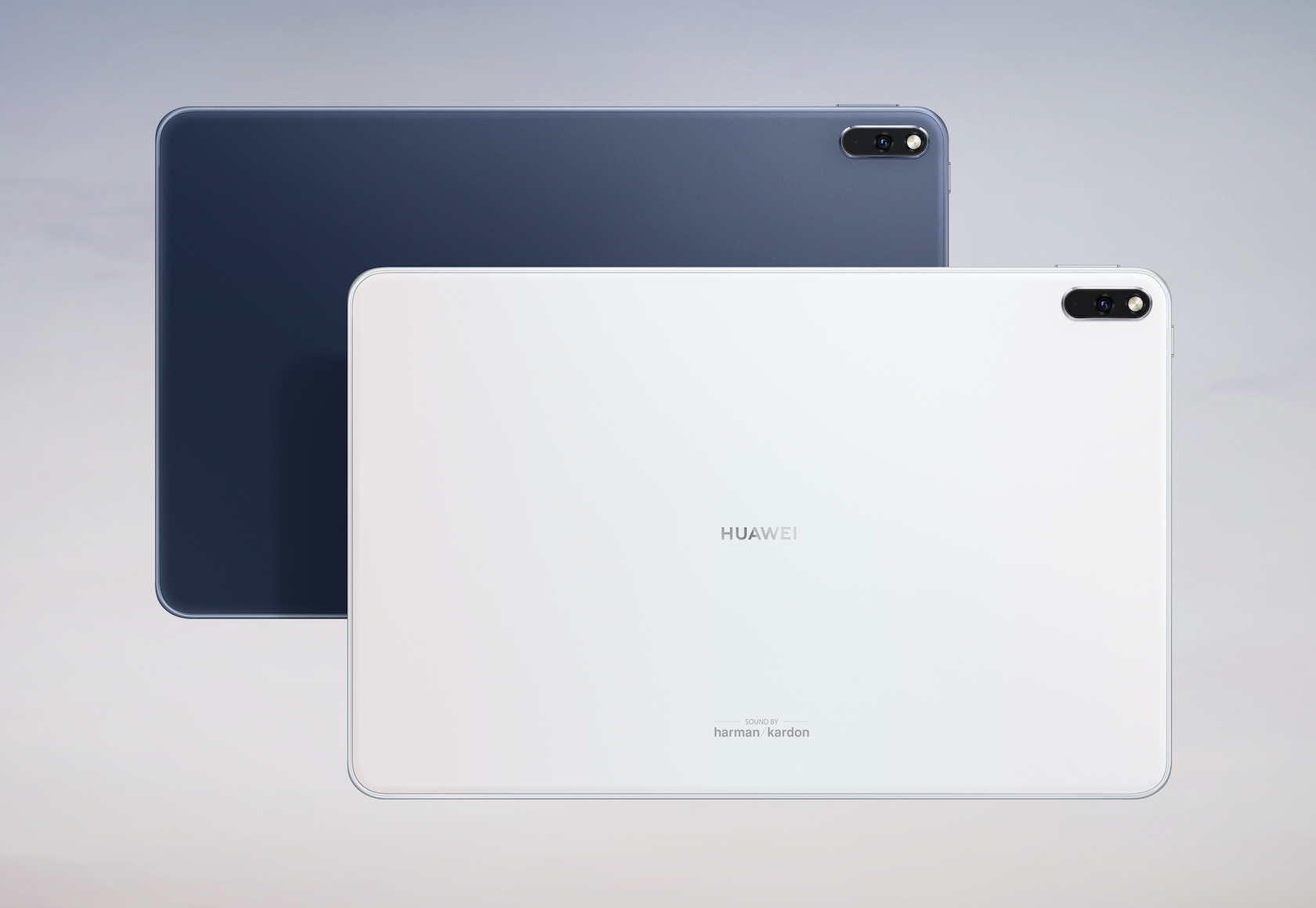 On the software side, it’s Android 10 with Huawei’s EMUI10. As we’ve seen on earlier Huawei tablets, that supports two different interfaces depending on how you’re using the slate. Tablet Mode is designed for finger use when handheld, while PC Mode looks more like a Windows desktop.

Either way you get multi-window support, together with split screen. Huawei allows you to open multiple copies of the same app, too, so you could have two iterations of the browser open side by side.

The 7,250 mAh battery is rated for up to 12 hours of use, Huawei says, and it supports 20W fast charging for up to 3 hours of use after 30 minutes plugged in. Alternatively, there’s 15W wireless charging, and 7.5W reverse wireless charging. That means you can top up another device from the MatePad Pro’s own battery.

As for cameras, there’s a 13-megapixel rear camera with f/1.8 aperture, autofocus, and an LED flash. The front camera – a hole punch in the corner of the display – is 8-megapixel with f/2.0 aperture and fixed focus. There are quad speakers, and USB-C connectivity. 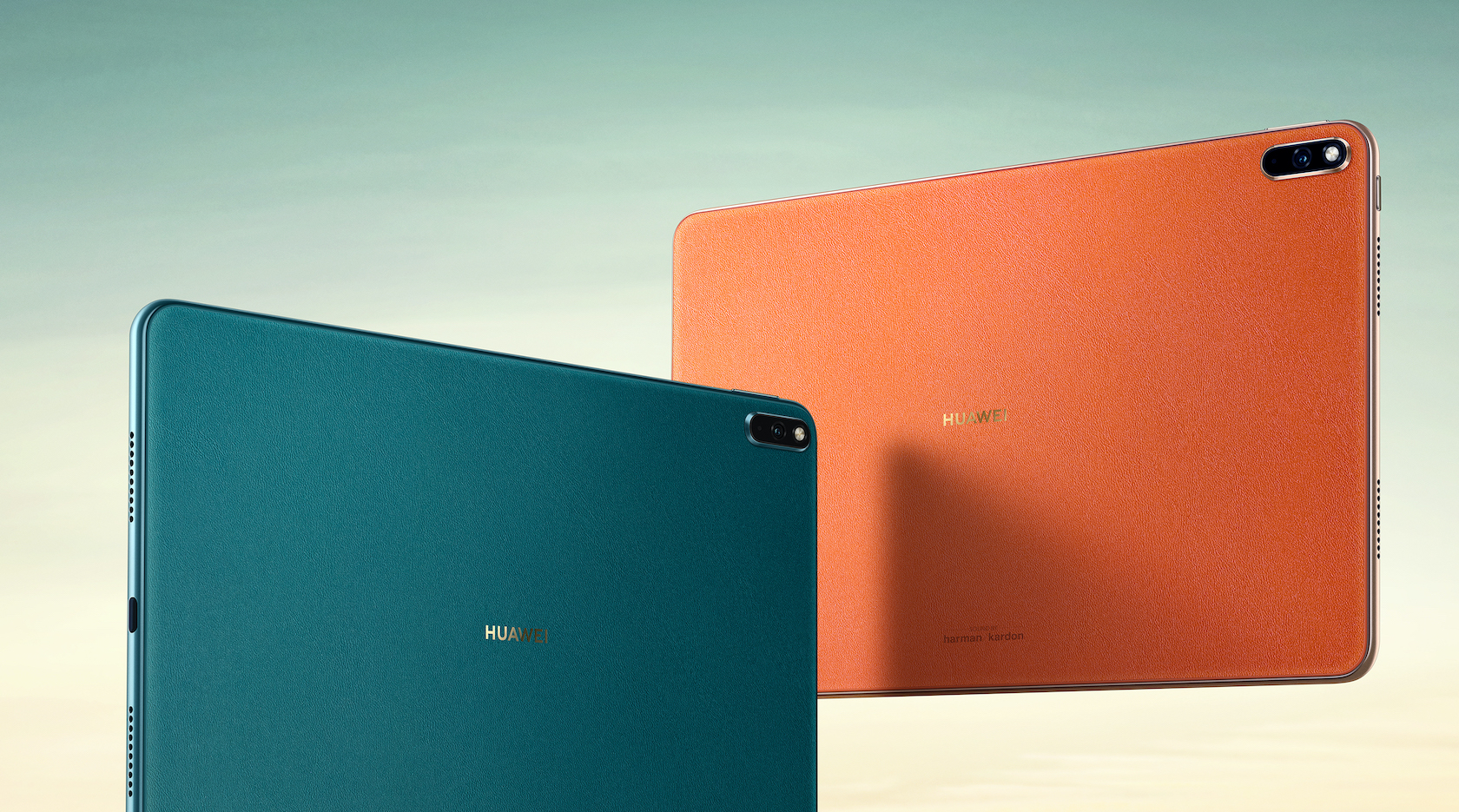 Huawei will have four finishes of the MatePad Pro. Midnight Grey and Pearl White each have a glass fiber coating, to give them a little extra shimmer. Orange version is more matte, while Forest Green is wrapped in vegan leather. The MatePad Pro 5G will be offered in Orange and Forest Green only.

The MatePad Pro will start at 549 euro ($600) when it goes on sale from April; Huawei says it’ll be offered in select markets in Asia Pacific, EMEA, Russia, Japan, and Latin America. An LTE version will start at 599 euro ($650).

As for the MatePad Pro 5G, that’ll start at 799 euro ($870) in 8GB/256GB form, or 949 euro ($1,030) in 8GB/512GB form. Huawei says it will go on sale from June, in select markets including China, Asia Pacific, EMEA, and Latin America. No word on a US launch, though given Huawei is still blocked from using Google services – including the Play store – that’s probably not going to be a big deal.