HTC have unveiled their latest Android smartphone, the HTC Wildfire, an entry-level model intended to replace the Tattoo.  Packing Android 2.1 together with HTC Sense, the Wildfire has a 3.2-inch QVGA capacitive LCD touchscreen, 5-megapixel autofocus camera with LED flash, optical trackpad and a new app called Application Sharing.  We grabbed some hands-on time ahead of the official launch; check out our first-impressions after the cut.

Compared to the Tattoo, the Wildfire does feel like a step up.  The HTC design heritage is obvious: from the front and sides the handset looks like a blend of the HTC Desire and Google Nexus One, while the back is reminiscent of the HTC HD2 with its contrasting horizontal panel running across the phone.  At 3.2-inches the display is the same size as that of the Legend, though it’s lower resolution and can be a little pixelated; you’ll definitely need to zoom in on webpages in the browser before you can comfortably read body-text. 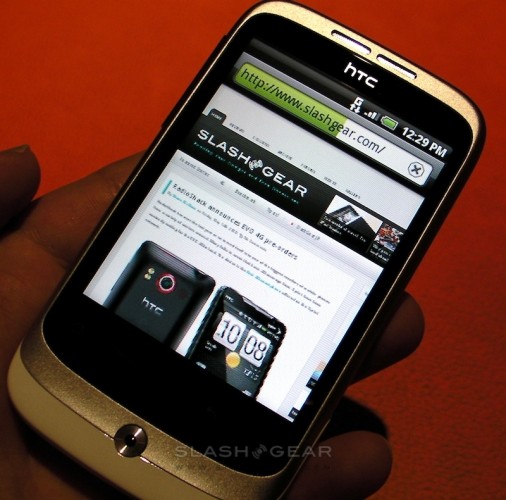 Specifications include the usual array of Bluetooth, WiFi b/g and GPS, together with European-spec UMTS/WCDMA for data connectivity.  There’s also a microSD card slot under the battery cover and a 3.5mm headphone jack on the top edge.  The battery is a 1,300mAh pack, though HTC aren’t quoting estimated runtimes as yet.

While Application Sharing may sound like some exciting remote multi-player gaming system, in actual fact it’s merely a way to tell other Android users about apps you’re enjoying.  You can choose different titles installed on your phone from a list, then send out an update from the usual “Share” menu; that means via email, SMS, Twitter or through any other social networking app you may have loaded.  HTC say they’ve kept the functionality simple so that no matter what brand of Android phone your friends are running, they’ll be able to read the message and hit the link to go straight to the app in the Android Market.  There’s a demo of Application Sharing in the video below.

Other software changes are minor.  HTC have added to their calling display, so that a contact’s latest Facebook status is shown on incoming and outgoing calls as well as their photo, but other than that it’s Sense as we’ve seen on the Legend and Desire.  The company says they’ll be looking at rolling out the tweaks to other handsets in due course.  The capacitive display makes a significant difference to usability in comparison to the Tattoo’s resistive panel, and we were pleased to hear HTC’s Eric Lin say that, as far as he’s aware, there are no plans for resistive panels to be used in future handsets from the company.  Similarly, HTC intend to keep using Sense rather than pushing out a barebones Android device of their own, using the UI as a differentiator from the rest of the market.

Speed-wise, the Wildfire uses the same 528MHz Qualcomm processor as the HTC Hero, though with the 3D graphics and effects stripped from Sense, and the relatively low-resolution display, things are kept moving at a reasonable pace.  It should also help keep the price down, as does the absence of contact charging points on the base of the handset (instead the microUSB port is on the side).  It’s not as slick or satisfying an experience as, say, we found the Desire to be, but then again it’s targeted at the “my first smartphone” market and – viewed by those criteria – holds up well.

The Wildfire is expected to go on sale in Europe come Q3 2010; no word on official pricing as yet.  As you can see from our hands-on photos, it’ll arrive in black, white, red and brown.

Share apps, updates and experiences with the latest social powerhouse from HTC

HTC Corporation, a global designer of smartphones, today introduced HTC Wildfire™, a new HTC Sense-based Android phone that integrates the most popular social networks to help bring your friends closer to you. HTC Wildfire closely follows the success of the acclaimed HTC Desire and makes the company’s signature HTC Sense experience accessible to a younger audience.

“Today’s social networks provide an essential forum for friendship with more than 400 million users* – many of whom are young adults – actively sharing their lives with their friends through Facebook,” said Florian Seiche, Vice President, HTC EMEA. “HTC Wildfire makes the HTC Sense experience available to young mobile users for the first time. It brings all your communications into one place, whether it’s through Facebook, Twitter, text messages, images or email, ensuring that you are never far away from the conversation and always close to your friends.”

HTC Wildfire helps you stay connected with those who are most important to you through HTC Sense, a user experience focused on putting people at the centre by making phones work in a more simple and natural way. You won’t miss out on the fun as HTC’s Friend Stream application seamlessly gathers and displays content from social networks like Facebook, Twitter, and Flickr into one organised stream of updates. HTC Wildfire enables you to stay up to date with your friends’ posts, comments, alerts and photos, wherever you are.

In addition, each contact viewed in HTC Wildfire’s address book includes a thread of recent communications with that person, including when you last spoke, recent text messages and emails, and social network updates. When your friend calls, HTC Caller ID displays their Facebook profile photo and latest update, as well as a reminder if their birthday is fast approaching.

Thanks to a new app sharing widget, HTC Wildfire enables you to recommend an application by email, text message or over social networks. Your friends will receive a link allowing them to find the application on the Android Market with a single click and download it to their phone.

Florian Seiche continued, “We understand that people need a better way to navigate their way through the tens of thousands of applications that are currently available on the Android Market. In fact, our own independent research found that consumers are not only hungry for the latest and most popular applications that their friends are using, they want an easier way to find and download them. For the first time ever, you can recommend the newest and coolest apps to a friend or group of friends with HTC Wildfire. With so many applications to choose from, there’s a world of content to discover and pass along to your friends.”

HTC’s latest advanced smartphone is great for viewing and sharing photos on Flickr and for surfing the internet thanks to its 3.2-inch capacitive touch screen. A five-megapixel camera with auto focus and LED flash allows you to capture special moments, while a 3.5mm audio jack and micro SD card slot mean you are never without your favourite songs.

Availability
The new HTC Wildfire will be broadly available to customers across major European and Asian markets from Q3 2010.

About HTC
HTC Corporation (HTC) is one of the fastest growing companies in the mobile phone industry. By putting people at the centre of everything it does, HTC creates innovative smartphones that better serve the lives and needs of individuals. The company is listed on the Taiwan Stock Exchange under ticker 2498. For more information about HTC, please visit www.htc.com