HTC Sense 3.0 UI Only For New Devices, Not Completely True

The recent announcement of the HTC Sensation brought with it an enhanced 3.0 version of their slick HTC Sense user interface built on top of Android. Unfortunately, the company let it slip last night via Twitter to a curious customer that the HTC Sense 3.0 will only be available to its newest devices—the Flyer, EVO 3D, and Sensation.

The news may be disappointing for folks who recently picked up a Desire S or Incredible S and find themselves not able to upgrade to the new and improved interface. According to the HTC spokesperson in the tweet, the reason for the restriction lies in the hardware requirements of HTC Sense 3.0.

The new interface will support many new 3D effects including 3D widgets along with smart shortcuts on its new set of multi-functional lock screens, and 360-degree menu carousels. It’s likely that the new processing power required to smoothly run the new interface is what older devices such as the Desire S and Incredible S are missing.

However, this morning, another official tweet from HTC followed up to clarify their statement from last night. The new message says that only certain aspects of the HTC Sense 3.0 will not work on older devices, but not all. And they are in fact working to incorporate the other aspects that will work with older devices. 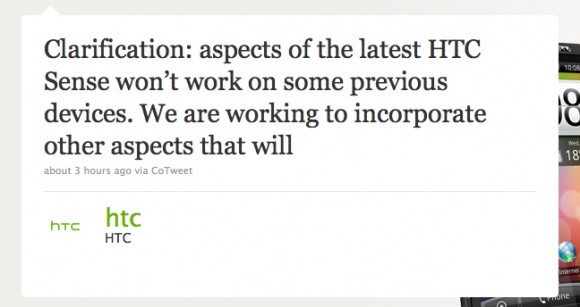 Exactly which those are and when customers may receive the updates is all up the air at this point. But at least those customers are not completely shut out from the new features of the updated interface. Check out the video below for a taste of Sense 3.0.